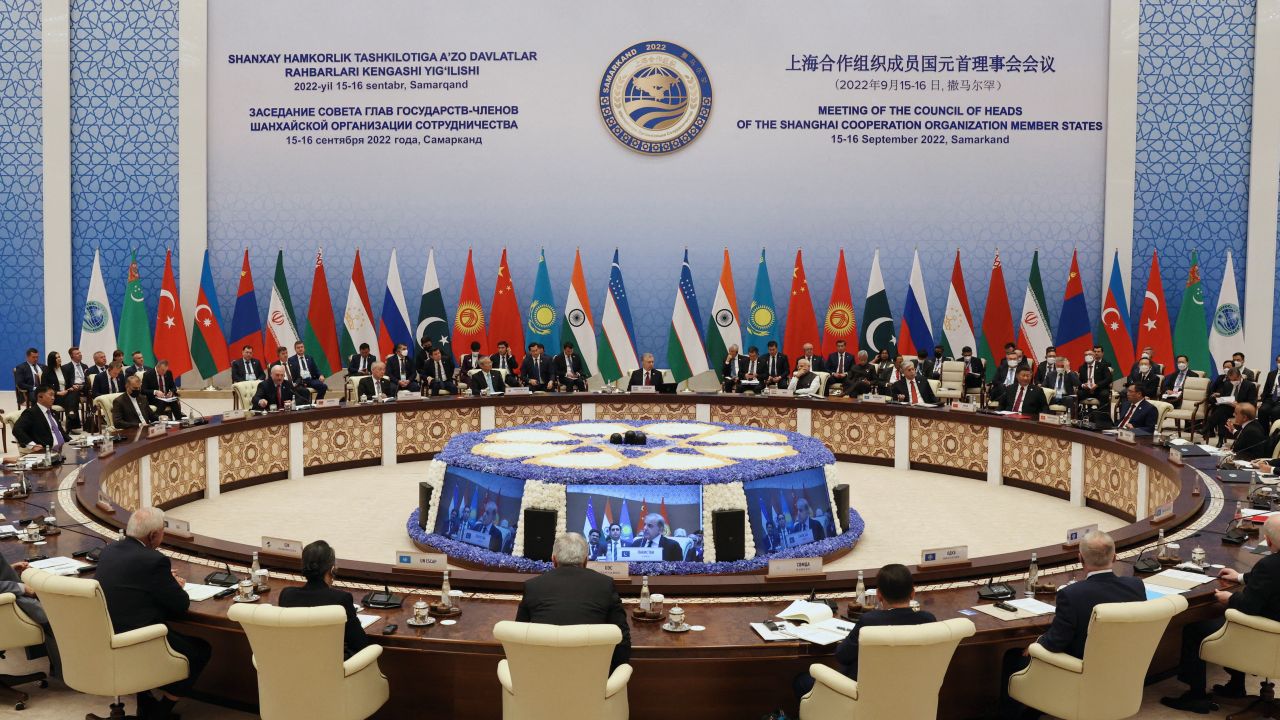 Meeting of the Council of Heads of the Shanghai Cooperation Member States (SCO) held in Uzbekistan (Photos: Representative photographer/Reuters/Aflo)

On September 15, 2022, the Xi-Putin summit took place in Uzbekistan, where the SCO meeting was held. Prior to that, Xi Jinping visited Kazakhstan and held talks with the leaders of many member countries in Uzbekistan. The only time there was no smile on his face was during his meeting with Putin. Here, I will decipher the Chinese and Russian strategies that operate behind the scenes.

We can surmise that there were four main reasons.

The purpose of Xi Jinping’s visit to Kazakhstan on September 14 is clearly the aforementioned No. 2.

President Kassym-Jomart Tokayev of Kazakhstan has been publicly opposed Russia’s invasion of Ukraine. Despite receiving military aid from Russia when he crushed a coup-d’état led by supporters of former President Nursultan Nazarbayev in January 2022, Tokayev refused to justify Russia’s invasion of Ukraine when he attended the St. Petersburg International Economic Forum on June 20. Tokayev has also visited Azerbaijan to propose and seek cooperation regarding the construction of pipelines that bypass Russia and a transportation route via the Caspian Sea.

Furthermore, the US unveiled the “C5+1” concept in 2015. An inter-agency delegation led by Donald Lu, US Assistant Secretary of State for the Bureau of South and Central Asian Affairs under the Biden administration, visited the Kyrgyzstan, Uzbekistan, Tajikistan, and Kazakhstan from May 23 to 27, 2022 (described in Central Asia in Turmoil over Ukraine War: “A Romance of Three Countries” between the US, China, and Russia, by Homare Endo, published on June 12, 2022).

Furthermore, Tokayev had also recently welcomed the US Congressional Delegation on September 2, 2022.

Putin and Xi likely held behind-the-scenes talk, which led to Xi visiting Kazakhstan, because Putin prefers that Kazakhstan remains closer to China than the West.
Tokayev met Xi on a visit to China in September 11, 2019, and speaks Mandarin, having previously studied at Beijing Language and Culture University. He also attended the Beijing Winter Olympic Games on February 4, 2022.

Xi received an extraordinary welcome during his recent visit to Kazakhstan, where he was entertained with courtesy and fervor akin to an emperor by Tokayev, and awarded the Order of the Golden Eagle, which is the highest honor in Kazakhstan among nomadic peoples.

On September 15, Xi arrived at Samarkand, Uzbekistan to take part in the SCO Summit. Uzbekistan’s President Shavkat Mirziyoyev’s lavish welcome of Xi rivalled Tokayev’s in its enthusiasm, as he presented Xi with the Order of Supreme Friendship.

On his part, Xi was all smiles that could not have been more expressive in the presence of the two presidents.

Xi also met with the premiers of many SCO member countries including Kazakhstan, Uzbekistan, Kyrgyzstan, Turkmenistan, Tajikistan, Russia, Mongolia, Belarus, Azerbaijan, Iran, Turkey, and Pakistan. A big smile was on his face at all of these meetings.

◆Xi Jinping Had No Smiles for Putin

His smile disappeared completely, however, when he met Putin.

The sudden change in his expression was clearly unnatural, as if he feared that if he smiled at Putin, he could be condemned for supporting Russia’s invasion of Ukraine. An unsmiling meeting between the presidents of Russia and China, who have been so close, is simply inconceivable. A video of the meeting can be viewed here.

China’s state media network Xinhua News Agency published a transcript of the discussion at the State Guest House in Samarkand in the afternoon of September 15. According to the report, the two had a conversation which has been summarized below.

Xi: China and Russia have maintained effective and strategic communication and collaborated in various areas. China wishes to work with Russia to demonstrate its responsibility as a major world power, play a leading role, and bring stability to a turbulent world [rest omitted].

Putin: I wish you success of the 20th National Congress of the Chinese Communist Party. I am confident that the Chinese economy will continue to prosper under the leadership of General Secretary Xi Jinping. Although the world is changing in many ways, one thing does not change―the friendship and trust between Russia and China. Russia adheres to the “one China” principle, and condemns provocation and instigation by other nations against China with regard to its core interests. Russia wishes to work with China in many areas such as economy, trade, and energy resources (summary quote ends here).

While not included in China’s announcement, a Russian release stated that Putin also said: “we are grateful that our friends in China are taking an objective stance on Ukraine, and understand that you have doubts and concerns about this matter (the Ukraine crisis).”

China has tried to ensure that the word “Ukraine” is not mentioned even once, but prior to his overseas trip, China’s Global Times, a newspaper with Communist Party connections, published an editorial stating that China refuses to become involved in the war in Ukraine at all costs.

That being said, a statement by the Chinese Communist Party’s No. 3, Li Zhanshu at a meeting with the heads of Russia’s Federal Assembly commands attention. Li visited Russia from September 7 to 9 as Chairman of the Standing Committee of the National People’s Congress, taking part in the Eastern Economic Forum in Vladivostok and meeting the heads of the two houses of Russia’s Federal Assembly in Moscow. At the meeting, Li commented: “China has stated that we understand and support Russia with regard to the situation in Ukraine.” He added, “We also understand how NATO has driven Russia to the point where Russia was forced to make an important decision (meaning the invasion of Ukraine).” This is likely to be China’s honest opinion.

Nonetheless, as a result of behind-the-scenes talks, Xi decided to put on an act without any smiles at his face-to-face meeting with Putin.

Proof of this interpretation is that the Russian Embassy in China posted on Weibo that Xi and Putin met unofficially one on one after the official meeting. Screenshots are shown below, because users must be registered to access the information.

What I have written so far is proof of reason No. 3 above.

Xi and Putin have a strategy of making it appear that they are not on friendly terms to reassure the Central Asian countries. By praising Xi and drawing attention to him, Putin is attempting to strengthen solidarity among SCO member countries and prevent them from moving closer to the West.

The SCO Summit ended late afternoon on September 16 (Japan time). Iran was officially approved as a new member and the Samarkand Declaration of the Heads of State Council of the SCO contained the words: “They stressed that the unilateral application of economic sanctions other than those adopted by the UN Security Council is inconsistent with the principles of international law and adversely affects third countries and international economic relations.” All member states are opposed to US economic sanctions and sanctions imposed by Western countries aligned with the US, and have not themselves applied sanctions to Russia. The combined population of SCO member states accounts for 50% of the global population. Purely in terms of humanity, they are a significant force in the international community.

We should not ignore the fact that 85% of the world’s population live in countries that have not imposed sanctions on Russia (described in the column Russia Proposes ‘New World G8,’ a World Not Visible to the Japanese by Homare Endo, published on June 19, 2022)

A Japanese-language media article was published in Japan on September 17, 2022 with the title “India’s Prime Minister Narendra Modi criticizes Russia’s invasion of Ukraine: ‘Today’s era not an era of war.’” Reading the original Reuters article, the content has a slightly different nuance from the Japanese headline. The article quotes an announcement by the Indian government, which simply says: “In the context of the ongoing conflict in Ukraine, (the) Prime Minister reiterated his call for an early cessation of hostilities and the need for dialogue and diplomacy.”

It is clear from the video on Modi’s official website that the report by the Indian government is the correct one.

It reveals that there is significant disparity between what Modi actually said and the Japanese news report, which dressed up the Reuters report in words that would please Japanese readers.

This example illustrates the need to gather facts from multiple sources when making a call on international affairs to protect the interests of the Japanese public.