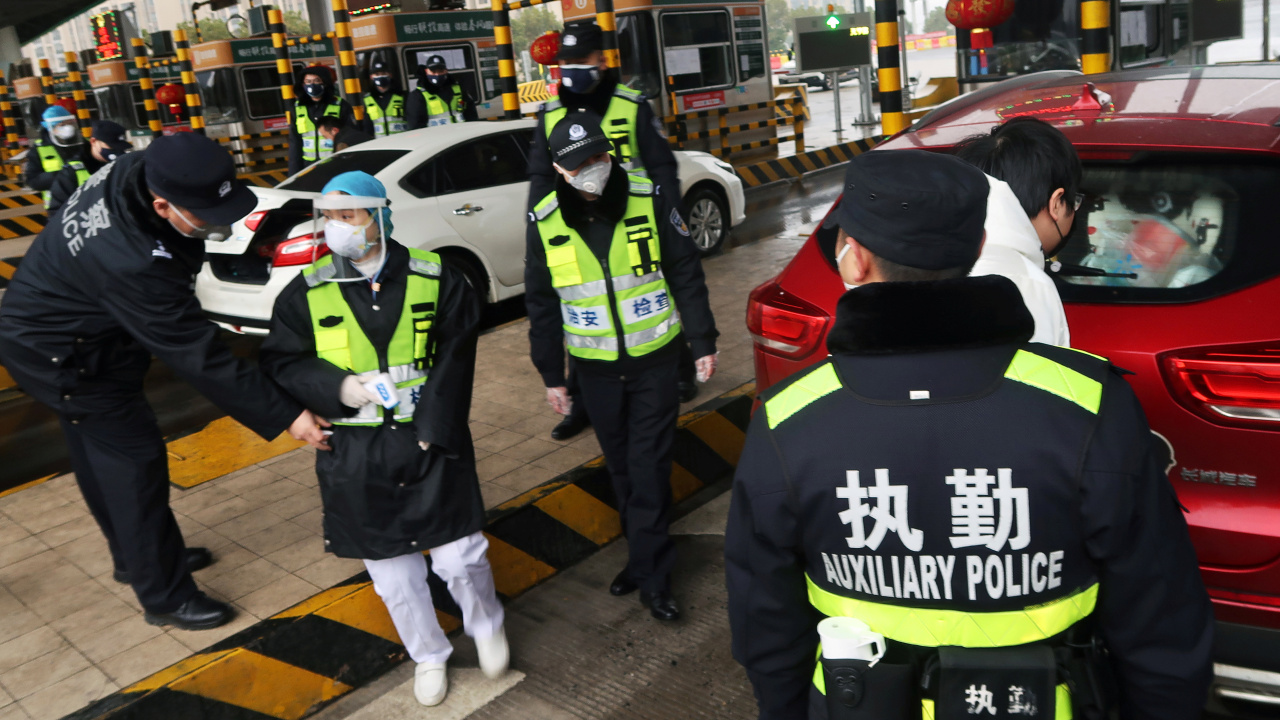 Police officers wearing masks check the boot of a car for smuggled wild animals following the outbreak of a new coronavirus, at an expressway toll station on the eve of the Chinese Lunar New Year celebrations, in Xianning, a city bordering Wuhan to the north, Hubei province, China January 24, 2020. REUTERS/Martin Pollard (China)（Photo provided by : ロイター/アフロ）

The blockade of Wuhan started at 10 a.m. on January 23, while notice of such was given at 2:05 a.m., the same day. In the meantime, hundreds of thousands of Wuhan citizens managed to escape. Why was such a time allowance given to them? As I pursued for the answer, I found something absurd.

To be clear, here is the weibo’s article with local time.

I will also show you below the notice posted on the website of the Wuhan Municipal People’s Government. In either case, the content of the notice is as follows.

In order to fully execute the prevention of the pneumonia epidemic caused by the new coronavirus infection, to effectively cut off the transmission route of the virus, to decisively stop the spread, and to ensure the life safety and health of the public, we hereby give notice of the following:

As of 10 a.m. on January 23, 2020, all public transport throughout the city, including buses, subways, ferryboats, and long-distance passenger transport, will be temporarily suspended. Residents must not leave Wuhan unless they have special circumstances. Airports and train stations used to move out of Wuhan will be closed temporarily. Notification will be given when the situation returns to normal.

We seek the understanding and cooperation of all residents and travelers!

This notice was issued in the middle of the night on January 22, or 2:05 a.m. on January 23 to be precise, which means that there was a time allowance of about 8 hours between the execution of the blockade and the warning of the blockade.

As if to prove it, Xinhua Net, the electronic edition of the government press agency, Xinhua News Agency also issued a notice at 03:15:55 a.m. of January 23. This also showed a notice posted on a town bulletin board. Since this is not weibo, it shows the exact time when the notice was released locally (the time of reprinting).

What is implied by the time difference of 8 hours between the notice and the execution?

It would have been ridiculous if people did not run away from Wuhan with knowledge of such a notice. Those who have financial power and a destination to escape to are bound to escape before the city is blocked off. Moreover, the Chinese New Year was just around the corner. The Chinese government said in advance that a mass migration of 3 billion people would start. In fact, the Chinese Internet was flooded by comments that hundreds of thousands of Wuhan citizens escaped from Wuhan during this period. While those comments were deleted one after another, many Chinese media outlets outside Mainland China still have many posts and articles saying that hundreds of thousands of Wuhan citizens escaped in 8 hours.

* Find the reasons for themissing 8 hours!

Why did the City of Wuhan bother to give notice as if to say “Now it’s time to escape”? If they really wanted to prevent the infection from spreading, this should not have be done.

I was once subjected to a food blockade by the Eighth Route Army led by the Chinese Communist Party in Changchun from 1947 to 1948. Far from announcing the blockade in advance, the blockade gradually approached us unnoticed. Before I knew it, the whole of Changchun was surrounded by barbed wire so that citizens were not allowed to leave Changchun. A faction of the Chinese Nationalist Party (the Yunnan 60th army, which was discriminated against by the regular army) in Changchun defected to the Communist Party’s army and took control of Changchun in October 1948. Until then, as many as hundreds of thousands of ordinary Chinese people starved to death.

For me, who has spent all my life fighting over the experience of the Changchun food blockade and the Chinese government’s cover-up of the facts, this missing 8-hour period is an inexplicable measure.

Recently, I have been tracking the “Why?” and the “What happened?” with little sleep.

In addition, as I wrote in my column “Why did it take Xi Jinping so long to issue his instructions regarding the seriousness of the novel coronavirus?” dated January 24, if there was to be a blockade at the Wuhan city level, there must have been a decision by the central government or the State Council. This is why the Xinhua News Agency’s notice was posted online almost at the same time as the Wuhan municipal government’s notice. What is more, it was in the middle of the night!

There is also information that clearly states the legal basis for the State Council’s decision on the blockade assuming various cases.

I once thought it was because of the helpless folly of the Wuhan municipal government, about which I wrote in the column dated January 24, but I did not encounter a causal relationship that persuaded me as I pursued the reasons why the Wuhan municipal government was so stupid, and instead I concentrated on the facts of why the Xinhua Net issued the notice of the blockade in the middle of the night.

Then, what struck me was the relationship with the WHO (World Health Organization).

* The notice matched the timing of the WHO Emergency Committee meeting!

The WHO Emergency Committee was scheduled to meet in Geneva, Switzerland, at around 8 p.m. on January 22 Japan time to discuss whether the current coronavirus pneumonia outbreak and epidemic corresponded to an emergency situation.

For this reason, Xi Jinping held telephone talks with French President Macron, German Chancellor Merkel, and others on January 22, and emphasized measures against the current new pneumonia “Since the outbreak of the disease, China has carefully taken preventive and control measures and promptly provided information to WHO and other organizations” and that China “will take measures in cooperation with the international community.”

This means that China asked influential countries “Please do not declare an emergency for the current outbreak and epidemic of the new coronavirus pneumonia.”

The meeting in Switzerland would start at around 8 p.m. Japan time.

The time difference between Wuhan and Tokyo is 1 hour.

This means that the meeting would start at 7 p.m. on January 22 Wuhan time.

It was too late to announce the blockade in the middle of the night on January 22, but as was the case with the phone call between French President Macron and President Xi Jinping, China was probably in close contact with the WHO. Therefore, the information that the order for blockade would be issued soon must have been provided to the WHO Secretariat. The meeting seems to have dragged on, which implies the information was probably just in time.

As a result, Xi Jinping succeeded in preventing WHO from declaring an emergency.

On January 23 Japan time, WHO Director-General Tedros Adhanom announced at a press conference that they deferred the decision to declare an emergency. In other words, Xi Jinping succeeded in putting off the declaration of an emergency. This means that the signal “There is no need to declare an emergency because we have ordered a blockade and have taken measures to prevent the spread of the new pneumonia” worked effectively.

If an emergency were declared against China now, China would suffer a devastating blow in the US-China struggle for hegemony. It is inferred that Xi Jinping desperately played his trump card in order to avoid it.

* Relationship between Xi Jinping and WHO Director-General

It was WHO Director-General Tedros Adhanom whom Xi used as his last resort.

It goes without saying that China is now Ethiopia’s largest investor.

Mr. Tedros Adhanom, who became the Director-General of WHO in July 2017, was previously the foreign minister of Ethiopia. He has been in contact with Xi Jinping for a long time. They are incalculably close to each other. The final decision on the declaration of an emergency is in the hands of the WHO Director-General.

It can be concluded that the missing 8 hours were for the purpose of avoiding a WHO declaration of an emergency by a hair’s breadth. It would have been too late to announce the blockade at the same time as or later than the execution of the order at 10 a.m. on January 23.

* Xi Jinping is causing a pandemic

However, the negative impact of this trick is beginning to have devastating consequences.

The incubation period of the new coronavirus pneumonia is reportedly about 10 days, ranging from 1 to 14 days. Assuming it is 10 days, there are estimated to be hundreds of thousands of Wuhan refugees scattered across China and elsewhere in the world. This means that the virus is spreading at the same time. Given human-to-human infection and secondary infection, there is a risk that patients will increase explosively in up to 14 days from January 23 to February 5. We are on the verge of a pandemic.

Today (January 26), the Chinese government authorities said that the virus may be becoming more contagious. In addition to that, the rapid expansion is also related to the escape of Wuhan citizens. China created the 8 hours vacuum in order to avoid WHO’s declaration of an emergency, and thus instantly dispersed those hundreds of thousands of Wuhan citizens, who are most likely to have the virus, into various locations. Beijing has just announced that a large number of new coronaviruses were detected in the seafood market from which they originated.

If so, it is Chinese President Xi Jinping who is the culprit behind the pandemic.

In my column titled “Why did it take Xi Jinping so long to issue his instructions regarding the seriousness of the novel coronavirus?” on January 24, I wrote that the main culprit was local governments’ bureaucratic folly that only pays attention to Beijing. This time, the main cause is the tremendous protective reaction of Beijing to it.

Which is important, to save the lives of the Chinese people or to save face in front of the world?

Which is important, to focus on responsibility to all mankind or to temporarily avoid punishment from the WHO?

I believe it is much more important not to cause a pandemic, even if being subject to the declaration of an emergency. The fact that China cannot choose to do so indicates the country’s deceptive structure. Along with the danger of local governments, this is where China’s vulnerability lurks, potentially resulting in a catastrophe.

The government of Prime Minister Shinzo Abe pledged to share responsibility with the president of such a country and is trying to invite him to Japan as a state guest. This is to legitimize the Xi Jinping’s administration by distributing images of him shaking hands with the Emperor around the world.

The Abe Cabinet should have an eye to see the truth about how the invitation of Xi Jinping as a state guest even under these circumstances will bring a dreadful future to Japan and the world.

What are the opposition parties doing, on the other hand? I hope the legislature will hold debates from a broad point of view on how Xi Jinping’s visit to Japan as a state guest will bring about a dangerous future.

(This essay is a copy from Yahoo News.)