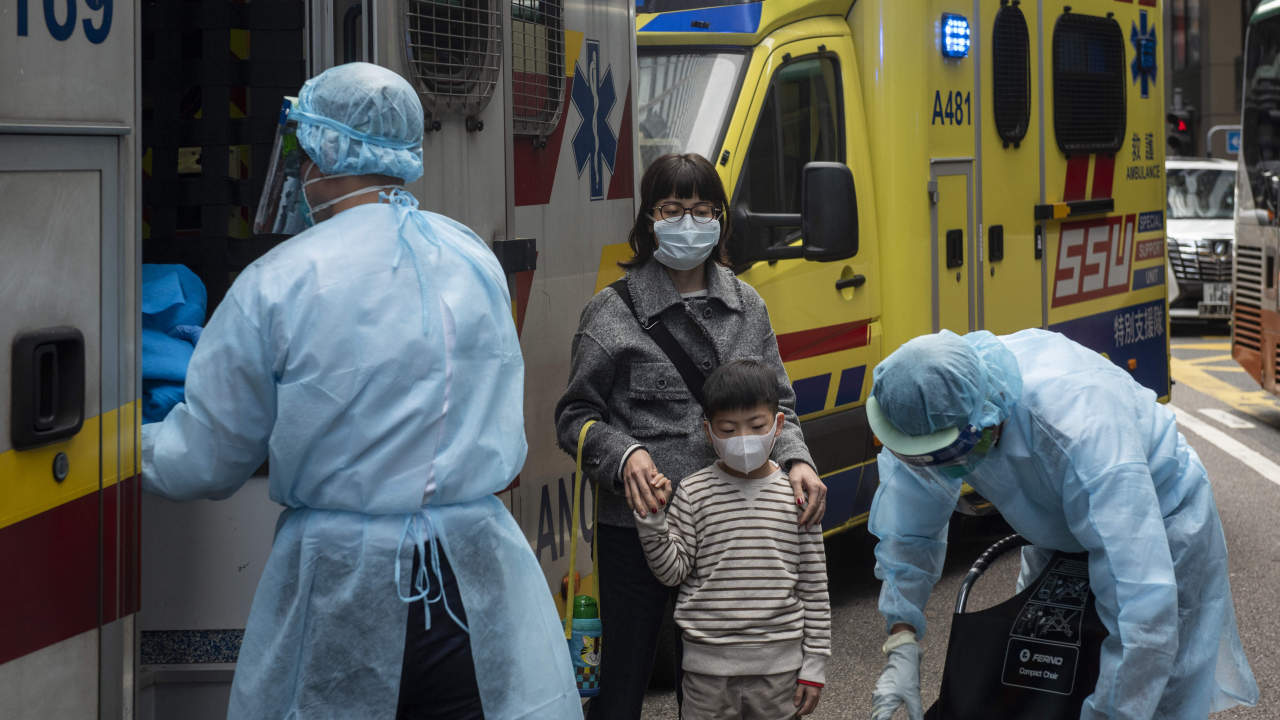 January 23, 2020, Hong Kong, China: Health care members make first aid to people as they cover their faces with sanitary masks after the first cases of coronavirus have been confirmed in Hong Kong in Hong Kong, .China has implemented a public transportation and airport lock down into different cities to slow down the spread of the Wuhan coronavirus.（Photo provided by：ZUMA Press/アフロ）

The first case of pneumonia caused by a novel strain of coronavirus was confirmed on December 8 last year. On January 20, Xi Jinping issued instructions stressing the seriousness of the virus for the first time. Why the delay? Consumption of wild animals and the regional lianghui have shed light on some surprising facts.

The trends in the number and locations of new cases are being reported by many media outlets by the minute, so I will narrow the focus of this article directly onto the cover-up, namely “who did it” and “for what reasons.”

The first point we need focus on is the fact that the source of the virus is a seafood market (Huanan Seafood Wholesale Market) where wild animals are also sold.

At this stage, the animals that are being focused on as possible sources of the infection include bamboo rats and snakes, but this seafood market sells more than 100 species of wild animals. On January 22, The Beijing News,a local Beijing newspaper, published the menu and price list.

The photograph below shows that menu and price list. 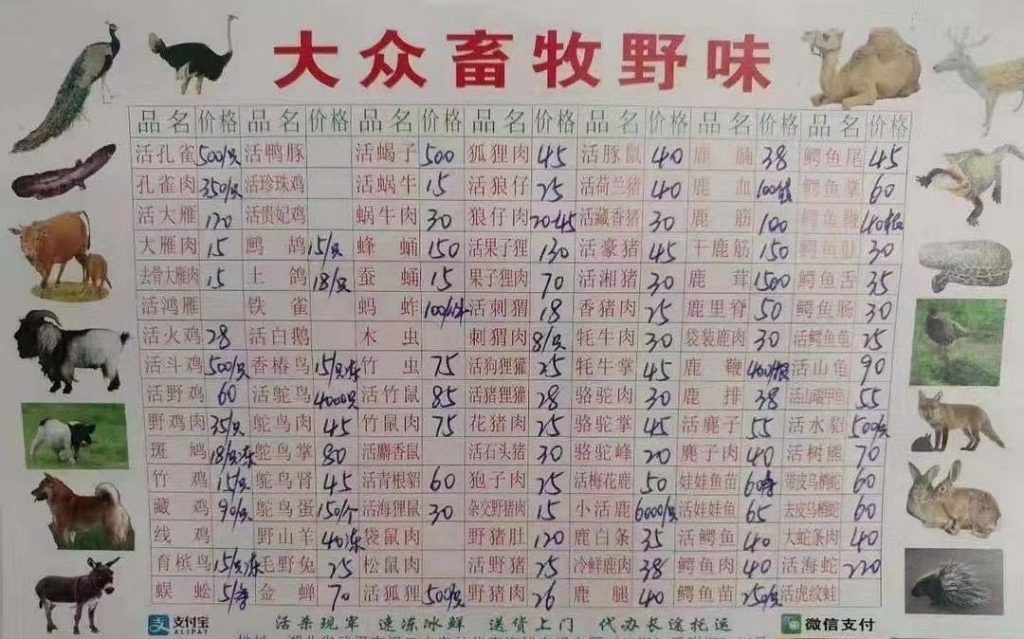 According to this menu, as well as bamboo rats and snakes, there appears to be other wild animals regularly available as “food,” including badgers, civets, foxes, koalas, wild rabbits, peacocks, wild geese, scorpions, crocodiles…the list goes on.

What is more, the meat from these animals are not necessarily sold cooked. Sometimes it is sold raw, or the animal is slaughtered before the customer’s eyes. Some vendors also offer home-delivery services of frozen meat.

The problem is, whether or not the vendors have permission to sell these kinds of wild animals for human consumption.

China actually has a number of laws controlling the capture and consumption of wild animals. Various restrictions have been attempted since the SARS outbreak in 2003 in particular.

For example, there are various restrictions in respect of the Wild Animal Protection Act (Articles 29 and 30) and the Land-dwelling Wild Animals Protection Ordinance, and even in the Food Safety Act and the Criminal Code (Article 341).

Some of the wild animals on this menu may be legal, but if 100 species are available, it is highly likely that there are also some that are illegal. In terms of how they were obtained, while the rearing of some wild animals is permitted, there are other wild animals whose very capture is prohibited, and there is only a very limited number of wild animals that are permitted for human consumption.

The very fact that these kinds of wild animals are being eaten may be illegal or even criminal.

Under these circumstances, it is conceivable that the Wuhan government authorities attempted to prevent the outbreak of pneumonia caused by this novel coronavirus from being leaked to outside parties. We can assume that, in particular, what they most feared was the news reaching Beijing. The reason for this is that the “National Lianghui,” which I will explain about below, was due to be held very soon.

◆ Local government cover-up No. 2: The “Lianghui”

In China, the plenary session of the National People’s Congress (NPC), which is close to Japan’s National Diet in terms of its function, will begin on March 5. At the same time, (usually two days earlier, for the same duration), the Chinese People’s Political Consultative Conference (CPPCC) will also take place. These two events are collectively known as the National Lianghui, literally “two meetings.”  Similar lianghui are held at all levels of local and regional government before the national meetings. These are usually finished before the Lunar New Year.

Wuhan is located in Hubei Province. The lianghui at the provincial level was scheduled for January 12 to 17 this year. The outcomes of deliberations at the Hubei Province lianghui will be reported on March 6 and beyond in the individual province-level sessions at the Great Hall of the People in Beijing, where President Xi Jinping will also be in attendance.

This “sacred” Hubei Province lianghui could not be allowed to be defiled in any way.

We can conclude, therefore, that the Wuhan government plotted to keep the facts hidden both from the Hubei provincial government and the central government in Beijing.

There is an image doing the rounds of the Chinese internet that indicates this.

That image is shown below.

Pay particular attention to the section circled in red. It states that the Hubei Province lianghui opened on the 12th and “closed victoriously” on the 17th, but what’s this? It says, “No new patients infected via close contact” only for the days between those two dates!

In other words, they somehow managed to slip through this period without incident.

As proof, when we come to January 19, it is reported that the number of patients has suddenly, “more than tripled.”

That is because all of the patients that became symptomatic in those six days were announced in one fell swoop on the 19th.

People who do not know the real situation behind the scenes have reported that the contagion suddenly spread from the 19th, but this is actually a complete, bald-faced lie!

This is the true reason for the actual state of outbreak, the refusal to report to Beijing.

◆ Why did the information reach the central government?

So, how was it that Beijing came to know about it? The first stage concerned developments in Shanghai.

Take a look at this information.

On December 26, 2019, as part of routine sample collections, a scientific testing project at the Shanghai Public Health Clinical Center obtained samples of febrile patients from its project partners, Wuhan Central Hospital and the Wuhan Center for Disease Prevention and Control, and conducted a detailed test on them. As a result, the Center in Shanghai determined on January 5, 2020, that the pathogen was a “new strain of coronavirus” that had never been seen before.

Even so, the Hubei provincial government still held the lianghui, sending an implicit message to Beijing to the effect that, ‘Yes, we have had some cases, but the problem has been resolved, so everything is fine.” However, as one would expect, Beijing probably had their suspicions. In the second stage, on January 19, a “national high-level expert group,” led by Zhong Nanshan, an Academician (academic title above “Dr.”) of the Chinese Academy of Engineering, a Chinese think tank, came to Wuhan to investigate the actual situation. Having grasped the situation, the group apparently returned to Beijing the very same day and reported to accordingly.

This is how Xi Jinping learned of the situation and finally came to announce his “important instructions” on the 20th. After this, China rapidly descended into panic.

On January 21, the Dongxihu District Market Supervision and Management Bureau of Wuhan City issued a notification to market operators, but it was too late. I would ask you to take note of point “2” on that page. You should be able to make out the characters for “Food Safety Act” and “Wild Animals Protection Ordinance.” Text in that section such as “slaughter of live animals” has me shuddering in horror.

Finally, I will add one more story that is even more horrifying.

Even though the Hubei Province lianghui was being held until January 17, that blank interval between January 5 and January 19 had me wondering. I looked into it in more detail, and I learned that, on January 21, the Hubei Province Lunar New Year Show was held in Wuhan. Apparently, all of the top-level officials of the Hubei Province and Wuhan City governments attended. What’s more, apparently, some of the artists performing at the show were displaying symptoms suspected of being pneumonia caused by the novel coronavirus. There has been a blaze of criticism on the Chinese internet against the organizers for forcing those artists to carry on with their very vigorous performances. With so many people gathered at a theater in Wuhan, the infection was bound to spread.

Despite this, we can assume that they pressed ahead with the event because, and I repeat, they wanted to show that, ‘We know it is pneumonia related to a novel coronavirus, but the pneumonia in Wuhan has been resolved and is under control, so there is no problem.’ That is why the leadership classes of Hubei Province and Wuhan City all attended the concert to show a united front.

However, Beijing, no longer fooled,  issued an order to Wuhan to lock the city down on January 23. Wuhan residents would no longer be able to leave the city for any reason. Apparently, there were residents who saw this coming and escaped to Shanghai and other places immediately before the lockdown order was handed down. They could number in the thousands or even tens of thousands.

What needs to be noted here is that it is only the central government that can issue a lockdown order.

No matter how underhanded the Wuhan City and Hubei provincial governments were in attempting to cover up the facts, their fate was evident.

Even so, how terrifying and how foolish is their thinking that, for the sake of protecting their own standing with Beijing, they have no qualms about involving the entire world in such terror. China’s system of one-party rule and its pyramid-shaped chain of command may seem to be absolute from people looking in from outside, but these events are a testament to just how flimsy the cooperation between the central government and the regions really is. With a population of 1.4 billion, there are bound to be some lapses in command, but I feel as though we are witnessing the root of China’s ills.

This may actually be another example of China’s fragility.

(This article was reproduced from Yahoo News.)