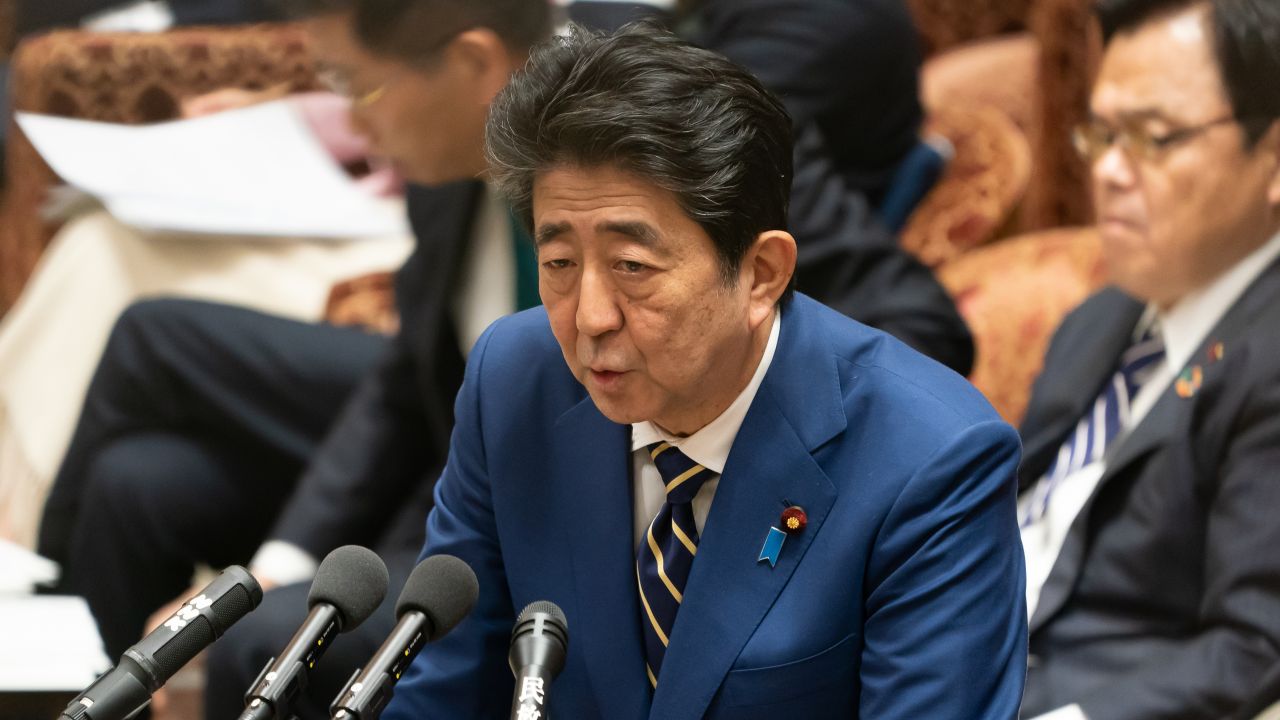 Xi Jinping is doing everything he can to play down the impact of the new coronavirus. Nowhere has his efforts paid off more than with the Abe Cabinet, which seeks to make the invitation of Xi Jinping as a state guest to Japan successful. Japan has refrained from fully restricting the entry of Chinese citizens into the country. As a result, Japan is now turning into a second Wuhan.

On January 31, Prime Minister Shinzo Abe held a meeting of the Novel Coronavirus Response Headquarters in order to prevent the spread of the coronavirus in Japan. In the meeting, Mr. Abe noted, “Any responses constrained by past practices can never respond to this unprecedented crisis.” However, at the time, travel restrictions on travelers from China covered only visitors from Hubei Province. No travel restrictions were imposed on travelers from other regions of China.

However, in response to the spread of the virus in Japan, Prime Minister Abe finally decided on February 12 to add foreign nationals with any history of staying in Zhejiang Province to the list of those denied entry to Japan. The government started implementing this policy on February 13. In the meeting, Mr. Abe noted, “it is vital to put in place more comprehensive and flexible border control measures so as to prevent the tide of infections from entering Japan.” However, these measures were too late.

This is because when Wuhan was placed on lockdown on January 23, five million Wuhan residents had already fled the city since the coronavirus outbreak, and people who could be infected were already spread out throughout China.

The Chinese government has been reporting the number of new patients and deaths by province, municipality and autonomous region, moment by moment. New data for each locality is updated at the rate of once every several minutes. Therefore, although things may be different by the time this column is published, the data at this time (17:47 on February 19) can be used to list the number of cumulative patients in each province, from large to small in descending order, as follows:

On January 30, the World Health Organization (WHO) declared a Public Health Emergency of International Concern (PHEIC). Despite this declaration, WHO Director-General Dr. Tedros Adhanom Ghebreyesus, a close ally of Xi Jinping, excluded China from “a ban on travel and trade with the affected country,” which should ordinarily be imposed when a PHEIC is declared. Japan seems to have aligned its policy with the WHO. However, countries such as the U.S. have barred entry to all travelers from China other than its own citizens. This approach has certainly stopped the spread of the disease within the U.S.

In contrast, up to February 12, Japan had only imposed travel restrictions on Hubei Province, which means travelers from elsewhere in China had been free to enter Japan.

The Chinese government sharply criticized the U.S. response, characterizing it as “certainly not a gesture of goodwill.” Meanwhile, China has heaped praise on Japan, describing it as a “very friendly nation.”

For example, on February 7, Toshihiro Nikai, Secretary-General of the Liberal Democratic Party, together with Tetsuo Saito, Secretary General of Komeito, visited the Chinese embassy in Tokyo. Not only did they pledge support (financial and other assistance) for efforts to address the coronavirus in China, Mr. Nikai and Mr. Saito also sang the praises of Xi Jinping for leading a strong fight against the coronavirus in China, as WHO Director-General Tedros Adhanom Ghebreyesus similarly lauded him. For this reason, China Central Television (CCTV) reported this news story in China repeatedly, day after day. Notably, the news media focused on a particular scene where Secretary-General Nikai told Chinese Ambassador to Japan Kong Xuanyou that “China is Japan’s neighbor, so it is like something serious has happened in your neighbor’s house.”

In a dialogue with the author, journalist Soichiro Tahara said that he had strongly recommended that Mr. Nikai develop a friendly relationship between Japan and China through measures including inviting Xi Jinping to visit Japan as a state guest (included in “Gekitotsu! Endo Vs. Tahara Nicchu to Shu Kinpei Kokuhin” (Homare Endo Versus Soichiro Tahara: Debate on Japan-China Relations and Inviting Xi Jinping as a State Guest to Japan). In these ways, China is very adroit at nurturing pro-China supporters.

Amid a series of headlines such as Mr. Nikai heaping praise on China, the Chinese government arranged for State Councilor and Foreign Minister Wang Yi to meet with Japanese Foreign Minister Toshimitsu Motegi at the 56th Munich Security Conference held in Munich, Germany. The Chinese government had Mr. Yi confirm with Mr. Motegi that Xi Jinping’s visit to Japan in April as a state guest “will take place as planned.”

As I wrote in my February 16 column, “Were Xi Jinping’s ‘Instructions on January 7 for Dealing with the Coronavirus Outbreak’ a Falsehood?,” February 15 was the very same day that Xi Jinping posted remarks to the effect that “I have urged caution against the new coronavirus since January 7,” on Qiushi Journal, an organ of the Central Committee of the Communist Party of China. The people’s discontent and anger were reaching a boiling point in China. To send a convincing message to the people, Mr. Xi falsely stated that “I have been addressing the situation properly.” Overseas, Japan, a member of the G7, said, “China has made great efforts to control the spread of the virus, which Japan highly appreciates.” This statement was prepared as positive news material that could be widely advertised to the Chinese people.

However, in China, the news media has not reported that Xi Jinping will visit Japan as a state guest in April as planned. Even without these plans, Xi Jinping had taken a foreign trip to Myanmar and participated in Chinese Lunar New Year festivities in Yunnan while he issued important instructions on the new coronavirus on January 20. That is why Mr. Xi cannot possibly announce that he will go on another foreign trip now that the number of coronavirus patients has surpassed 70,000.

However, Mr. Xi will have an audience with the Emperor of Japan during his state visit. Mr. Xi is trying to set things up so that he obtains a get-out-of-jail-free card after his state visit to Japan. His audience with the Emperor will effectively grant him amnesty for the role he has played as the main culprit behind the spread of the new coronavirus around the world.

Why must such a serious offender be invited as a state guest to Japan? Prime Minister Abe owes the Japanese people an explanation for this visit. After all, it is difficult to deny that Mr. Abe’s appeasement of Xi Jinping, in his efforts to make a success of the invitation of Mr. Xi to visit Japan as a state guest, has caused the spread of the coronavirus within Japan.

Does the Constitution of Japan restrict state of emergency?

In this climate, some people have pointed out that Japan does not have the power to deny entry to all travelers from China, even temporarily, as the U.S. has done. They claim that this is because the present Constitution of Japan does not contain an “state of emergency clause.”

However, the Constitution of Japan basically applies to people who have Japanese nationality. The Japanese government could run into problems if it “prohibited Japanese citizens from departing the country,” but the government should be able to implement a temporary “ban on foreign nationals from entering the country” without violating the Constitution. The Japanese government could also temporarily deny entry to travelers from China through a combination of existing laws such as the Immigration Control and Refugee Recognition Act, Quarantine Act, and Act on the Prevention of Infectious Diseases and Medical Care for Patients with Infectious Diseases. If necessary, it would not be impossible for the government to enact emergency measures into law.

In the Seiron column of the February 19 edition of the Sankei Shimbun, there was an opinion piece titled “Discussing the New Coronavirus at the Level of Constitutional Law.” It was written by Osamu Nishi, Professor Emeritus at Komazawa University. In the opinion piece, Professor Nishi highlighted the following points (summarized below):

This interpretation is in fact true, and I believe it is correct. However, I also believe that the Japanese legal system has been pivoting toward the spirit of common law, with civil trials and other proceedings putting emphasis on “precedent,” even under the Constitution of Japan, which is based on the framework of continental law. For example, the Financial Instruments and Exchange Act of Japan has shifted to a common law basis under the direction of the U.S.

The Hong Kong problem that raged last year had a lot to do with the question of whether the legal system should be based on common law. I had an extensive one-on-one debate with Mr. Soichiro Tahara, discussed earlier, on matters related to common law (Hong Kong, which was a former British colony) and civil law (Macau, which was a former Portuguese colony). (Roughly speaking, common law allows the government to take flexible action based on precedent, even though actions are not stipulated in law, whereas civil law prevents the government from taking action unless the action is clearly stipulated in law as a clause.)

Through the establishment of the Financial Instruments and Exchange Act, Japan has shifted course to incorporating aspects of a common law-based financial legal system. This trend is discussed in detail by Takayuki Fujikura in a paper titled “Financial System and Jurisprudence— A Study Beginning with Legal Origins,” which was published in Social Innovation Research Volume 9, Issue 2 (October 2014).

There is no reason that what has already been accomplished in the financial sector cannot be accomplished in areas with a high level of urgency such as emergency measures.

In any case, if Prime Minister Abe decides to deal with the situation seriously, he should find that he has a variety of options at his disposal. He should not use the Constitution as an excuse to prioritize Xi Jinping’s visit to Japan as a state guest at the expense of the lives of the Japanese people.