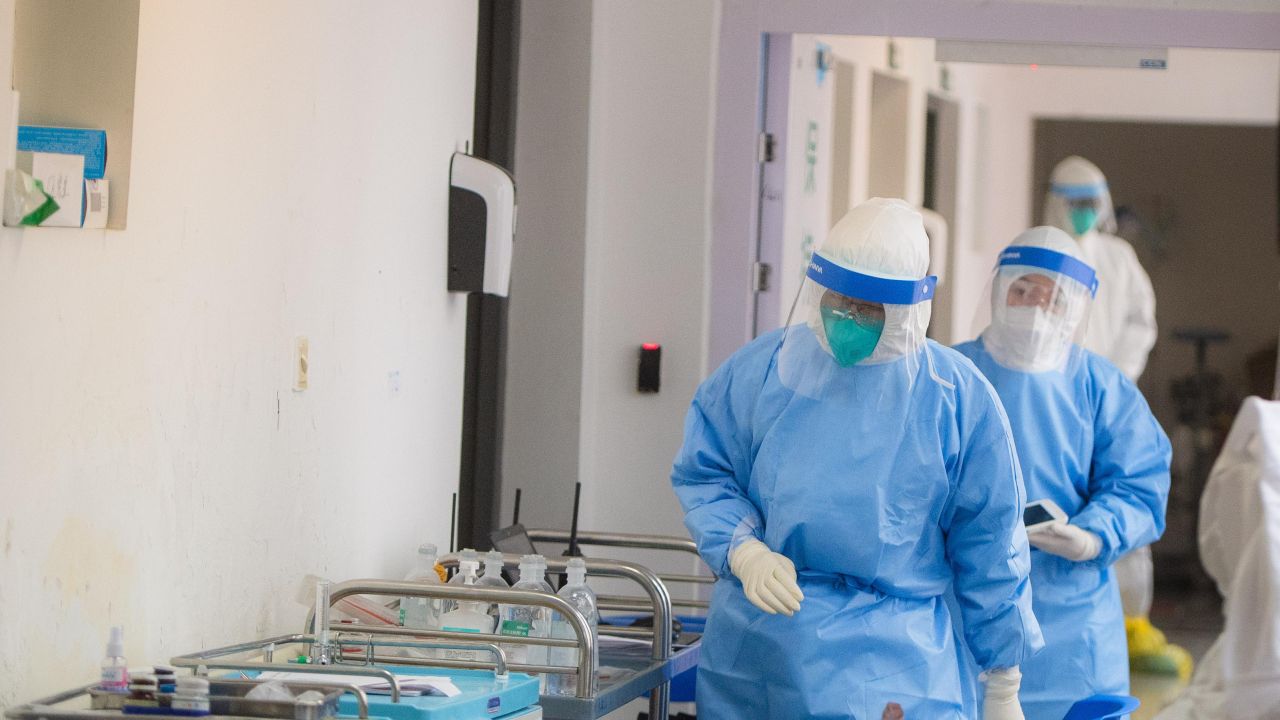 It turned out that the Red Cross Society of Wuhan had not passed the supplies and funds gathered from all over the country to the Wuhan Union Hospital, a Wuhan-based designated hospital that accepted the largest number of patients of a new coronavirus. Social media erupted with angry posts on the monetarily corrupt relationship in the background, which forced Xi Jinping to hold an emergency meeting.

Japanese news media inaccurately reported that the “Xi administration has admitted a mistake in handling the situation, which delayed initial response to a new coronavirus outbreak.”

◆What has the Red Cross Society of Wuhan done?

The Red Cross Society of Wuhan acts as the center for masks and other medical supplies and donations gathered from all over the country. However, the organization has delivered only 3,000 masks to Wuhan Union Hospital, where roughly 8,000 doctors and nursing staff work, whereas it delivered as many as 36,000 masks to two small-sized private hospitals that are not designated as coronavirus treatment facilities. Social media was flooded with angry Chinese citizens who learned of this.

I will go over what happened.

Wuhan was sealed off on January 23rd, and several clinics in the city were designated as new coronavirus treatment facilities. The largest hospital among them is Wuhan Union Hospital (Union Hospital of Tongji Medical College of Huazhong University of Science and Technology). Wuhan Union Hospital has 700 beds and about 8,000 staff, including doctors and nursing staff, who work on emergency patient treatment.

From the 23rd through the 29th, the hospital and doctors personally complained on Wechat, Douban, Xuexi Qiangguo and other apps about the shortage of masks, medical protective clothing and other supplies, and asked for donations.

In fact, a massive amount of relief supplies have been offered from within and without China, including 56,228,000 masks and 738,000 sets of medical protective clothing by overseas Chinese citizens, most of which have been transported to Hubei Province, mainly Wuhan.

“How could the hospital be in short of medical supplies?” even the Weibo account of the People’s Daily Online, the news organ of Chinese Communist Party, reposted complaints made by Wuhan Union Hospital at 17:28 on January 30th. Click to read the original post. The message was dispatched at 12:29 on January 30th by Dr. Do, a neurology doctor at Wuhan Union Hospital, and deleted later. I reposted a backup for reference purposes. Dr. Do said, “3,000 sets of protective clothing, 5,000 95-type medical masks, 8,000 surgical masks, etc. are urgently needed. Wuhan Union Hospital has already run out of these supplies. We have no time to lose.”

In response to the unexpected development, the Red Cross Society of Hubei Province disclosed on January 30th in what way those relief supplies and funds were initially delivered following the new coronavirus outbreak.

To our surprise, the report said that designated Wuhan Union Hospital received only 3,000 masks and donations of 12,000 yuan (15.46 yen per yuan), whereas both Renai Hospital and Tianyou Hospital in the city preferentially received as many as 16,000 N95-type medical masks (later revised as 18,000 masks) and donations of 360,000 yuan. This means that 36,000 masks in total were only offered to the above two hospitals. Renai Hospital has no facilities for new coronavirus treatment, and is only known as a private hospital specialized in cosmetic surgery, gynecology, fertility treatment, and sexual disease treatment, etc. with only one tenth of the staff of Wuhan Union Hospital.

More importantly, the masks and funds donated to Wuhan Union Hospital were offered not by the Red Cross Society of Wuhan but by a woman named Han from Shaanxi Province as a favor.

On January 31st, the Red Cross Society of Wuhan announced the usage of relief supplies for the first time since the new coronavirus outbreak. Among 61 designated hospitals in Wuhan, 13 of them have received relief supplies as of January 30th, the report said.

According to the government’s official Xinhua News Agency, as of January 30th, the Red Cross Society of Wuhan received “donations of 608.08 million yuan, 9,316 boxes of masks, 74,522 sets of protective clothing, 80,456 medical goggles, and other medicines and medical equipment.”

Where have the money and supplies gone?

Wuhan Union Hospital officials revealed that the hospital is not included in the money and supplies distribution list prepared by the Red Cross Society of Wuhan.

The above-mentioned fact is mostly written in the Southern People’s Weekly (Nanfang renwu zhoukan), a relatively liberal (was much more liberal before the Xi administration) media outlet.

At 16:18 on February 1st, an audio message, which was delivered by one of the nursing staff of Wuhan Union Hospital through “Front FACE” of IFENG NEWS, was spread via weibo. Click to play a video of IFENG NEWS interview to the nurse. Several links are available, in case some are deleted.

The summary of what the nurse tried to complain about is described below:

Her audio message triggered an eruption of social media in mainland China.

◆What has caused the disruption?

Below is my personal guess, because even the chief nursing officer of the hospital seems to have no idea.

First, I repeat what I wrote in my article dated January 24th “Why did it take Xi Jinping so long to deal with the novel coronavirus?” as follows:

On January 19th, a “national high-level expert group,” led by Zhong Nanshan, an Academician (academic title above “Dr.”) of the Chinese Academy of Engineering, a Chinese think tank, came to Wuhan to investigate the actual situation. Having grasped the situation, the group apparently returned to Beijing the very same day and reported to accordingly. This is how Xi Jinping learned of the situation and finally came to announce his “important instructions” on the 20th.

The hospital visited by Zhong Nanshan was Wuhan Union Hospital, the largest hospital in Wuhan.

He learned that the new coronavirus can spread through person-to-person contact.

A seafood market in Wuhan City is a potential source of the patient’s infection. It is confirmed that none of those doctors and nursing staff had visited the site. So they had no direct contact with the wild animals in the market. It is extremely likely that all of them were infected by contacting the patient.

As medical professionals, they confirmed by themselves that the new coronavirus can be transmitted person-to-person.

In face of the vital evidence, Zhong Nanshan became convinced during the visit to Wuhan Union Hospital that the Wuhan pneumonia can be transmitted person-to-person. He immediately returned to Beijing to report the severity to Xi Jinping.

This led to Xi’s country-wide announcement of “important instructions,” which arose the antipathy of the Wuhan City government and the Hubei provincial government against Wuhan Union Hospital. This is not my personal guess. In fact, the Mayor of Wuhan City Zhou Xianwang himself admitted that 14 medical staff at Wuhan Union Hospital were infected, which was referred to by quite a few online sites from the mainland.

For example, this fact was referred to on January 21st by the Mayor of Wuhan City during an interview by CCTV, China’s official TV broadcaster, and also referred to by “Caixin” news site.

Most notably, in the interview with CCTV, the Mayor of Wuhan City criticized the neurosurgery doctor for having failed to confirm whether the patient was infected by a new coronavirus prior to admission. The Mayor insisted that the pandemic was caused by the carelessness of the neurosurgery doctor at Wuhan Union Hospital. Having failed to disguise the situation by trying to take an optimistic stance that the virus doesn’t spread person-to-person and the situation is under control, the Wuhan City government tried to shift the blame onto Wuhan Union Hospital.

But the CCTV reporter interrupted, asking him, “Then why did you hold a wan jia yan (literally, ten-thousand family banquet) on January 19th?” The Mayor could only respond with, “That’s an old common custom.”

What was happening at the same time was an incident that could shake the one-party rule.

In the face of the emergency, there was a monetary connection in the background, as always.

The report said that one of the major shareholders of Renai Hospital is a member of the Hubei Province Committee of the Chinese People’s Political Consultative Conference.

According to Beijing-based The Beijing News, the Red Cross Society of Hubei Province, Renai Hospital and Tianyou Hospital, which received 16,000 (later corrected as 18,000) masks, donated a significant amount of money to events in Hubei Province related to fertility treatment.

Moreover, the Chairman of the Red Cross Society of Hubei Province concurrently serves as the Lieutenant Governor of Hubei Province, a controlling party over the financial relationship. Through the Red Cross Society, the Hubei provincial government and the Wuhan City government were financially related to the two private hospitals, Renai Hospital and Tianyou Hospital, in the areas of cosmetic surgery, fertility treatment, and sexual disease treatment, etc. The organizations also have an interest in another private mask manufacturer, which makes the situation more complex.

In the face of the eruption of social media at the shocking facts of the Red Cross Society of Wuhan, the Beijing-based Red Cross Society of China visited Wuhan on February 1st, according to the People’s Daily Online, and its affiliate and an online version of Global Times Huanqiu.com, etc.

But the situation is irreparable by such an action.

On February 3rd, at a meeting held by General Secretary Xi Jinping, China Seven (seven members of the Standing Committee of the Politburo of the Communist Party of China) questioned the Central Government Group to Lead Initiatives for New Coronavirus Pneumonia, and discussed the current status.

This pneumonia poses a major challenge to our country’s governance system and capabilities. A number of weaknesses that were revealed in the countermeasures must be conquered. Learn lessons from experience, inspect further, and make improvements! * Notes (See the end of the article.)

The purpose of this emergency meeting was to discuss the scandal of the Red Cross Society of Wuhan.

But Japanese news media seemingly guessed that Xi tried to make up for the delayed initial reaction without knowing why, omitting examination of each fact.

I believe such an act may blind Japanese people, including their judgment as to whether to invite Xi Jinping as a state guest of Japan. This is my warning to the Japanese news media.

* Note: Xi Jinping also said, “Hubei Province and Wuhan are our highest priority,” stressing securing medical and protective supplies for these regions. Moreover, Xi urged the people to work hard to achieve economic and social development goals for this year, which has nothing to do with an apology statement. Reports by Japanese news media are uniformly biased. Wishful thinking that lacks objectivity may get in the way of truth. This will damage Japan’s national interests in the end.

(This article was reprinted from Yahoo! News, Personal.)