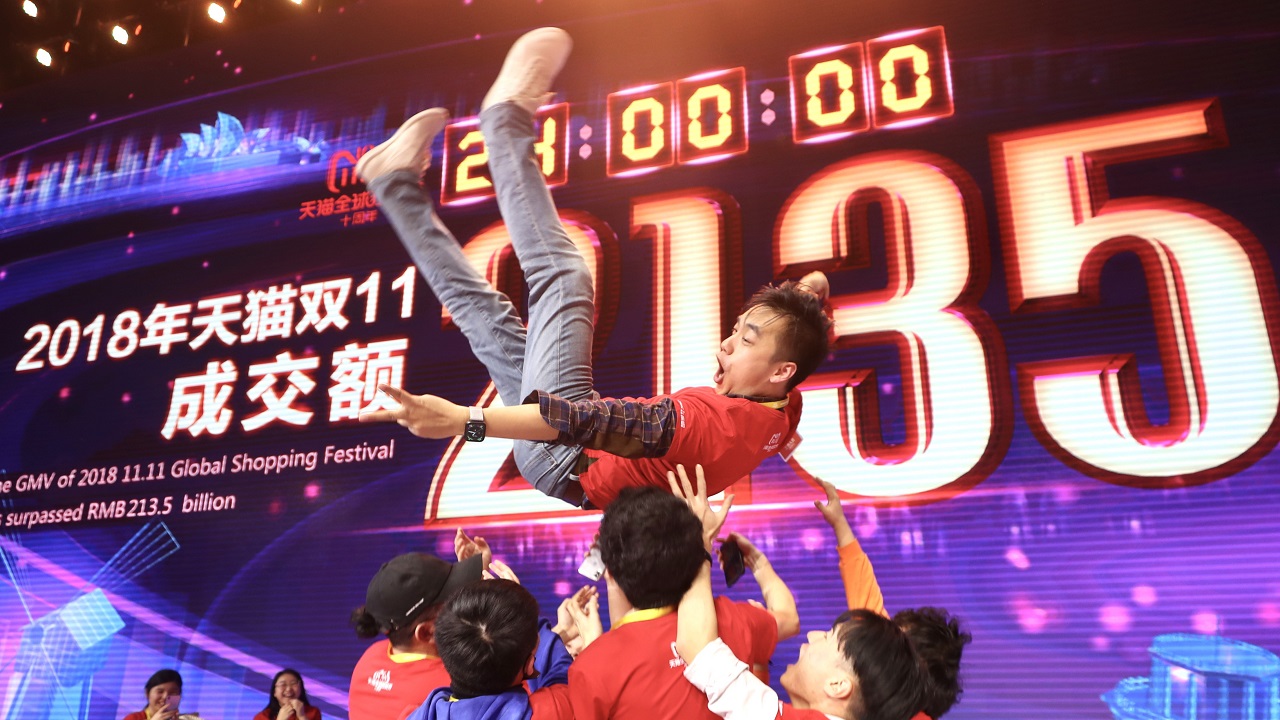 The National Bureau of Statistics of China announced on July 15 that the real growth rate in the April–June quarter of 2019 was 6.2%, the lowest level since records began in 1992. I asked a Chinese economist, a former government official, and young people how they viewed the rate.

* Consumption Growth Contributed 60.1% to the 6.2% Growth (National Bureau of Statistics of China)

On July 15, the National Bureau of Statistics of China commented on the growth rate for the April–June quarter of 2019 and others. According to the Bureau, the real GDP growth slowed to 6.2% year-on-year, weaker than the 6.4% growth for the January–March 2009 quarter right after the Lehman Shock in 2008. The figure has attracted much attention in Japan with comments that “the Chinese economy is in danger.”

However, Mao Shengyong, the spokesperson for the National Bureau of Statistics of China, said that China’s growth remains very steady, still within the growth target range of 6.0% to 6.5% which was announced by Premier Li Keqiang at the National People’s Congress in March this year. The spokesperson also said with confidence that none of the advanced large-scale economies have maintained growth at the 6 percent level, therefore, China can be viewed as the top runner.

Above all, the spokesperson stressed that consumption and retail sales contributed as much as 60.1% to the GDP growth of 6.2%, and China seems to be very confident about that.

According to the spokesperson Mao Shengyong, China’s confidence partly comes from the shift of its national light automobile emission standard to Grade 6 from Grade 5. While Grade 5 had been based on a European emission standard, Grade 6 is based on China’s own standard established at the end of 2016. Grade 6 requires stricter emission restriction by 40 to 50%, while unifying the restriction standards of gasoline cars and diesel cars. Various favorable treatments taken concurrently with the shift boosted the June consumption.

Another reason for the increase in consumption is the “6.18 mid-year promotion activities” that tend to stimulate the consumption appetite of e-commerce users in June.

”6.18 mid-year promotion activities” are a limited period of online discount sales that first took place on June 18, 2010 and are held by JD.COM which was established on June 18, 1998. The activities activated E-commerce in China, triggering other E-commerce sites to offer discounts on June 18. This resulted in the following monthly consumption growth rate, released by the National Bureau of Statistics of China: 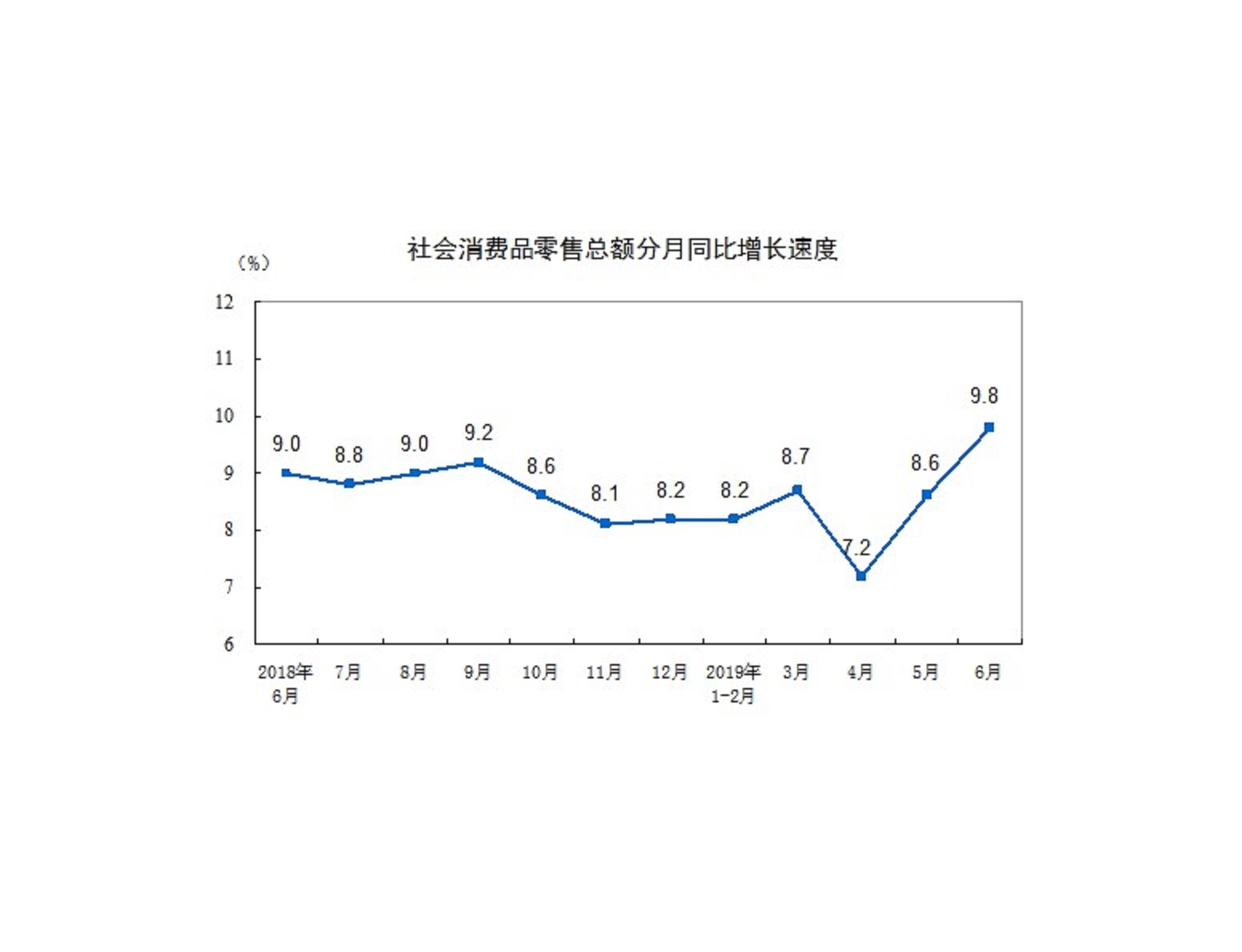 Japanese broadcasters including NHK reported that the recently announced growth rates “were contributed to very little by personal consumption, which might have been an unexpected event for the Chinese government.” However, their statement sounds different from reality.

In response to the recent announcement by the National Bureau of Statistics of China, Prof. Sun Qiming at Beijing University of Posts and Telecommunications, a researcher at the Global Research Institute on Chinese Issues (see the third person introduced on this page), stated as follows:

* Surprising Criticism of China from a former HighOfficial (Elder Statesman)

I also interviewed a former Chinese high official (so-called elder statesman), and he made a somewhat harsh comment.

The questions and answers are shown as Q (Endo) and A (Chinese ex-high-level official), as follows.

Q: What do you think of the recent GDP growth?

A: There are a lot of complicated things in the background. The U.S.–China trade friction is not the only thing that affects our economy.

Q: What do you mean?

A: China has an inherent problem.

Q: I know China is facing a lot of problems. What do you think is the main issue?

A: In other words, the gap between state-owned companies and private companies is too wide.

Q: Oh, just as I thought. I wonder when the situation (state-owned companies take the initiative and private enterprises follow) will improve.

Q: So it makes sense for President Trump to blame China.

A: Exactly. In some aspects, Trump’s criticism of China could help to improve China, contributing to the national interest.

Q: I am surprised. I would never have imagined I would hear such a comment from a person who worked for the Chinese government.

A: I have more to say. An IPO reform, for example. How many years have passed since the government decided to do it? It is no exaggeration to say that the Chinese stock market is a “heartbreak market.”

(IPO refers to Initial Public Offering, which is when an unlisted company goes public and lists its shares on a stock exchange where investors can trade the shares. In China, an IPO reform was proposed in 2013 but it has made little progress so far.)

Q: So, you think the 6.2% growth is definitely a hard-to-reach goal but problems are also linked to the internal structure of the Chinese economy, am I correct?

A: Exactly. 6.2% is not a bad rate. What matters is the components, or the quality of growth. If it remains untouched, China’s economy may go in the wrong direction in the end.

This is the critical view about China that I heard from an ex-government official, which was unexpected and meaningful.

* What Do Chinese Youths Think?

Finally, I asked some young people in Beijing what they think about the recent economy. I am referring to young workers in their 30’s.

The answers included “not so good,” “not good,” “incapable persons lose, competent persons survive,” and “I was laid off.”

Some even answered in a specific manner as follows:

I was impressed by their comments. They do reflect reality.