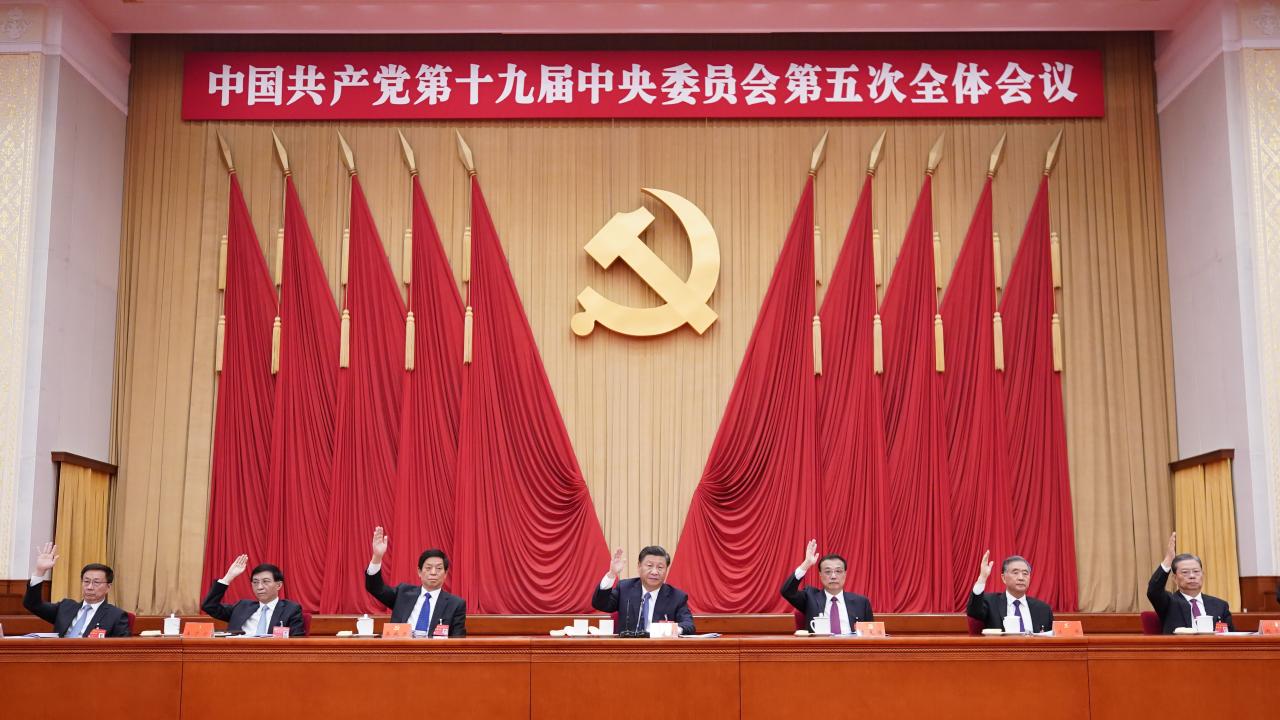 This article is an English translation of the article on December 7th.

The Communist Party of China (CPC) is China’s ruling party, providing the core of leadership for China’s unique system of socialism with Chinese characteristics. In accordance with the relevant provisions of the Constitution of the CPC, the CPC National Congress is normally held once every five years. The CPC National Congress is the most powerful political body within the CPC. What is commonly referred to as the “19th Congress” is shorthand for the “19th National Congress of the Communist Party of China.” The CPC National Congress selects members of the CPC Central Committee through an election. The CPC Central Committee ordinarily holds a plenary session once every year. Generally, the Central Committee holds a total of five or six plenary sessions in one period. These sessions will be hereafter referred to as the “First, Second, or Third, etc. Plenary Session.” At the First Plenary Session, the central leadership is determined. New members of the Political Bureau, the Secretariat, and the Central Military Commission are elected. At the Second Plenary Session, organizational preparations are made for replacing members of the State Council, the National People’s Congress, the National Committee of the Chinese People’s Political Consultative Conference (CPPCC National Committee), Supreme People’s Procuratorate and the Supreme People’s Court, along with selecting the leaders of the national government organs. The third to sixth plenary sessions generally study various priorities, specifically economic reforms, party construction, the five-year guidelines for social and economic development, and social conditions and party construction, etc., respectively. The Seventh Plenary Session does not constitute a “plenary session” as such, but normally serves as a forum to summarize experiences and prepare for the next National Congress.

The Fifth Plenary Session of the 19th CPC National Congress differed from previous fifth plenary sessions, and this difference carries a particularly crucial historical significance. Here is why. The Fifth Plenary Session adopted the lofty perspective of fully achieving the development of the CPC and the national project and embraced a strategic roadmap for advancing the effort to achieve China’s second centenary goal, in two stages. This second centenary goal was submitted to the 19th CPC National Congress (the 19th National Congress of the Communist Party of China). Therefore, not only did the Fifth Plenary Session formulate the 14th Five-Year Guideline (2021-2025) for China’s social and economic development, but it also formulated a unified medium- and long-term development guideline for 2035. (The first centenary period is defined as 1921-2021. The first centenary goal is to achieve a “moderately prosperous society in all respects,” by the 100th anniversary of the founding of the CPC. The second centenary period is defined as 1949-2049. The second centenary goal is to complete the development of China into a prosperous, strong, democratic, culturally advanced, harmonious, and beautiful modernized socialist nation by the 100th anniversary of the founding of the People’s Republic of China.) The 14th Five-Year Guideline is the foundation for realizing the long-term target for 2035, while the 2035 Medium- and Long-Term Development Guideline serves to drive forward the formulation, implementation and direction of the 14th Five-Year Guideline.

2. China’s Economic and Social Development to Enter a New Phase Beginning with the 14th Five-Year Guideline

The 14th Five-Year period marks the first such period when China will start advancing towards the second centenary goal, building on the momentum gained after achieving the first centenary goal through the successful development of a “moderately prosperous society in all respects.” From an international perspective, the world has experienced changes unseen in 100 years and has entered a phase of accelerated transformation. The global COVID-19 pandemic has exerted a widespread and far-reaching impact, and economic globalization is facing difficult circumstances. The blueprints for international economics, science and technology, culture, national security, politics and other areas have come under profound scrutiny, and the external environment for China’s development has become increasingly chaotic and complex. From a domestic perspective, the great rejuvenation of the Chinese people has entered a critical period, and there have been changes in the major contradictions in China’s society. The economy has shifted to a stage of high-quality development. China faces multi-faceted advantages and conditions and must deal with many difficulties and challenges. Although China faces an increasing number of uncertain and unstable factors and challenges from various risks, the country’s economic and social development continues to move forward, and China has boldly advanced to a new stage amid the crisis, driven by a new phase, new principles and a new blueprint. The Fifth Plenary Session of the 19th CPC National Congress conveyed to the world China’s strong belief in its ability to basically achieve its socialist modernization within the next 15 years. It also broadly conveyed to the international community China’s determination to maintain the principles of opening-up and development. In an environment shaped by an intensifying global economic downturn, and global political turmoil, China’s stability and development serves as a crucial ballast and driving force for the world’s peaceful development. Indeed, China’s development represents an opportunity, not a threat, to other nations around the world.

At the Fifth Plenary Session of the 18th CPC National Congress, for the first time ever five major principles were proposed: innovation, regional coordination, green development, international openness, and social equity. Based on these principles, the 14th Five-Year Guideline has embraced a new development philosophy, affirming China’s advancement from a stage of survival to a stage of development. The Guideline will closely adhere to the “happiness index system,” emphasize a people-centric approach, and propose benefits for all people. It will seek to realize an emphasis on the equivalence of “intra-generational equity” and “inter-generational equity.” The promotion of employment will be given priority in economic and social development. Simultaneous growth in both resident income and labor remuneration will be achieved. Growing income disparity will be reversed, and equalization of basic public services will be promoted. The benefits of economic development and its positive outcomes will be made accessible to all Chinese people.

The blueprint for economic development provides a comprehensive overview of the economy’s scale, structure, quality, format, methods and other attributes. Building a new blueprint means “Achieving a smooth domestic economic circulation and promoting an open dual circulation involving both domestic and foreign markets.” (Xi Jinping’s words). The new blueprint refers to the circulation of the overall blueprint for the national economy, signifying the overall circulation of the Chinese economy. It encompasses the notion of achieving a smooth domestic and foreign circulation, including the circulation of production, distribution, and demand, and import and exports, import and production and import and consumption. The core priority for the domestic circulation is to break through “pinch points” in the economy. Promoting the external circulation means that China will resolutely open up more of its economy to foreign markets. China will continuously expand the areas it will open up, and the scope and depth of the opening-up process, along with achieving a reduction in exports and a relative increase in imports. While steadily fulfilling its role as “the world’s factory” on the production front, China will earn its place as the “world’s marketplace” on the consumption front. By doing so, China will enlarge the domestic market and increase the attractive pull of the Chinese market, while promoting the mutual interaction of the domestic and foreign circulations.

The main goals for economic and social development in the 14th Five-Year Guideline include the following: Deliver new achievements through economic development, take new steps in reform and opening-up, make new improvements in the level of cultural advancement in society, and realize new progress on the construction of an ecological society, attain higher levels of civil welfare and make new improvements in national governance capabilities. China will further strengthen and expand the Chinese domestic market, modernize its industrial value chains, and build a sturdier agricultural foundation. It will further optimize its economic structure and dramatically improve its innovation capacity.

The long-term goals for 2035 are as follows: Dramatically enhance China’s economic power, science and technology capabilities, and comprehensive national power, and achieve important breakthroughs in core technologies that will be key to the future; Place China among the world’s leading innovation-driven countries, almost fully achieve new industrialization, adoption of information technology, urbanization, and modernization of agriculture, thereby completing a modernized economic system; almost fully achieve the modernization of the national governance system and governance capability, nearly completing the development of a nation, government, and society based on the rule of law; Complete the development of a strong country in terms of culture, education, human resources, and physical education, and a healthy China, develop expansive green production techniques and ways of life, steadily reduce carbon dioxide emissions after they peak out, thereby fundamentally improving the ecological environment and almost fully achieving the goal of building a beautiful China; Improve per capita GDP to the level of medium-tier developed countries and almost fully realize the modernization of national defense and the armed forces; and enhance the daily life of the Chinese people, fully develop people and achieve more notable and substantial progress in promoting common prosperity for everyone.

China will achieve high-quality development of its modern economy. China will establish an industrial structure where companies play a main role, markets guide the allocation of resources, and industry, academia and the public sector collaborate closely. China will promote efforts to put scientific research achievements to good use in the economy.

China will promote the modernization of agriculture and rural villages. By promoting its rural revitalization strategy, China will impart a sense of achievement, happiness and security to farmers.