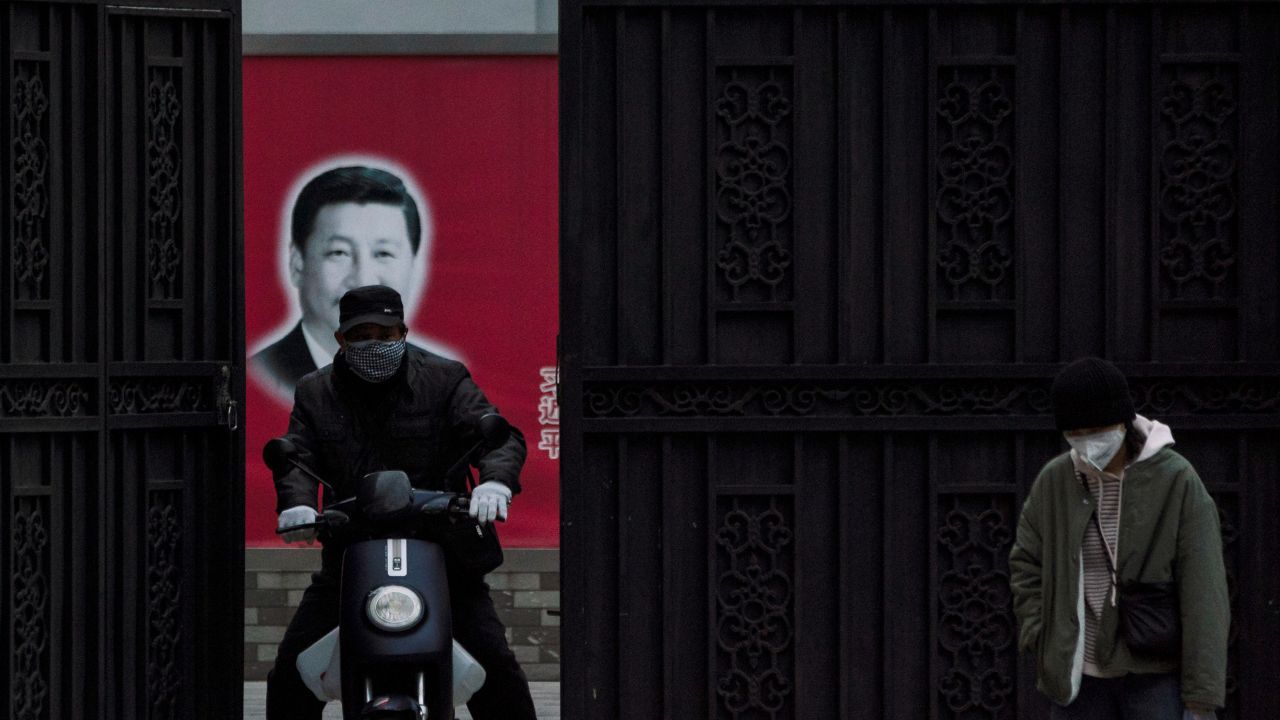 People wearing masks are seen in front of a portrait of Chinese President Xi Jinping on a street as the country is hit by an outbreak of the novel coronavirus, in Shanghai, China, February 10, 2020. (Photo provided by : ロイター/アフロ)

On February 10, Xi Jinping appeared on television for the third time since the coronavirus outbreak. Mr. Xi was compelled to do so by the death of Dr. Li Wenliang, and by the Chinese people’s fierce anger at the fact that “the suppression of free speech and the appeasement of Beijing by local apparatchiks” had triggered the new coronavirus pandemic.

Pictures of an unconvincing Xi Jinping as he tours Beijing

On the afternoon of February 10, President Xi Jinping made his first public appearance since the coronavirus outbreak.

In my article released at 13:57 on February 10, “Why Has Li Keqiang Been in the Public Spotlight More Than Xi Jinping Since the Coronavirus Outbreak?” I wrote that Xi Jinping has appeared on television only twice since the coronavirus outbreak. However, at 13:57 (Beijing Time: 12:57) when the article was released, Mr. Xi had certainly not yet appeared on television for a third time. After a considerable time had passed since my article was released, pictures of Mr. Xi appearing for the first time in public were shown to the public.

And how unconvincing he was, in that appearance.

Mr. Xi went through the formalities of donning a face mask, wearing a white gown and otherwise looking the part. However, his actions lacked any firm vigor or energy, nor did he convey any sense of urgency or crisis as the supreme leader of a country where the number of patients has been increasing by 3,000 a day. He raised his fist in a vow to fight the coronavirus, but there was no strength of any kind in the gesture.

No matter how many theatrics are put on display, the pictures of Mr. Xi happily waving at the people only reminds them of one thing: Mr. Xi had supposedly issued important instructions on the new coronavirus, but he was in fact celebrating the Chinese Lunar New Year on a tour of Yunnan.

In fact, the People’s Daily, the official newspaper of the Central Committee of the Communist Party of China, ran an article on Xi Jinping’s tour of Beijing on February 10. Right below that article, a headline for a separate article read “Go to Wuhan!”. For this reason, an image linking the two headlines of “Xi Jinping’s Beijing Tour” and “Go to Wuhan!” on the communication app of the People’s Daily was widely circulated on the Internet. This inadvertently gave expression to the people’s discontent in a skillful manner.

The people’s anger reaches a boiling point upon the death of Dr. Li Wenliang, the whistleblower summoned and admonished for warning about the coronavirus

I’ve written about this several times before. Dr. Li Wenliang, an ophthalmologist at Wuhan Central Hospital, warned his colleagues about a highly contagious infectious disease on December 30, 2019. He wrote that “A SARS-like virus is the cause of these pneumonia cases.” In response to this warning, the Wuhan police summoned Dr. Li on January 1, claiming that he had “spread rumors and subverted the public order.” Dr. Li was forced to sign a pledge in which he promised never to spread such rumors again. In the early hours of February 7, Dr. Li died from the new coronavirus, the very same disease he had tried to warn others about. Following his death, anger reached a boiling point on the Chinese Internet, with many netizens expressing an outpouring of grief. At the same time, they fiercely criticized the authorities’ suppression of free speech against Dr. Li.

Even Hu Xijin, the editor-in-chief of the Global Times, the sister news media outlet of the People’s Daily, wrote that “the Wuhan government should apologize to Dr. Li and the Hubei government should apologize to all of the people of China.” While the original piece has already been deleted, the “Observer” “website has reported the facts in connection with these statements.

That said, we must think very carefully and profoundly about what it means that a media outlet affiliated with the Communist Party of China has written such things.

Hu Xijin has certainly been known for sharing fairly liberal views. However, in a sense, this may be a diversionary tactic by the Beijing government to deflect criticism and relieve some of the pressure it faces from the public.

When the Internet raged at the death of Dr. Li Wenliang, Beijing immediately dispatched the director of the National Supervision Commission from the Communist Party to Wuhan. It embraced a posture that suggests that “the central government is closely watching the situation.” This is because if Beijing had not done so, the people’s anger would not have settled down.

Hu Xijin of the Global Times expressed his condolences upon the passing of Dr. Li Wenliang and his anger at the Hubei and Wuhan governments. These statements might have been part of the Beijing government’s posturing, so it may be too early to conclude that Hu Xijin truly spoke on behalf of the people. Conversely, we must also watch for the possibility that Mr. Hu was simply channeling the central government’s line that “the Hubei and Wuhan governments are to blame, not Xi Jinping.”

In any case, it is certain that the people’s anger was so strong, that the Beijing government had to go to these extraordinary lengths to quell it, and that the government was backed into a corner and had no choice but to make Xi Jinping appear in public.

Suppression of free speech and appeasement constitute “acts of murder”

The death of Dr. Li Wenliang and the spread of the new coronavirus point to a simple fact: “the suppression of free speech and appeasement politics can kill people.”

As I wrote in my January 24 article, “Why did it take Xi Jinping so long to deal with the novel coronavirus?,” if the Wuhan government did not have to cover up the truth by “appeasing Beijing,” Dr. Li Wenliang would not have had to die, and the new coronavirus would have been contained before it could grow to what is arguably of pandemic proportions.

Then, does the blame rest entirely with the local governments of Wuhan, Hubei and other municipalities? Of course, they are huge offenders. However, responsibility lies not only with them. To get to the bottom of things, we must recognize that the Chinese Communist Party’s authoritarian system of control is ultimately to blame because it has shaped—and corrupted—the mindset of these local officials. We need to focus on the fact that the suppression of free speech and the spirit of appeasement fostered by single-party rule are directly linked to “murderous acts.”

This also has some bearing on the current state of political affairs in Japan. I believe that humanity must squarely face these underlying “murderous acts.”

In these circumstances, it’s fair to say that inviting Xi Jinping as a state guest to Japan is absolutely out of the question.

I have shared all of my thoughts and ideas about how much catastrophic damage will be done by the act of inviting Mr. Xi as a state guest to Japan—even without considering the problem of the new coronavirus—in my book “Gekitotsu! Endo Vs. Tahara Nicchu to Shu Kinpei Kokuhin” (Homare Endo Versus Soichiro Tahara: Debate on Japan-China Relations and Inviting Xi Jinping as a State Guest to Japan).