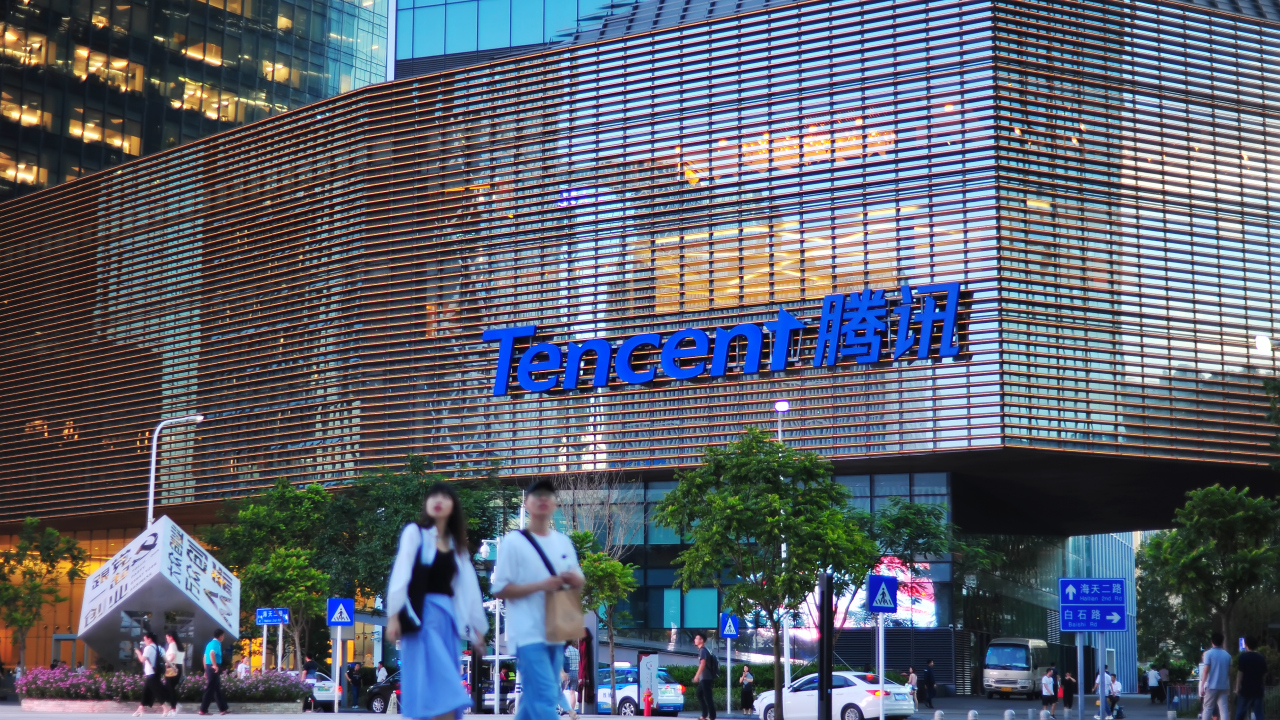 View of the headquarters of Tencent in Shenzhen city（Photo provided by : アフロ）

Fundamentally, the birth of blockchain technology provides a new value transfer channel, in a true sense, to the digital economy, and the technology has an unlimited range of applications. The Ministry of Industry and Information Technology (MIIT) of China officially published the “Blockchain Technology and Application Development Whitepaper” in 2016. Since then, Tencent Holdings Limited has been carrying out research into “blockchain plus” applications. Conventional manufacturing firms are facing problems such as rising costs, falling earnings, and a dearth of innovation capacity. Within this environment, the Tencent Cloud Blockchain (TBaaS) is capable of offering total reform proposals to conventional firms by integrating technologies such as AI, big data, and cloud computing. It primarily uses blockchain technology to link corporate procurement, production and sales activities, thereby balancing the amount of time suppliers spend on production and supply activities. Furthermore, this blockchain technology enables the traceability and tracking of the supply of components, which helps to save time, and enhance quality assurance. Buyers place orders accordingly, producers conduct on demand production, and dynamic adjustments are made according to the market conditions reflected by blockchain nodes. This allows the minimization of production and inventories. For production processes within a company, the introduction of blockchain realizes “smart manufacturing”. Based on the data supplied by the Internet of Things (IoT), companies are able to not only dynamically adjust production in accordance with upstream and downstream data, but they can also provide an intelligent (smart) sales and service platform by uploading production data to the blockchain in real time.

Among the Tencent Blockchain Applications that have already been realized by 2019, “Blockchain Plus Civil Sector” projects have attracted a lot of attention. Some typical examples that provide instructive case studies are “tax chain,” a blockchain digital receipt project; “micro-enterprise chain,” a project to provide services to small and medium-sized enterprises; “letter chain,” which stores evidence for the judicial system, and “retail bank draft project.”

In the following section, I’d like to consider the specific circumstances of each of the aforementioned examples.

The “tax chain” manages the entire process from issuance of digital receipts to refunds, reporting, audits and other activities, thereby providing personalized and convenient services to taxpayers, while at the same time reducing costs and improving efficiency. Up to August 5, 2019, the “tax chain” had already issued nearly 6 million digital receipts, equivalent to an average of 44,000 receipts issued per day, with a total transaction amount reaching 3.9 billion yuan. Born as an Internet product, these receipts have made it possible to realize traceability across all processes of tax agencies, the decentralization of operations, and online tax processing and paperless refunds. The “tax chain” can realize a win-win situation by providing services at low cost to many small and medium-sized enterprises, expanding the business scale of financial institutions in safer ways, and sharing data among the government, banks and companies. Blockchain digital receipts are the culmination of research into China’s first “blockchain plus” receipt ecosystem.

These blockchain digital receipts, which have just emerged, have made significant strides in a large number of fields, including not just in the finance and insurance sector, retailers, and the food service sector, but also the WeChat online shopping platform, WeBank (the first online bank in China, set up mainly by Tencent), property management firms and parking lot operators.

This new form of supply chain finance based on the aforementioned blockchain enables corporate business information to be supplied more accurately and completely to financial institutions. This, in turn, allows the financial services sector to supply even better services to the real economy, making financial support even more easily accessible to small and medium-sized enterprises.

The letter chain’s first goal was to become an integral part of the infrastructure of the smart judiciary. To achieve this goal, with the authorization of the Supreme People’s Court of China, the China mobile micro courts have already been set up as China’s only mobile litigation platform. Several local high courts have participated in the letter chain and have become core nodes. More than 10 million pieces of evidence data have been stored on this blockchain at this time. The letter chain has increased the reliability of judicial evidence, reduced judicial costs, and improved judicial efficiency. For individual users, the letter chain provides functions such as one-click evidence uploads, evidence confirmation, inspection and measurement of rights infringement, evidence sourcing, and evidence storage. By doing so, it has satisfied the needs of users to upload, store, and download reliable evidence. At the same time, the letter chain links the storage of evidence by users and judicial management, and provides mutual support and verification, enabling it to fulfill a wide range of judicial needs. The letter chain also has functions such as copyright registration, data surveillance and storage of copyright infringement evidence, allowing swift enforcement of the law. Since the letter chain is an open ecosystem, complete and rapid development of smart contract templates in the civil sector and economy can be done easily. At the same time, it protects the privacy of anonymity, and can control breaches of individual privacy.

The letter chain can also effectively protect the intellectual property of individual creators. In August 2019, the letter chain began providing services. Accounts can be easily registered by not only the courts as well as banks, insurance companies and other corporate users, but also individual users such as authors, painters, and illustrators, allowing them to use the safe and efficient judicial services of the letter chain. Currently, Tencent’s “Penguin” individual media platform is already connected to the letter chain, with more than 50,000 pieces of evidence data stored every day. The Tencent original gallery is a design site created to promote high quality, original works of art. It has also only recently been connected to the letter chain. With plans to store 200,000 pieces of individual private property data per year, it is likely to contribute immensely to the protection of creators’ intellectual property and interests.

As a traditional finance business, bank drafts have always served as an important payment and fund raising tool for companies. However, in the field of bank drafts, the practices of using paper-based bank drafts and managing them manually have consistently remained the norm. These relatively outdated methods have an impact on the operational efficiency of the market and have limited the development of the bank draft market to a certain extent. However, the retail bank draft project based on blockchain technology has characteristics such as preventing falsification, being tamper proof and decentralized, and having a multi-node design. For this reason, it can be used to build a shared, open, transparent, reliable, and verifiable traceability system. Through the blockchain, commercial banks will be able to convey business information on activities such as the issuance, settlement, endorsement, refund, cancellation, storage, payment and liquidity of bank drafts. The retail bank draft project has adopted an approach known as a hybrid blockchain. It realizes decentralized and distributed storage of large files, allowing contracts, receipts, video data and other content to be stored on the blockchain together with bank draft information. The project has thus effectively solved the problem of storing large files. At this time, the retail bank draft project based on blockchain technology has already deployed 48 nodes, and issues around 200 bank drafts per day. The project has activated users’ assets and expanded how those assets can be used, achieving an innovative business model where “bank drafts are confirmed on the blockchain and settled offline.” This has successfully delivered convenience to users, enhanced efficiency and effectively hindered risks in the bank draft market. (Source of the above application examples: Tencent Cloud Blockchain TBaaS Product White Paper 2019)

China has a very large market, but due in part to special support from the government, there is currently a shortage of human resources and the basic technology has not been perfected. There are also certain companies engaged in overblown advertising and other problematic practices. However, “blockchain plus applications,” which have just got started, have already gained significant momentum. “Blockchain plus applications” have a bright future and there is no doubt that they will be at the forefront of global technology.

The initial phase of the “Blockchain plus applications in the civil sector” project has been completely established at this time. Along with AI and big data, blockchain has become a national strategic emerging industry in China. Various platforms have already been built, including “smart city + smart healthcare,” “AI + medical insurance analysis,” “health information system for residents of cities and rural villages,” “smart living and digital government cloud computing center,” and “smart community comprehensive service management platform.” In essence, this progress signifies that the combination of blockchain with the civil sector and industry is a prime opportunity for capital both within China and abroad to find investments and capture a competitively superior position in the industry.

In my own personal view, investors in China and other countries should make sure that they do not miss out on this opportunity.