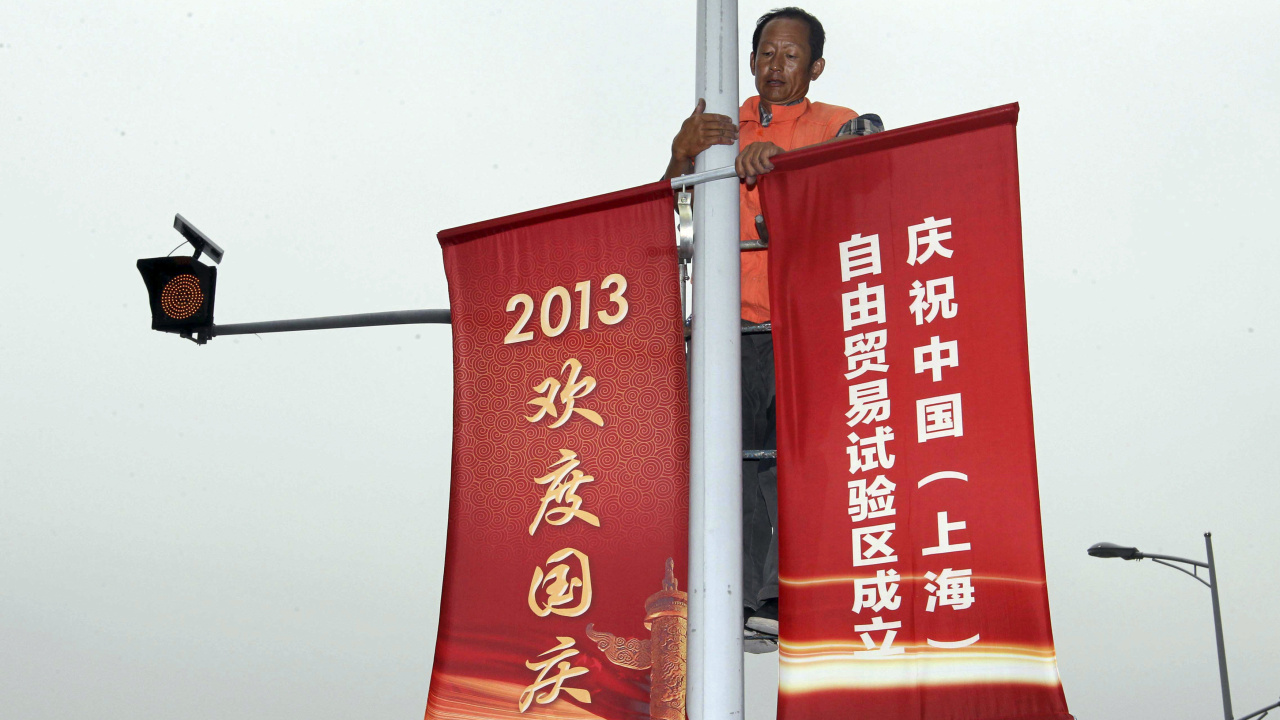 A worker attaches banners to a street lamp ahead of the launching of the Shanghai Free-Trade Zone (FTZ) in Shanghai, September 28, 2013. ( Photo provided by ロイター/アフロ )

In 2013, the People’s Republic of China entered the second stage of foreign economic openness. At the first stage, which started in the late 1970s as an integral part of the overall reform policy, China focused primarily on attracting equipment and technology, knowledge and capital from abroad.  At the new stage, the mass export of Chinese capital, goods, services and technologies abroad becomes, at least, an equally important task.

Current stage of China’s foreign economic openness is usually associated with Beijing’s proposed geo-economic projects of the new land and sea “silk roads”, in the implementation of which more than a hundred States are already involved in one form or another.

Another important element of this stage was the creation of experimental free trade zones (EFTZ), designed to help China master the most advanced world rules and regulations for trade, investment, and international banking. So far, however, the EFTZ  have not received the attention of the international community  that they actually deserve. The main reasons seem to be two. First, EFTZ were in the shadow of  the “Belt and Road Initiative” – a larger and more suitable for advertising and propaganda promotion of the phenomenon. Secondly, the very name of the new economic phenomenon, similar in abbreviated form to the name of interstate free trade zones actively created by China, played a certain negative role – in both cases, it is “zimao qu” (自贸区). Attempts to get out of the situation by introducing the additional word “experimental” or “pilot” (“zimao shiyan qu” -自贸 试验区), as well as the use of different English-language names of the two types of zones  – respectively, “zones” and “areas” – did not really solve the problem.

However, China’s experimental free trade zones have been in existence for more than six years. A variety of operational experience has been accumulated and partially implemented in national practice.  It seems that in the very near future these zones will become widely known internationally, close to the situation that had happened at the first stage of foreign economic openness with special economic zones of China.

The chronology of the establishment of EFTZ in China is of informal interest.

The establishment in autumn 2013 of the first such zone in Shanghai was directly related to the task facing China at that time to join the club of the most advanced countries in the trade and investment sphere of the world in the format of the Trans-Pacific Partnership. Negotiations on its creation seemed to be nearing completion, and it was important for China to demonstrate a willingness to focus on advanced standards of world trade.  In its own way, the choice of the duty-free zone of Waigaoqiao with an area of 28.78 square km as the initial site for the placement of the EFTZ was indicative. China had demonstrated the possession, if not all, but at least some of the best foreign trade practices.

In the same vein, the second phase of the establishment of the EFTZ was sustained – at the end of 2014 in Tianjin, Fujian and Guangdong. The choice of territories strengthened the general orientation of the PRC to adapt to the most advanced norms and rules of the foreign economic segment of the world economy. As the Belt and Road Initiative progressed, China began to claim greater participation and, so to speak, its own voice in the development of norms and rules for the functioning of the world market. These ideas came to the fore when formulating tasks for the next group of EFTZ established in August 2016 – Liaoning, Hubei, Chongqing, Zhejiang, Sichuan, Henan and Shaanxi.

In the spring of 2018, the creation of the Hainan EFTZ was declared. Perhaps its main goal is a processing of the concept of a free port, actively proposed in relation to Shanghai, but clearly less risky in the case of the port of Yangpu on Hainan.

Meanwhile, 2019 was marked by a deterioration in the conditions of foreign economic activity in the world, in no small part – as a result of the so-called US-China trade war. The PRC, facing now the conditions of “partial deglobalization”, primarily is solving the task of overcoming current difficulties, maintaining the achieved volumes of foreign trade and investment.  One of a series of measures to stimulate foreign economic activity was the establishment in August of six new EFTZ, three of which (Guangxi, Heilongjiang and Yunnan) are located in the border regions of the country – the places of brisk cross-border trade. The other three zones were established in Shandong, Jiangsu and Hebei.

Of course, the long-term lofty goals of the EFTZ remain, but they have been complemented by more pragmatic current objectives.

The activities of EFTZ are regulated by specially designed for each zone Provisions (“tiaoli”). Most zones consist of three sections and have a total area of about 120 sq. km. Both the zones themselves and their sections have special, but not unified, organs of administrative controls. The economic objectives of the zones are fixed in the comprehensive development projects (“zongti fang’an”). The main tasks are general in nature: simplification of formalities in the registration of trade transactions with access to the principle of “one window”; expansion of the spheres of economy and social services for foreign capital on the basis of the “negative list” of industries closed to foreign investments and decreasing from year to year; development of interaction with external banking and business circles in financial services. Most of the zones are also endowed with the function of assisting the construction of land and sea “silk roads”.

At the same time zones and their constituent areas have more specific goals tied to geographical features of the region, for example, the development of Dongbei and integration in Northeast Asia (Liaoning  EFTZ), stimulating the development of cooperation in the “Large Bay” region (Guangdong EFTZ and cooperation between Guangdong, Macao and Hong Kong), cooperation with the countries of the “Belt and Road” in the agricultural sphere and in culture (Shaanxi EFTZ), etc. Rather often even separate parts of zones face very ambitious geo-economic challenges. Thus, Dalian should become one of the largest air cargo hubs in Northeast Asia. Zhoushan archipelago (Zhejiang) will grow into the largest center of refueling ships on the Asian coast of the Asia-Pacific.

Currently, the EFTZ accounts for about 12% of China’s foreign trade turnover. The first significant economic results of zones activity are expected in 3-5 years after the start of their practical work.

The establishment of the EFTZ  in Heilongjiang province is a landmark event for Russian-Chinese trade and economic cooperation, especially given the fact that specific areas of this zone – the capital of  province Harbin, the border cities of Heihe and Suifenhe are invariably at the forefront of our interregional cooperation.