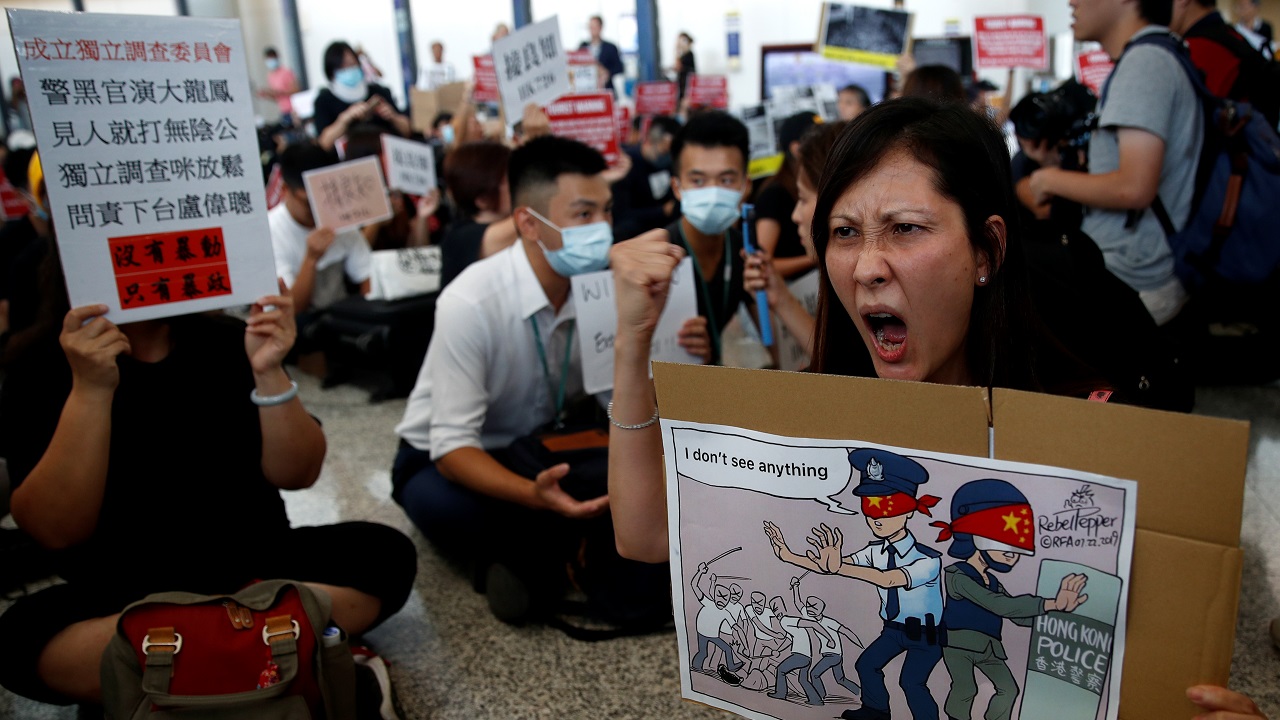 Protests by Hong Kong citizens over Fugitive Offenders and Mutual Legal Assistance in Criminal Matters Legislation (Amendment) Bill have been intensifying. Hong Kong, where Western values and the Chinese one-party rule principle compete with each other, may be the last bastion against not just “One Country, Two Systems” but “One World, Two Systems”. Can Japan keep taking a neutral stance?

Largest protest that Hong Kong has ever experienced

The Tiananmen Square protest on June 4, 1989 is said to have been participated by up to about 1.5 million Hong Kong citizens.

The second largest demonstration was against the “National Security Ordinance, Article 23 of the Basic Law of Hong Kong” in 2003, participated by 500 thousand people. The demonstration successfully resulted in the repeal of the legislation. Not only was the legislation repelled, the then Chief Executive was forced to resign, which increased the passion and confidence for Hong Kong citizens to defend freedom of speech.

This was reflected in a protest against the so-called “patriotic education”, indoctrination policy demanded by the Beijing government in 2011, which was postponed indefinitely in the following year. Joshua Wong, born in 1996, significantly contributed to this protest. As a founder of the group Scholarism, he gave a speech at the Legislative Council, essentially the Parliament of Hong Kong, on June 27, 2011, leading the fight even managed to mobilize parents and teachers. He was only 15 years old at that time. No doubt he was the youngest leader of a public demonstration in history. The demonstration itself did not necessarily attract as many people as other major protests. However, the reason they successfully achieved the indefinite postponement of the proposed legislation, was that actions were voluntarily taken by citizens and students, including high school students.

In contrast, the “Umbrella Movement” (Umbrella Revolution, or Occupy Central) organized in 2014 for universal suffrage failed, although the demonstration was participated in by as many as 1.2 million students and citizens. I published my detailed analysis on this failure in a book, which is still painful to remember.

The point is that an external force, the National Endowment for Democracy (NED) of the United States, got involved behind the scenes, making it less focused and cohesive. NED has had an active role in the democratization of countries around the world, but the situation in Hong Kong is a little different. If you are interested, please read the discussion in my article titled “Hong Kong Protests Undermined by a U.S.-China Hidden Battle over AIIB – Occupy Central and NED” dated March 30, 2015.

In the recent case of Hong Kong, neither NED nor Taiwan’s pro-independence has directly influenced the demonstration from behind the scenes. Hong Kong citizens feared greatly that they may well be wrongly arrested and transferred to Mainland China at any time, encouraging them to join the protest voluntarily. This is why the protest was united.

According to organizers, the number of protestors reached about two million at its height. This is the largest such demonstration in Hong Kong’s history.

A survey conducted by the University of Hong Kong was released on January 22, 2019.

The results of the public perception survey revealed the following:

The University of Hong Kong’s website says “About 37% of the young generation (18 to 29 years of age) supported the independence of Tibet in the survey last year, and it increased to 43% this year, the highest percentage since the survey was started in 2000”.

This means, many of the younger generation in Hong Kong are against Beijing government’s control.

This is due to the fact, that Xi Jinping has suppressed freedom of speech more and more aggressively, causing a series of incidents in which bookstore owners in Hong Kong were arrested by the government.

So, in order to avoid any repetition of the failure of the Umbrella Movement in 2014, mainly the younger generation, saw the recent movement as the final opportunity to fight for independence. Older generations are more economically tied to Mainland China and, therefore, they tend to be more sensitive to Beijing’s will.

Hong Kong: The ultimate fortress of democracy that prevents “One World, Two Systems”

I have written many times that the root cause of the confrontation between the United States and China, is a high-tech trade war symbolized by the national high-tech strategy called “Made in China 2025” led by the Xi Jinping administration.

It is also being expected that President Trump is attempting to destroy socialist countries during this confrontation. In this sense, the confrontation between the United States and China can also be viewed as a clash of Western civilization and communist ideology.

From early on, Hong Kong has been a place where these two big civilizations met and coexisted.

When the People’s Republic of China was established in 1949, many capitalists and people who sought freedom from the one-party rule by the Communist Party of China (CPC), escaped to Hong Kong. Up until that time, during the period of the Republic of China led by the Guomintang, many on the Mainland during that time feared the CPC and called them “communist bandits”.

When the Cultural Revolution began in 1966, some of the common citizens who had stayed in the Mainland also escaped to Hong Kong from persecution. “Western civilization” still existed in Hong Kong as a British colony.

After China’s policy of reform and of opening doors came into effect in 1978, Hong Kong became more and more important as the financial center for the Mainland, strengthening its presence as a bridge for Western countries and the socialist state of China.

Hong Kong was handed over by the British to China in the name of “One country, Two systems”, which triggered many wealthy Hong Kong citizens to flee from one-party rule to Canada, Germany, Britain and Australia, expanding their Chinatowns.

The United States, once the mecca of democracy, is trying to leave global economy, advocating the slogan of America First and unilateralism, under the administration of President Trump. Meanwhile, Xi Jinping is trying to become the leader of the global economy.

In an aim to catch up with and overtake the United States, China is reaching the global top position while polarizing the world (See “Japan May Have the Key to Global Polarization“).

It may sound extreme, but some day not just global polarization but “One World, Two Systems” may become reality, in which China is at the top of the world and only different systems remain. That is something we have to avoid.

After absorbing Taiwan, China will occupy the First Island Chain and approach Japan.

To commemorate the 70th anniversary of the People’s Republic of China, the Chinese (Beijing) government wishes to get Hong Kong and Taiwan under control at the same time. That is why Xi Jinping, in his latest New Year speech titled “To fellow citizens in Taiwan”, declared that China would move forward to One Country, Two Systems also in Taiwan based on the 1992 Consensus, while trying to enact the Fugitive Offenders and Mutual Legal Assistance in Criminal Matters Legislation (Extradition Ordinance)” in order to send those who “fight for democracy” in Hong Kong to Mainland prisons as soon as possible. This is the cause of the ongoing protests in Hong Kong.

By the way, what is Japan doing now?

Japan is firmly against small countries like South Korea, while flattering big countries like China. It cannot argue against accusations of harbouring a “slave mentality”.

There is a cabinet somewhere that is proud of such an event, like a treasure or a trophy.

It is Japan that facilitated the Emperor’s visit to China in 1992, bringing the present prosperity of the country (See “Japan-Russia Diplomatic Negotiations: Japan Won’t Be Able to Fix the Defeat to Russia and China in 1992“).

Will Japan accept, even try to bring about the rule by raw power of China, which suppresses speech, to outdo the United States?

Regarding the recent movement by Hong Kong citizens, many of the Western countries issued messages of protest to China, but what action has Japan taken?

As the public perception survey by the University of Hong Kong suggests, the Japanese cabinet values opinions of the economic community, because it is linked to a voting bloc.

It is shameful and dishonourable to the greatest degree.

Compared with that, Hong Kong’s young people are so courageous and bright!

Don’t give in to tyranny, Hong Kong citizens!

I send you my hearty support from a corner in Japan.

(This paper was written on 31 July)