言語別アーカイブ
基本操作
Like the Chinese Communist Army Scrambling for the Japanese Army Immediately after Its Defeat: The Taliban Wants the U.S. Embassy to Remain
遠藤 誉／Homare Endo 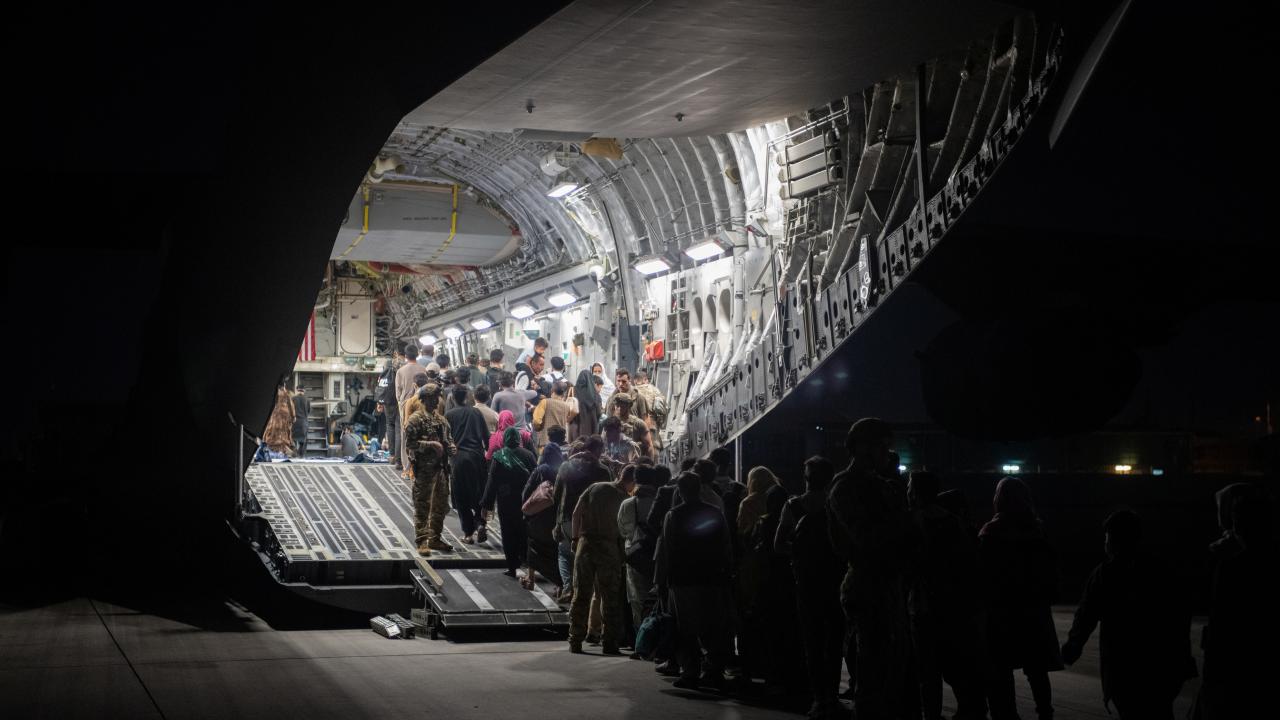 While the Taliban had fought the U.S. military as an enemy, they now want the U.S. Embassy to remain and have asked Turkey to manage the airport. This reminds me of the Chinese Communist Army scrambling for Japanese military’s technology in China after the surrender of Japan. The lack of air power was also seen in both cases.

◆The Taliban Announces Its Desire That the U.S. Embassy in Afghanistan Remain

U.S. State Department Spokesman Price revealed on August 27 that the Taliban made it clear to the U.S. government that they wanted the U.S. Embassy in Afghanistan to remain after the U.S. troops withdrawal deadline in late August. Reuters and Kyodo News reported such.

Reuters also reported that Spokesman Price stated, “We can maintain a humanitarian commitment to the Afghan people in ways that do not have any funding or assistance pass through the coffers of [the Taliban].”

That Taliban now desires the United States, which has been believed to be their biggest enemy, to maintain their embassy in Afghanistan. This is simply unbelievable.

As I wrote in my article dated August 27 <Cooperation between the Taliban and the U.S. Military on Counterterrorism? Terrorist Attack at Kabul Airport and Dilemma of Xi Jinping>, however, the Taliban and the United States have already joined forces to eradicate their common enemy = terrorist organization since the terrorist attack on the Kabul airport. It is not unnatural, therefore, for them to want the United States, which is a symbol of Western countries, to keep an embassy at any cost.

Having an embassy would mean recognizing the Taliban regime as a state.

If the United States continues to maintain its embassy, other Western countries may also return their embassies and recognize the Islamic Emirate of Afghanistan founded by the Taliban as a state.

This is probably the reason why the Taliban took the strategy of defeating terrorist organizations in cooperation with the United States.

The Taliban is very tough and wise.

◆Turkey Is Requested to Manage the Kabul Airport

The U.S. military will manage the Kabul airport until August 31, but if the troops withdraw on that day, no one will be managing it.

The Taliban did not have airplanes, and do not have aeronautical technology or personnel with airport management skills. If the U.S. troops leave, therefore, Kabul’s skies will be stalled.

Thus, they are asking Turkey, which is also an Islamic country, to take over the management of the Kabul airport. As of August 28, however, President Erdogan has not made a final decision. Regarding this issue, there have also been a great number of press reports, including a Reuters’ report dated August 26 <The Taliban Requests Turkey to Help Operate the Kabul Airport> and the most recent report dated on August 28 <The Taliban Requests Turkey to Operate the Kabul Airport in Turmoil>.

In essence, while the Taliban wants Turkey to withdraw their troops and only manage the airport, Turkey’s attitude is that they cannot agree to technical assistance if the Taliban demands complete withdrawal of Turkish troops, because there is risk in the safety of workers without Turkish troops.

Due to the terrorist bombing that killed more than 170 people on August 26 in particular, they have become more cautious, saying that ensuring safety is a prerequisite. So, in case of failure to find a point of compromise, the Taliban seems to have also turned to Qatar for airport management.

The Taliban is good at fighting in mountainous areas, but they did not have aircraft. In the battle against the government forces following the withdrawal of U.S. troops, the Taliban took Shindand Air Base and Kandahar International Airport, which were under the control of the Afghan government forces, and acquired only aircraft. They, however, do not have aircraft operation skills. Airport management is even more difficult, and they have to ask another country to do so.

As I wrote in my article dated July 27, 2015, <China’s Air Force Was Created by the Former Japanese Military: Stride 2015-Zhurihe Military Drill>, when news of Japan’s acceptance of the Potsdam Declaration spread on August 14, 1945, Mao Zedong, the leader of the Chinese Communist Army, immediately marched his troops to the Japanese military bases across the continent.

However, having prepared for the Chinese Civil War that had been expected following Japan’s surrender, the Chinese Communist Army advanced to Hebei and Shandong Provinces and the Northeast China (formerly Manchukuo) controlled by the Soviet army, demanded disarmament of the Japanese army, and acquired no small amount of weapons and prisoners of war.

Among them, the most noteworthy are more than 300 soldiers and dozens of military aircraft from the Kwantung Army’s 2nd Air Army, 101st Training Air Brigade, and 4th Training Squadron, which were captured by the Chinese Communist Army at the end of September 1945.

This is because the central agencies of the Communist Party of China did not have an aviation school or airport. At the beginning of September, Mao Zedong ordered the General Department of the Northeast Democratic United Army to speed up the establishment of an aviation school. There were, however, no people who could be instructors. That was why he fixed his sight on the former Japanese Air Force personnel.

The leader Hayashi and others, who were in Liaoning Province as former Kwantung Army soldiers at that time, accepted the Chinese Communist side’s proposal on the condition that they would not be sent to Siberia and would be treated as instructors instead of prisoners of war. Thus, the Northeast Democratic United Army Aviation School of the Communist Party of China was born on March 1, 1946. This was the first Air Force school on the Chinese Communist side (for details, see my book “Mao : the man conspired with Japanese army”).

At the end of 1949, after the birth of the People’s Republic of China, 6 more aviation schools were established, forming the basis of today’s Chinese air force.

The Taliban’s movement is very similar to the situation of the Chinese Communist Army led by Mao Zedong in the 1940s.

◆Concerns about the Continued Presence of the Chinese Embassy

There are still embassies of several Muslim countries, in addition to Chinese and Russian embassies, in Afghanistan. The Turkish Embassy was also relocated to the airport, but rumors are circulating on social media in English that the embassy is going to return to its original location.

In that case, the United States might keep their embassy.

The Taliban wants no country’s military to remain, but strongly desires as many embassies as possible to remain. It is probably because they want to be recognized as a state.

President Biden is adamant that he will make the terrorists atone for their crimes, but he is seemingly being driven to the unbelievable idea that cooperation with the Taliban is necessary to preserve the United States’ honor. Behind that assertive statement, there must be secret collaboration with the Taliban. It may not be a bad choice for Biden to join forces with the Taliban for the eradication of terrorism in the face of growing calls for his resignation.

The withdrawal of U.S. troops from Afghanistan was originally initiated by former President Trump’s peace agreement with the Taliban. It is no wonder, therefore, that the Taliban and the United States behave in accordance with the peace agreement.

◆It Is Urgent to Improve Education and Develop Technicians

I found an interesting story on Weibo in China.

There is a Chinatown in Kabul, and a Chinese merchant there reportedly went to an office of the Taliban government on August 26 to ask for a certain permit. Then the guard came in a hurry and said politely, “Can I help you?” The interpreter said, “This person is Chinese” and the guard immediately guided them inside saying, “Please come in.” As soon as the merchant spoke of the business, the official immediately signed the permit, and the merchant was able to leave the government office in a matter of minutes.

While this story became popular in the sense that it was a close call, what we can see through this story is the low standard of education in Afghanistan. Many Taliban soldiers are illiterate, and the literacy rate in Afghanistan is also very low as a whole.

Since the United States has frozen banks in Afghanistan, people cannot withdraw their money. Even if that were not the case, the economy is in dire straits and, if nothing is done, it will become a hotbed of terrorism again.

The only way to prevent terrorism is to assist economic development by promoting education throughout the county. Otherwise, the world will be threatened by terrorism again. There are many things Japan can do to prevent this.

From the perspective of what Japan can do to protect the world and Japan from future terrorism, rather than to help the Taliban, it may be urgent to improve the education of Afghans and develop technicians.

This information in Weibo happened to make me look at such things.

This article is an English translation of the article on August 29th.