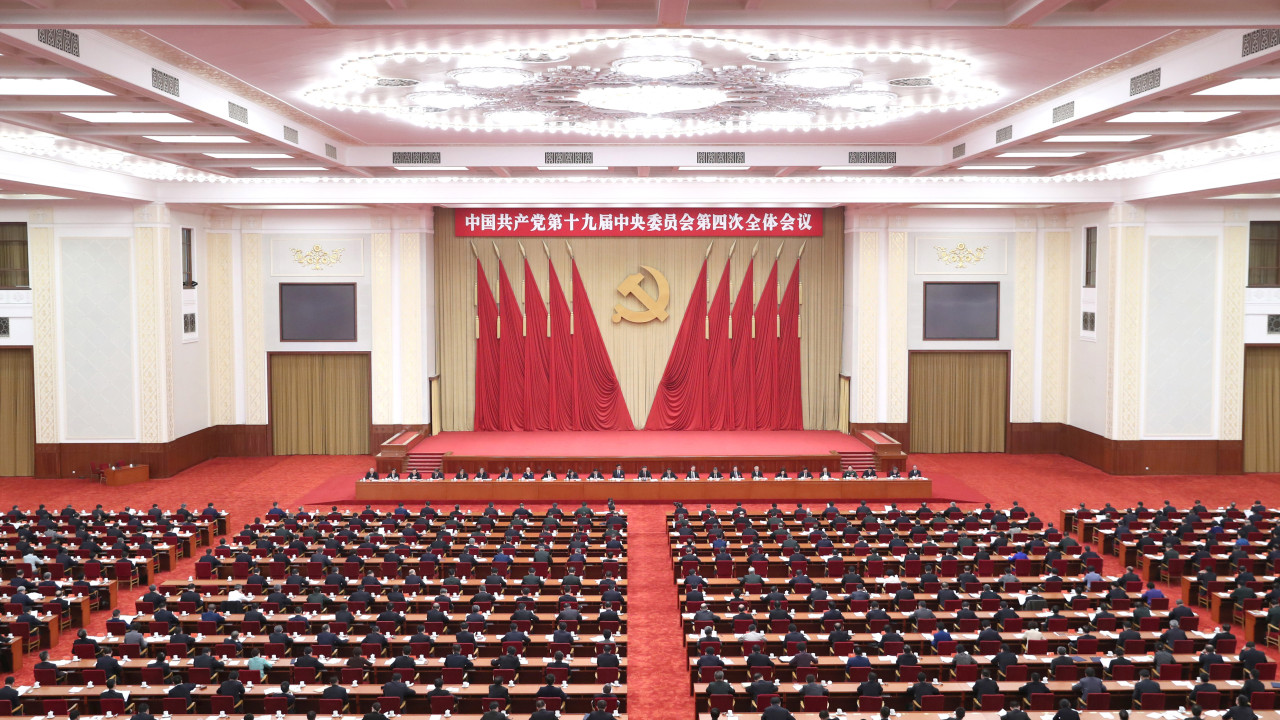 On October 24, Xi Jinping unveiled the blockchain strategy. Thereafter, Mr. Xi completed the fourth plenary session, traveled to Shanghai and discussed “Chinese democracy” in his remarks on October 31. Blockchain is now a major focus of attention in Shanghai following Mr. Xi’s keynote speech at the China International Import Expo. What is the significance of these developments?

Let’s look back at the past 30 years or so and compare the timing for holding the National CPC Congress and the fourth plenary session.

Therefore, they simply restored the fourth plenary session to the normal schedule for holding these meetings.

Next, I’d like to take a look at another rumor that was making the rounds. Some people wildly speculated that “A leadership shuffle was supposed to happen, but there was none. That was because Xi Jinping doesn’t have enough power to choose a successor.” However, since the foundation of the People’s Republic of China, the fourth plenary session has never, not once, discussed the subject of personnel and leadership placement.

If we allow ourselves to be preoccupied with such trivial matters, we will completely lose sight of the crucial fact that the PRC is watching eagerly for the opportunity to overtake not just Japan, but also the U.S.

The important thing about the most recent fourth plenary session is to understand what happened before and after the session and what kinds of trends are currently shaping China.

As I wrote in my column titled “Xi Jinping’s Level of Commitment to “Blockchain and Digital Renminbi” National Strategy” dated November 4, Xi Jinping, as General Secretary of the CPC, held a meeting called the 18th group study session of the CPC Central Committee Political Bureau on October 24. At the meeting, Mr. Xi gave the following order: “We must take blockchain as an important breakthrough for independent innovation of core technologies. We must accelerate the development of blockchain technology and industrial innovation.” He also sent a strong message urging the use of an application called “blockchain plus” in the real economy and civil sector.

After holding the fourth plenary session from October 28 to 31, Mr. Xi immediately went on an inspection tour to Shanghai. For details, please follow this link.

The inspection tour was conducted from November 2 to 4. On November 5, Mr. Xi visited the 2nd China International Import Expo and delivered the keynote speech at the opening ceremony.

According to Mr. Xi, one example of “various forms of democracy” is the local people’s congresses (the local versions of the National People’s Congress). On the desks of the halls of the local people’s congresses are anonymized voting buttons that symbolize Chinese democracy. Mr. Xi also said, “People consult with each other on a variety of problems in daily life, such as whether or not to install an elevator in a condominium building, deciding on the time and place for disposing of household garbage, and when to open and close the condominium building’s security gates to ensure both safety and convenience. This is another form of democracy. Rather than deciding everything all at once with a single vote, the people can consult with each other beforehand, and express their opinions openly on a website. Figuring out how to solve these kinds of issues in the civil sector is one type of service to society.”

I’m probably not the only one who finds these remarks to be somewhat unusual.

In Hong Kong, protestors are now conducting fierce demonstrations, seeking the very democracy that Mr. Xi talked about. His words must ring hollow to almost everybody.

However, we must consider the fact that the events in Shanghai on November 2 were not reported until November 13, after the China International Import Expo had ended on November 10. It will become increasingly clear that Mr. Xi’s carefully crafted strategic goals lie behind this fact.

On November 7, it was reported that “Shanghai vows to accelerate the development of international trade using blockchain technology, at the 2nd China International Import Expo.” At the expo, it was announced that the state will start to offer public services using a system called “blockchain plus,” as an initiative to provide many different social services through “a single window.” This announcement came as part of the aforementioned instructions given by Mr. Xi at the 18th group study session of the CPC Central Committee Political Bureau held on October 24. The main thrust of the announcement was that the Shanghai International Trade Single Window blockchain plus services platform will be launched and will be used to improve convenience for the civil sector. The project will be a joint undertaking by partners such as the Shanghai Municipal Commission of Commerce (Shanghai Inspection Office), Shanghai Customs, People’s Bank of China Shanghai Headquarters, Shanghai Food and Drug Administration, and the Bank of China Shanghai Branch.

Mr. Xi went all the way to Shanghai to make his remarks on “various forms of democracy.” I believe that these remarks can be linked to blockchain technology. Although this is a very roundabout way of expressing things, if you were to forcefully link Mr. Xi’s remarks with blockchain, you could say that “Blockchain technology has certain decentralized characteristics, and these characteristics are highly compatible with democracy.”

I asked Professor Sun Qiming, a senior researcher who is the Global Research Institute on Chinese Issues’ representative in China, to share his perspectives on the significance of these events. In response, while first acknowledging that his comments reflect a completely personal opinion, Professor Sun provided the following reply:

——“On the surface, one can say that Xi Jinping’s remarks on democracy and blockchain are unrelated. However, from a macro perspective, China is trying to raise its game in terms of opening up to world through blockchain technology. This harbors the potential for speeding up the level and process of democratization within the country. From a micro perspective, blockchain technology is essentially a universal technology for the distributed registration and recording of data. Naturally, blockchain technology can be used in the future to register various requests made by ordinary citizens in their daily lives, and to record various types of information and activities. Additionally, recordkeeping using blockchain is extremely transparent and tamper proof. This will indeed provide a sort of technical assurance to prove the authenticity of local requests obtained by gathering people’s opinions. In a sense, this will pave the way for fostering ‘various forms of democracy.’”

Thanks to Professor Sun’s remarks, I can now see a little more clearly why Xi Jinping went out of his way to speak to the people about “various forms of democracy” in Shanghai.

Come to think of it, Andrew Yang, one of the candidates for President of the United States has also called for something similar. In his policy platform, Mr. Yang has laid out plans to implement blockchain voting in order “to revolutionize true democracy.”

Information that cannot be tampered with and that always leaves a record will ultimately increase the state’s ability to gather information, paving the way for strengthening its surveillance capabilities. I cannot help but think that blockchain technology may actually create a highly advanced surveillance society that has almost absolute surveillance powers. With this in mind, I’d like to continue to watch how things play out in the future.

(This article was republished from a column in Yahoo Japan News.)