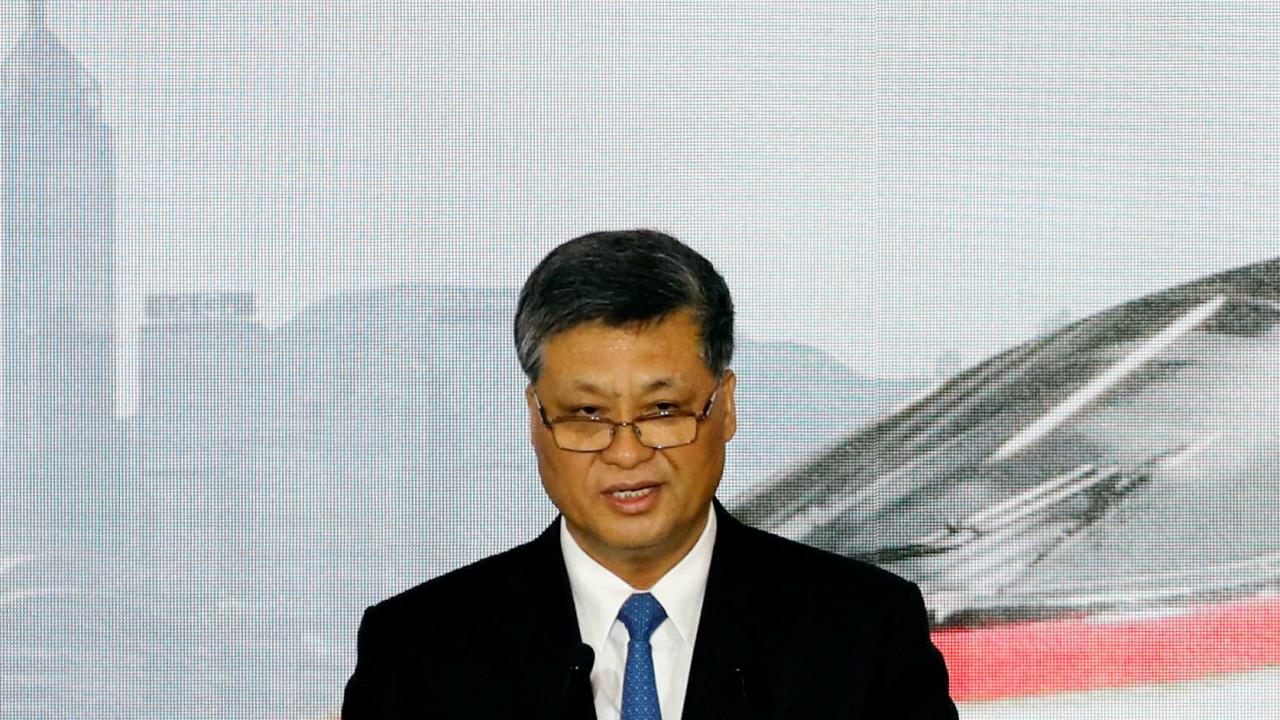 Ma Xingrui, the governor of Guangdong, was appointed as the Communist Party Secretary of Xinjiang. REUTERS/Tyrone Siu (China)

On December 25, 2021, Ma Xingrui, the governor of Guangdong, was appointed as the Communist Party Secretary of Xinjiang. China’s strategy in this appointment is to make the most of the expertise of Ma, who turned Shenzhen into a high-tech city, in Xinjiang, as a way of using those fields that are under U.S. sanctions against the U.S.

The state-owned Xinhua news agency announced on December 25 that the Central Committee of the Communist Party of China (CCCPC) had “adjusted the position of Communist Party Secretary of the Xinjiang Uyghur Autonomous Region (XUAR).” According to this announcement, Chen Quanguo, the Party Secretary for XUAR, will be replaced by Ma Xingrui. On the same day, an executive meeting of the Chinese Communist Party, XUAR was held, with the deputy head of the Organization Department of the CCCPC also in attendance, where Chen Quanguo and Ma Xingrui delivered speeches.

One aspect of Ma’s speech that we should make particular note of is the resolve he expressed. ”I will heed the passionate request of General Secretary Xi Jinping,…I pledge that I will never let the hard-won stability of Xinjiang be reversed…To this end, I will promote high-quality economic development with the people at the center.”

Ma Xingrui (62), who holds a doctorate in engineering, is a university professor and a member of the International Academy of Astronautics (IAA). He even had the nickname, “Young Aerospace Marshal.” He served as general manager of China Aerospace Science and Technology Corporation (CASC) from 2007 to March 2013 and held concurrent positions as deputy director of the China Manned Space Program (CMS) and deputy director of the Chinese Lunar Exploration Program (CLEP) from November 2008 to March 2013.

2013 saw a dizzying change in Ma’s position, when in March, he was suddenly appointed to several government positions, including deputy director (vice minister) of the Ministry of Industry and Information Technology, and director of the China National Space Administration (CNSA). Then, in November that year, Xi Jinping suddenly appointed him as deputy party secretary of Guangdong province.

Such personnel changes are extremely unusual.

After concurrently serving as Communist Party Secretary of Shenzhen from 2015 to 2016, Ma was appointed Governor of Guangdong in 2017. His CV in the years until then is far too detailed and complicated, with too many concurrent positions to be listed here.

The most important thing to note about his time in Guangdong is that, in addition to his contribution to Guangdong’s tremendous economic development, Ma further refined the high-tech trend in Shenzhen, which gained it the nickname of “China’s Silicon Valley,” growing it to a level that poses a threat to the United States.

An interesting video on YouTube, called “GDP History of Provinces and Cities in China,” describes how he achieved Guangdong’s remarkable economic growth. This video follows the GDP rankings of China’s provinces, autonomous regions, and municipalities from 1978 to 2020. By the end of the video, you can see that Guangdong has the highest GDP in China (Source: Histodome; posted by individual video creator)

◆ Coinciding with Announcement of “Made in China 2025”

Meanwhile, Xi Jinping, who assumed the office of General Secretary of the Chinese Communist Party on November 15, 2012, selected Shenzhen as the first destination in his tour of the nation in the following month of December. Shenzhen is a region that was developed by Xi Jinping’s father, Xi Zhongxun, who called it a “Special Economic Zone.” After being confined in prison and house arrest for 16 years due to a conspiracy by Deng Xiaoping, Xi Zhongxun devoted himself furiously to his work (described in Xi Jinping, Chichi wo Hametsu Saseta Deng Xiaoping e no Fukushu [Xi Jinping: Revenge on Deng Xiaoping for ruining his father], Homare Endo).

As though making a vow there in Shenzhen, Xi Jinping embarked on the high-tech national strategy, Made in China 2025, immediately on his return to Beijing (described in “Chugoku Seizo 2025” no Shogeki  Xi Jinping ha Nani wo Neratte iru no ka [Impact of “Made in China 2025” What is Xi Jinping aiming at Now?], Homare Endo).

Perhaps Xi Jinping’s decision to parachute Ma Xingrui into Guangdong was an extension of that resolve. This is why the way in which Ma was appointed is so unusual.

On his posting to Xinjiang, Ma remarked that he “will promote high-quality economic development.” What does this mean?

On January 21, 2021, Xinhua-net announced, “Xinjiang’s digital economy grew by 10% from last year and accounts for 26% of Xinjiang’s GDP.” The article states the following.

As such, XUAR is growing rapidly thanks to efforts being made in the digital economy to a surprising degree.

And it does not stop there.

On June 24, 2021, the U.S. Commerce Department added five companies in XUAR that manufacture solar panel materials to its entity list, which restricts imports of products made by those entities, over their alleged involvement in human rights violations, including forced labor and surveillance activities. These five companies will no longer be able to do business with American companies.

China is the world’s largest producer of solar panels, but the U.S. Congress took issue with the fact that most polysilicon, a material used in solar panels, is manufactured in XUAR. In other words, the problem is that the use of forced labor makes it possible for Xinjiang to provide cheap solar panels.

Sichuan and Yunnan, which have abundant water resources and advanced hydroelectric power generation, account for about half of the industrial silicon production in China, and XUAR accounts for 20%.

This is because industrial silicon consumes an enormous amount of electricity, so unless the area is rich in electricity supply in addition to resources, it would be too costly to produce, making it impossible to turn a profit (Yunnan has hundreds of rivers, Sichuan has abundant water resources, including the Yangtze, and Xinjiang has abundant coal reserves and access to the Ili River and other water sources; is also the largest relay point for oil and natural gas in China).

Electricity accounts for 30–40% of the total cost of the industrial silicon production process.

Solar panels made in Xinjiang are cheap because electricity is cheap.

The cost of electricity in Xinjiang, Sichuan, and Yunnan is 5.44 yen (JPY equivalent) per 1 kWh, compared with 10.8 yen in Guangdong and 17.58 yen in Shanghai. The cost varies in various locations in China. That is reflected in the price of solar panels. TEPCO charges about 17 yen per 1 kWh of electricity for commercial use. This is on a par with Shanghai.

Solar panels are being produced in large quantities in Xinjiang due to a focus on polysilicon manufacture.

This means that they can use electric power generated from these solar panels for polysilicon manufacturing, forming a self-propagating production cycle that makes it possible to produce solar panels cheaply.

American newspaper, the Wall Street Journal, reports, ‘About 85% of the panels sold in the U.S. are imported, with many of those made by Chinese companies,’ before going on to say, ‘Targeting China’s solar industry is difficult for Biden administration that also wants to make the U.S. electric grid carbon-free by 2035.’

The WSJ article also conveys the concerns of industry and other parties, writing, ‘The vast majority of solar panels sold globally rely on technology dominated by China… China is the leader in all parts of the supply chain, especially in the production of silicon wafers that are turned into solar cells.’  In other words, the article expressed the suspicion that it may be the United States that will be most adversely affected by putting Chinese solar panel companies on the entity list.

Under the U.S. sanctions, it is presumed that Xi Jinping is trying to overcome the United States’ condemnation of China by developing the economy in XUAR.

This seems to be also in line with “Made in China 2025.” By relying on Ma’s capability, Xi Jinping probably aims to develop XUAR as a base for the digital economy and solar panel production, in much the same way that Shenzhen grew to the level that earned it the title of “China’s Silicon Valley.”

Even without these moves, China has a large land area and has been promoting remote education since the 1990s. With support from the World Bank and other organizations, China has established a system in which people in Yunnan and XUAR can attend lectures at universities in Beijing and Shanghai remotely. They have even been developing a system that will allow attendance from China of lectures delivered at Stanford University.

The need for the digital economy in China is increasing as internet communications have developed and remote work has become more prevalent globally, especially due to the COVID-19 pandemic.

Massive volumes of electricity will be required to make a digital society possible.

With the promotion of clean energy, solar panels are an ideal means to produce that electricity.

In China, the words “West-East Gas Pipeline” and “West-East Electricity Transmission Project” have been advocated in the Great Western Development Strategy since the 1990s. They refer to networks, which started around 2000, that cover the whole of mainland China to transport oil, natural gas, and other energy sources and electricity from Western China to cities on the eastern seaboard where there has been marked economic development. These networks have helped to make up for power shortages and to prevent disruptions to production lines due to power outages. In particular, the starting point of the West–East Gas Pipeline is the Tarim Basin in XUAR.

In a time of calls for clean energy, Xinjiang has abundant electricity generated by solar panels, in addition to its reserves of rare earths. The replacement of the top official in XUAR signifies a strategy in which that abundant electricity will be supplied to the entire Chinese mainland, just like the West-East Gas Pipeline and West-East Electricity Transmission projects.

The U.S. sanctions imposed on solar panel companies in Xinjiang mean a ban on solar panel exports to the United States. For Xi Jinping, the ban on exports to the United States is not a major blow. On the contrary, it will be a good opportunity for China to allocate its electricity to domestic use, to alleviate social concerns caused by power shortages in China. That this is China’s national strategy can be seen from Ma Xingrui’s posting to Xinjiang.

For domestic consumption, the likelihood of accusations from the United States that China is using electricity from forced labor will be nil. On the contrary, there appears to be a simultaneous calculation that, if the Uighur people are engaged in the production of clean energy and promoting the digital economy, it will lead to less criticism from the world and bring economic prosperity to Xinjiang, which will in turn alleviate rebellions, such as terrorist attacks, that tend to be instigated by Muslims.

The People’s Daily, the official newspaper of the Chinese Communist Party (CCP) reported that, on 8 September 2021, China’s Foreign Minister Wang Yi held talks with Afghanistan’s Foreign Minister and proposed the resumption of Xinjiang–Afghanistan freight trains, and that such services actually started on November 20. This move can be interpreted as a China wanting to send a message that, while the United States failed to control Islamic Afghanistan, China has proved itself to have superior ability to control than the United States by growing the economies of Afghanistan and the Uyghur people, who are also Muslim.

Xi Jinping aims to draw the economy into the U.S.-China contest for hegemony and to secure victory for China.

Ordinarily, such personnel changes would be announced around the time of the 20th National Congress of the Chinese Communist Party (NCCCP) in the autumn of 2022, but Ma’s appointment was announced ahead of that schedule. It is presumed that the early announcement aimed to avoid social uncertainty caused by power outages and the real estate development industry, as well as to dispel mistrust of the Chinese government caused by failure to prevent a resurgence of COVID-19 infections due to a lack of control by the Xian government.

As the curtain opens in 2022, we must be sure not to miss the next developments.