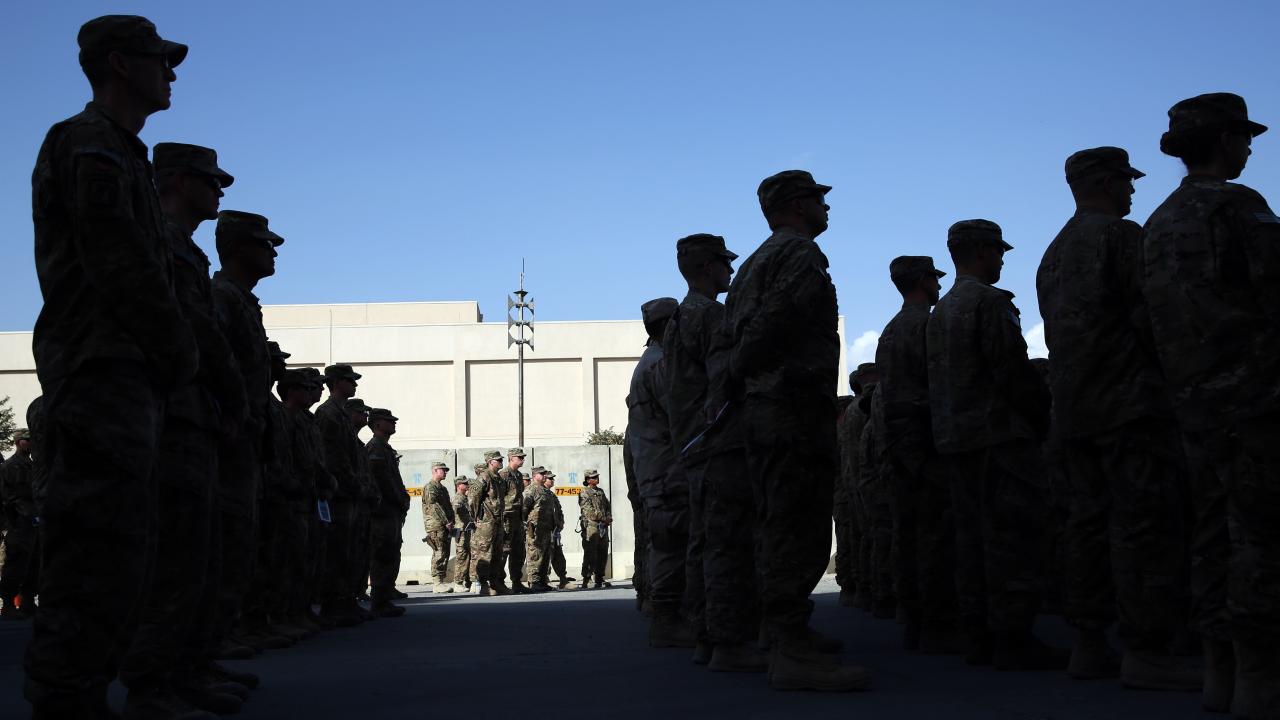 U.S. service members stand during a ceremony on the thirteenth anniversary of the 9/11 terrorist attacks in front of the World Trade Center Memorial, at Bagram Airfield, Afghanistan Thursday, Sept. 11, 2014. (AP Photo/Massoud Hossaini)

In China, people are interested in security under the Taliban, and media reports are based on statements by U.S. Republican Congress members and the Pentagon that the U.S. military’s abandonment of Bagram Base caused the spread of terrorism. This article will find out the truth by referring to the original English text (include the Japanese version).

◆Reports in China about the U.S. Abandonment of Bagram Air Base

In the midday news on August 29, CCTV International, the China Central Television under the control of the Communist Party of China, aired a special program under the theme of <U.S. Republican Congress Members Accuse Biden of Responsibility for the Kabul Airport Bombing>.

XINHUANET, the online edition of Xinhua News Agency, which is the news agency run by the Chinese government, also reported U.S. Republican Congress members’ accusation of Biden’s poor and irresponsible withdrawal order under the headline <Did the Abandonment of the Air Base Cause Tragedy? Biden Says “There Are No Problems with the Afghan Withdrawal Roadmap”>.

Both reports name several Republican members of the U.S. Congress, including Mr. Cruz.

There are various other reports as well, and generally speaking, the following are reported in China. Bagram Air Base near Kabul is the largest U.S. military base in Afghanistan. This base serves as a base for U.S. antiterrorist activities, and has a prison that can accommodate several thousand criminals.

The summary is generally as above but, just in case, let’s check the original information in English or its Japanese version to see if the Chinese reports are correct.

◆Original Information (in English and Its Japanese Information) from the U.S. Government or the Media

First, let’s take a look at what Senator Cruz said.

A Newsweek article dated August 28 has details under the heading “Ted Cruz Says ‘Political’ Decision to Close Bagram Air Base Was ‘Catastrophic’”. This article also has a tweet from Senator Cruz’s Twitter account. Check it out if you are interested.

As a matter of fact, AP NEWS reported how the U.S. military left Bagram Air Base secretly by the morning of July 2 without notifying anyone under the heading “US left Afghanistan airfield at night, didn’t tell new commander.” It generally says as follows:

— According to Afghan military officials, the U.S. left Afghanistan’s Bagram Air Base by shutting off the electricity and slipping away in the night. The Afghanistan (government) army showed off the sprawling air base Monday (July 2), providing a rare first glimpse of what had been the epicenter of America’s war to unseat the Taliban and hunt down al-Qaida, perpetrators of the 9/11 attacks on America. […] “We (heard) some rumor that the Americans had left Bagram … and finally by seven o’clock in the morning, we understood that it was confirmed that they had already left Bagram,” Gen. Mir Asadullah Kohistani, Bagram’s new commander said. […] U.S. military spokesman Col. Sonny Leggett said the handover of the many bases had been in process soon after President Joe Biden’s mid-April announcement that America was withdrawing the last of its forces. Leggett said in the statement that they had coordinated their departures with Afghanistan’s leaders. […] Afghan military officials said the U.S. called from the Kabul airport and said “we are here at the airport in Kabul,” and insisted the Afghan National Security and Defense Force could hold on to the heavily fortified base despite a string of Taliban wins on the battlefield. The airfield also includes a prison with about 5,000 prisoners, many of them allegedly Taliban. In just the last two days, on the other hand, hundreds of Afghan soldiers fled across the border into Tajikistan rather than fight the insurgents (the Taliban). (Citation ends here)

Thus, the Taliban won an overwhelming victory. On August 27, a press briefing by the U.S. Department of Defense (Pentagon) explained how many of the prisoners were ISIS-K and how they were released into society. ISIS-K is a faction of the terrorist organization ISIS, which emerged in Syria and Iraq. “K” was derived from “Khprasan,” the name of the area including Afghanistan and Pakistan.

The below is a question and an answer exchange between a reporter and Pentagon Press Secretary Kirby:

Reporter: How many ISIS-K prisoners were left at Bagram and are believed to have been released from the prison there? And why weren’t they removed before the U.S. pulled out, to some place like Gitmo? (Author’s note: Gitmo is a detention camp operated by the joint task force at Guantanamo Bay Naval Base on the coast of Guantánamo Bay in Cuba to intern terrorist criminals.)

Press Secretary Kirby: Well — well, I — I don’t know the exact number. Clearly, it’s in the thousands, when you — when you — when you consider both prisons, because both of them were taken over by the Taliban and emptied, but I — I couldn’t give you a precise figure. And, as for emptying out, remember — I mean, we were turning things over to Afghan National Security Forces. That was part of the retrograde process. And so they did have responsibility for those prisons and the bases at which those prisons were located. And, of course, as the Taliban advanced, the — the — we didn’t see the level of resistance by the Afghans to hold some territory, some bases. But all of those responsibilities were turned over to the Afghan government, in accordance with the retrograde plan back from April (Author’s note: This is equivalent to saying “We are not responsible and Biden, who decided the retrograde plan, and the Afghan government are responsible because we did everything in accordance with the roadmap decided by Biden in April”).

On the other hand, CNN’s information in English and its Japanese version dated August 25 say that several hundred members of ISIS-K may have escaped from the prison, which is considerably different from what the Pentagon Press Secretary said. According to officials in the previous Afghan government, there were approximately 5,000 inmates including members of the Taliban, al-Qaeda, and ISIS, as well as ordinary criminals, at the Bagram prison as of July.

Importantly, President Biden said on August 24 “ISIS-K is seeking to target the airport and attack both U.S. and allied forces and innocent civilians.” This means Biden knew in advance that terrorist attacks would occur.

As there are too many pieces of information in English generally supporting Chinese news reports to pick up all of them, it is understandable that Senator Cruz accused Biden of “the ‘catastrophic’ decision to abandon the Bagram Air Base.”

◆Terrorist Groups Spread around the World

The reason why I took up this issue here is that there is a risk that terrorist groups will spread throughout the world, including Japan.

Whether breaking out or having been released, the irresponsible abandonment of Bagram Air Base may have resulted in unleashing terrorist groups in Afghanistan who flew from the Kabul airport to the rest of the world in the guise of Afghan civilians as refugees, or went into the mountains and fled to neighboring Pakistan, Tajikistan, Turkmenistan, or Iran.

The world is, therefore, in danger of being exposed to terrorism again.

That is not all.

It should be noted that the threat of another major terrorist explosion is imminent before the U.S. troops completely leave the Kabul airport.

Of course, I sincerely hope nothing will happen, but there may be a major terrorist attack by today (August 30) or tomorrow (August 31). The world should be alert.

This article is an English translation of the article on August 30th.