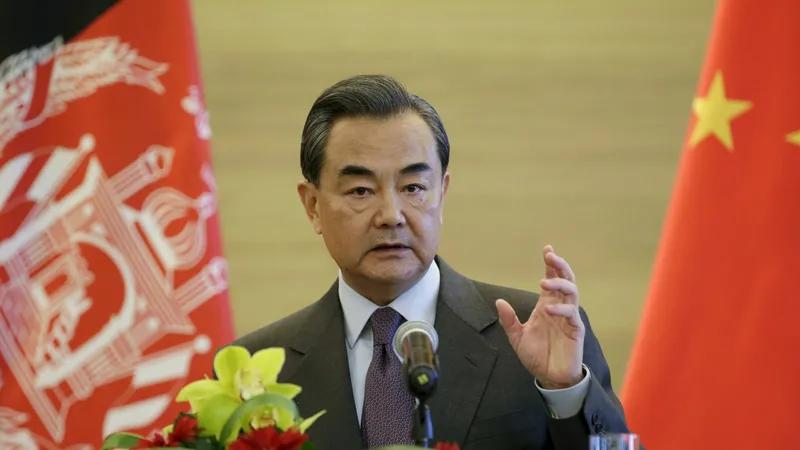 Chinese call Afghans “a poor man lying on a gold mine.” One reason why China pledged economic cooperation with the Taliban even before the Taliban’s victory is underground resources in Afghanistan. Let’s take a look at the past and the current situations.

◆Underground Resources in Afghanistan in Reality

It is said that underground resources worth 1 trillion to 3 trillion dollars are left buried in Afghanistan, and the report describes this situation in the phrase “a poor man lying on a gold mine.”

Condensate is a light liquid hydrocarbon that condenses and separates on the surface of the earth when natural gas is extracted, and also called natural gas condensate (liquid at ordinary temperature and normal pressure).

There is no mention of rare metal reserves such as nickel, lithium, beryllium, and palladium, probably because they have not been explored yet, but the resources mentioned are all fascinating to China. Although China is a global producer of rare metals, demand for rare metals is increasing as a strategic material for U.S. and Chinese hegemony.

The report also includes a map of the distribution of underground resources.

Since it is written in Chinese, I translated it into Japanese as below. 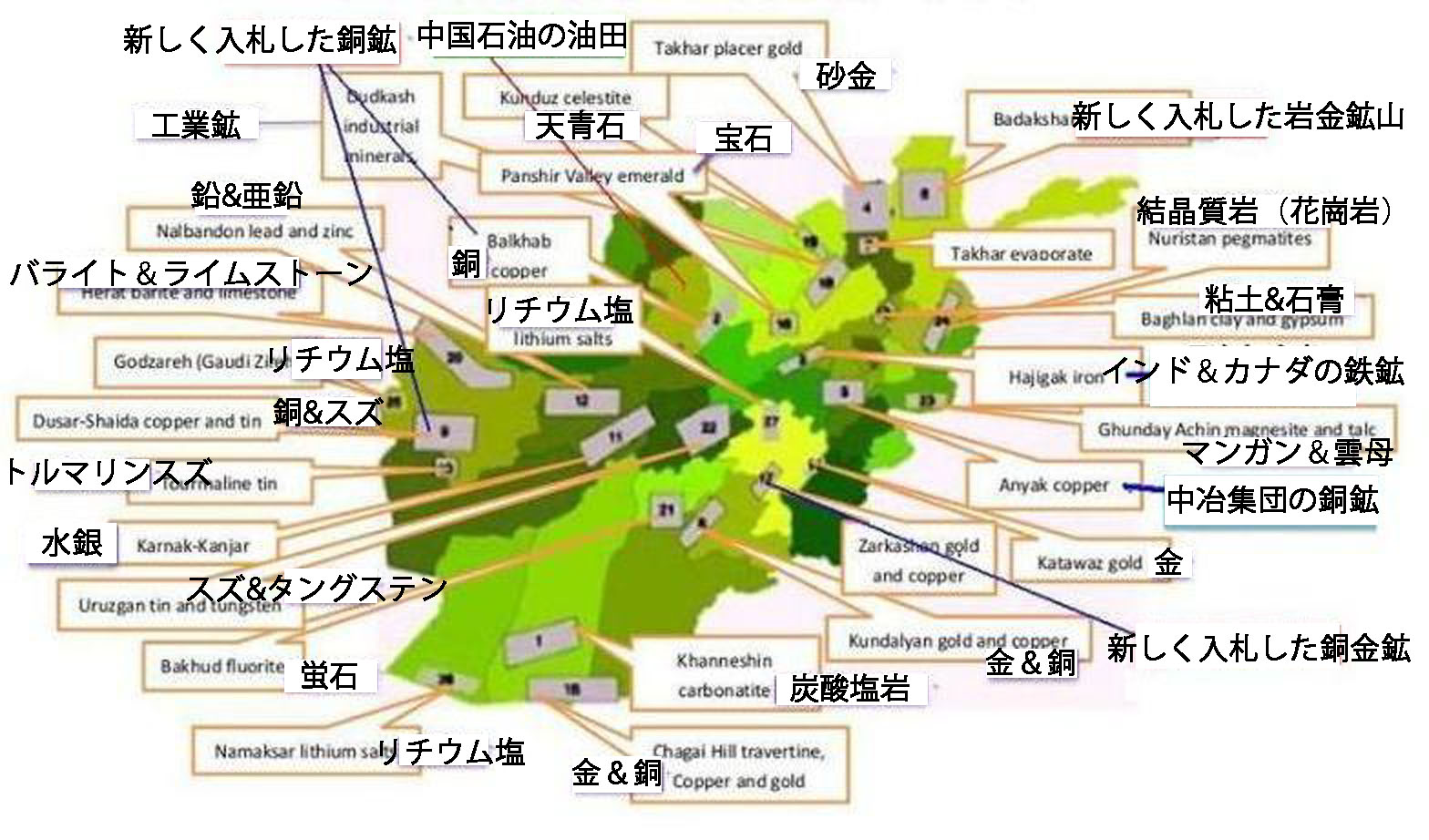 In Figure 2, “Newly” in “Newly bid” represents the time that the distribution map above was created, and the report does not mention the time when this distribution map was created. It is presumed that this map is based on the results of surveys conducted by the United States about 10 years ago.

Chinese companies shown here include PetroChina and China Metallurgical Group, which I think were added by China itself. The following provides descriptions of copper mines.

◆China Captured One of Afghanistan’s Largest Copper Mines Early on

Regarding copper mines, when China Metallurgical Group Corporation (MCC) and Jiangxi Copper Company formed a new consortium in 2008, the Afghan government had a great expectation that this consortium would support the economic development of Afghanistan.

As a result, the Afghan government granted China a mining concession for 30 years from 2008 for the Mes Aynak copper mine (the world’s second largest undeveloped copper deposit), which is the largest copper mine in Afghanistan, but development was stagnant due to many conflicts.

On June 2, 2016, MCC was merged into China Minmetals Corporation.

This is in line with the strategic realignment on December 8, 2015, by the State Council’s State-owned Assets Supervision and Administration Commission to create world-class companies. Minmetals was actually selected as a Fortune 500 companies. Minmetals became a giant company with expertise in all aspects of the supply chain from exploration to advanced processing, and their contract with the Afghan government was renewed in 2016. The contract not only promised payment of generous insurance and royalties to the Afghan government, but also promised the construction of urgently needed infrastructure, including railways and power plants.

The above map of underground resource distribution and development status in Afghanistan shown in the report by the Ministry of Commerce of China, et. al. does not have the name “Minmetals” but “China Metallurgical Group,” indicating that this map is based on information at least in 2016 or earlier.

Although this was not put into practice due to prolonged conflicts, a turning point came in mid-2016.

◆The Taliban and China Starts Deal in 2016

A shocking incident for the Taliban occurred in 2016.

On May 21, 2016, the Taliban’s then supreme leader Mullah Ayatollah Akhtar Mansour was killed by the U.S. military. Former President Obama ordered the killing. This eliminated the chance for the Taliban to be engaged in peace negotiations, and the Taliban’s delegation visited Beijing two months later, from July 18 to 22, to ask China for help.

They complained about the humiliation of being occupied by foreign troops and urged China to discuss this at an international conference.

in exchange for China supporting and speaking for the Taliban in the international community. There was, however, no official announcement from China in 2016.

This means that these were going on in secrecy, and the Taliban maintained that they gave China permission to resume a 3-billion-dollar mining project at that time, while the Afghan government derided saying that it was just an extremist group’s tall tale. In those days, the area where the Mes Aynak copper mine is located was apparently ruled by the Taliban.

The question is how to transport underground resources, even if they are mined.

Pakistan and Afghanistan are covered with mountains, and the Belt and Road Initiative established infrastructure connecting with Pakistan to remove logistics difficulties so that the area is now called the Pakistan corridor. However, infrastructure investment has not been made in Afghanistan because the country was still in the midst of conflicts.

When the 30-year mining concession for the Mes Aynak copper mine was granted in 2008, MCC was trying to give shape to a proposal to build a south-north railway in Afghanistan.

For example, an “Agreement [was] signed for north-south corridor” in September 2010, and Afghanistan’s Minister of Mines Wahidullah Shahrani and China Metallurgical Group concluded an agreement on a detailed investigation for a railway connecting Kabul, Uzbekistan, and Pakistan.

There was also news in October 2011 that “Construction on Kabul-Torkham Railway to Start Soon, Ministry of Mines Says,” and all of them had to wait for behind-the-scenes negotiations between the Taliban and the Xi Jinping administration in 2016.

The behind-the-scenes negotiations came to the surface when the Taliban delegation and Foreign Minister Wang Yi met in Tianjin on July 28 this year, as I wrote in my article dated August 15 <The Taliban Reverses the U.S.-China Power Relationship>.

It is a mistake to think that China suddenly approached the Taliban at that time.

In the development of underground resources, particularly the mining of copper, China has simply been waiting for the time to come for many years very carefully.

In fact, when the Taliban’s military advance began in mid-August, whereas the embassies of many NATO countries, including the American Embassy, hurried to withdraw from Afghanistan, the Chinese and Russian embassies refused to move.

That is because they were confident that they would be protected by the Taliban.

Few people pay attention to this fact, but this is the best evidence of the fact that China is behind the Taliban.

◆Another Condition for Exchange in 2016?

From the Taliban’s visit to China in 2016 to the infrastructure deals in the same year, China has not disclosed anything about its contact with the Taliban. Therefore, the following is my best guess.

If you look closely at developments in China, you may find that terrorist activities in China have decreased rapidly since around 2016.

Of course, this was the year when Xi Jinping appointed Chen Quanguo to the post of Secretary of the Xinjiang Uyghur Autonomous Region and established a system to closely monitor activities of the Uyghur people. These measures may have borne fruit, or security may have been reinforced since around 2016 as facial recognition and monitoring systems have been deployed.

However, I cannot help but suspect that there was contact with the Taliban in 2016 behind the fact that terrorist activities by Islamic extremist groups, which had flourished until 2014, suddenly disappeared.

In other words, I suspect that China might have demanded a condition for exchange from the Taliban that the Taliban must not support the Eastern Turkistan Islamic Movement in return for China’s support of the Taliban. That is why I had to write my article dated on August 18 <The U.S.-China Battle for Suppression of the Resurrection of the Taliban Administration’s Terrorism: The Irony of China and Russia Threatening Not to Tolerate Terrorism>.

Since 2016, China has focused on the peace talks highlighting the Taliban. I can never deny an aspect that Trump took advantage of it.

This article has been too long. I will discuss this issue again separately.

This article is an English translation of the article on August 20th.