言語別アーカイブ
基本操作
The Impact of COVID-19 on the Chinese Economy in 2020 is a Double-Edged Sword; Will It Lead to Economic Decline or Encourage Reform?
孫 啓明 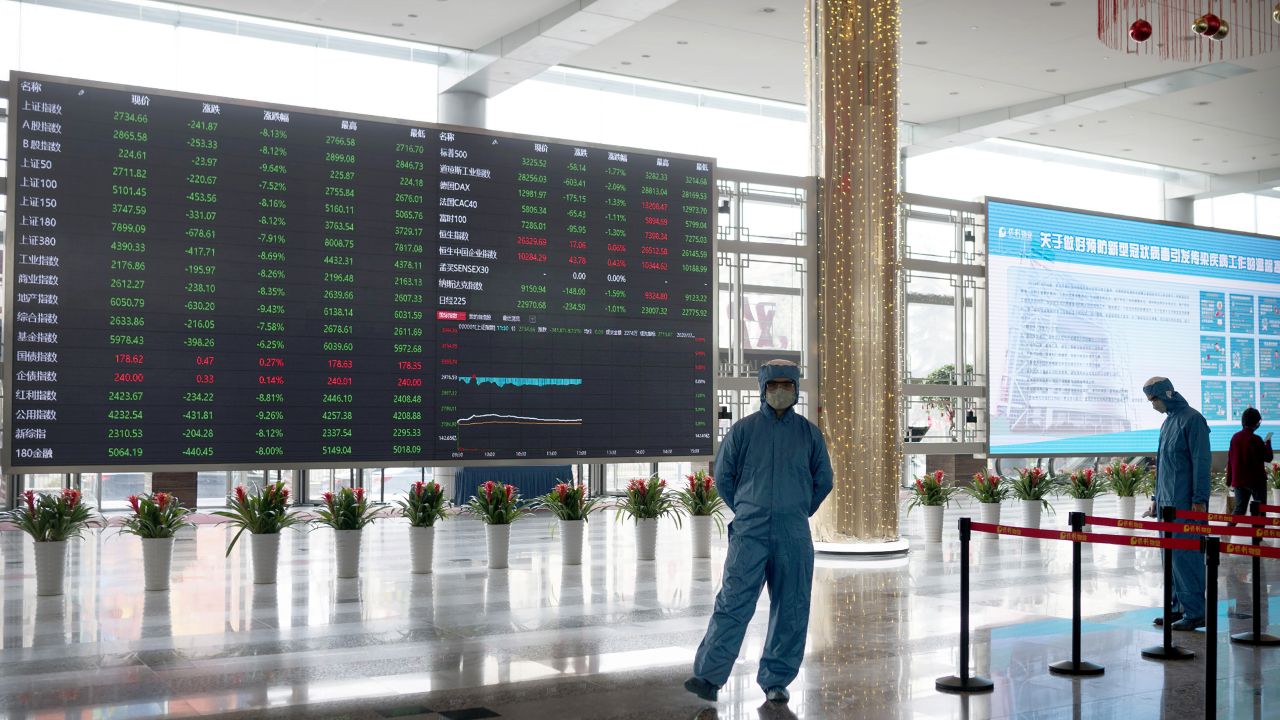 Workers wearing protective suits stand near an electronic display board in the lobby of the Shanghai Stock Exchange building in Shanghai, Monday, Feb. 3, 2020. The Shanghai Composite index tumbled 8.7% Monday then rebounded slightly as Chinese regulators moved to stabilize markets reopening from a prolonged national holiday despite a rising death toll from a new virus that has spread to more than 20 countries. （Photo provided by：AP/アフロ）

The Chinese economy experienced its worst year in the past decade in 2019. It was expected that 2020 would be the year that the economy would recover, but the overwhelming spread of COVID-19 at the beginning of the year as a black swan event has been like adding insult to injury. On January 30, 2020, Asian stocks experienced their own “Black Tuesday” when the offshore Chinese yuan fell to around 7 against the US dollar. US stock exchanges plunged, with the Dow Jones Industrial Average plummeting more than 600 points (2%), the biggest fall since August 26, 2019, and 3 major US stock indexes also declined sharply. Now, when downward pressure on the world economy is growing stronger, China’s GDP growth rate for the first half of 2020 could turn out to be only at around 5% and is not be expected to rise to 6% for the full year. To what extent will the spread of COVID-19 have an impact on the Chinese economy? To keep up with the times, can China end its outdated industries, use that as an opportunity to upgrade other industries, reform traditional manufacturing, and develop new modern industries? What approach should it take to that end? I would like to have a simple discussion on this matter in the article below.

However, if China cannot contain the virus and it spreads, there is the possibility that it will have a deep impact. On January 31, the World Health Organization (WHO) announced that the spread of COVID-19 fell under the conditions for a Public Health Emergency of International Concern (PHEIC). China as the world’s second largest economy was designated as the source of the outbreak, and if the restrictions on tourism and trade to China should expand, key countries around the world could take it to mean China’s economy is closing up, which would have a serious impact on all trade, supply chains, orders, imports and exports, distribution, migrating populations, and energy prices under extreme circumstances. Should the situation deteriorate to that point, it would not only have a serious effect on the Chinese economy, but could also lead to a global recession.

If China can use its administrative capabilities to ensure that no unexpected incidents occur, the spread of COVID-19 can be contained within two months and there should be no changes to China’s long-term macroeconomic growth. I am personally judging the situation with this optimistic approach.

On the structure of China’s industries, if there is a positive side, there is also a negative side. After all, this black swan event will have different long-term and short-term effects. When looking at the short term, offline businesses in the catering, travel, transportation, and accommodation facility industries will sustain a significant impact. When looking at the long term, it can be said that China still has a monumental chance to upgrade its industries. For instance, smart city construction, smart traffic management, building smart medical systems, telemedicine, medical-use robots, smart nursing, smart agriculture, digital industry supply chains, smart logistics, the emergency disaster storage industry, and digital information traceability. To upgrade traditional manufacturing industries, China will need to achieve more inclusive digitalization and conversion to smart technology, and build a system management platform that can encompass a wider area. China may even be preparing disaster prevention and prediction functions applying artificial intelligence. The hierarchy problem in medicine and issues on how to distribute medical resources more effectively will be brought to light. With the spread of COVID-19, we may see many kinds of industrial reform as it greatly influences the structure of meals and how people eat. Industries for fitness, health management, online classes, online gaming, and video distribution are likely to be segmented further. Blockchain technology especially could be more widely applied to industries. In my opinion, the spread of COVID-19 will have a significant detrimental effect on the Chinese economy, however from a long-term perspective, this setback will also provide a new stimulus for reforms and upgrades. It will become a new starting point, and has the potential to encourage further sophistication in China’s industrial structures.

Looking at the long term, economic crises and recessions are a good opportunity to force adjustments on industrial structure. It is a chance for China to escape the middle-income trap and have its manufacturing industries join the world’s high-end industries. Under normal circumstances, there are three points of criteria on whether countries are considered to be Middle Income Countries (MICs) in terms of economy:

China already fulfills these three criteria. In other words, it has already joined the ranks of the MICs.

When looking back on recent history, there are many countries that have become MICs. More than 100 countries such as Brazil, Venezuela, and Malaysia have fulfilled the criteria, but even if they escape the middle-income trap once, most of them fall back into it. There are only a handful of countries that have completely escaped the middle-income trap and are now advanced economies, including Japan and South Korea. The key factors in escaping the trap were whether it was possible for these countries to have constant technological innovation, and whether they could maintain sophisticated industrial structures. Many of the countries that cannot escape the middle-income trap mainly rely too heavily on short-term GDP revenue such as natural resources or tourism industries. However, the main reason why countries like Japan and South Korea were able to thoroughly escape the trap and maintain advanced economic standards for a long period of time is because they had constant scientific research and technological innovation, and were able to continue maintaining their industries at a comparatively advanced level on a global stage.

As we can see when looking back in history, progress toward industrial structure and technological structure applies the rules of strength in adversity. In other words, in times of emergency or economic crisis, new industries are developed stronger when they borrow the power of markets and force the elimination of outdated industries. Just like with the spread of SARS and the 2008 financial crisis, the spread of COVID-19 has the potential for China to progress with technology and use the opportunity to facilitate adjustments to industrial structuring. That being said, with the opportunities opened up by the spread of COVID-19, China should build the world’s cutting-edge industrial structures with blockchain-based digital economy industries, develop online economies, encourage new industrial forms such as smart logistics, smart agriculture, and smart working-from-home setups that use AI-powered robots, with the Chinese economy moving ahead of the curve.