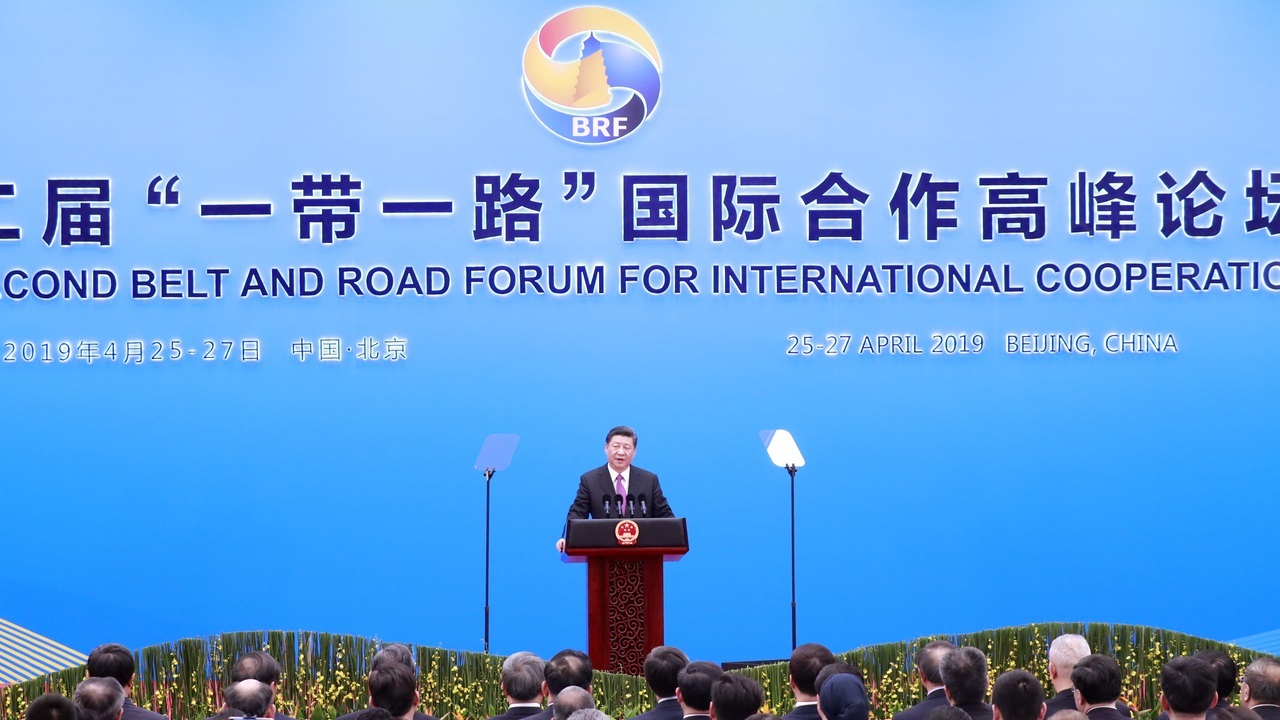 China’s “One Belt One Road Initiative (OBOR)” is perhaps the most popular and the object of the most severe criticism among China’s external strategies employed to date.

As everyone knows, OBOR is a huge project that essentially aims to establish an economic community. The Chinese government trumpets the economic benefits of OBOR. However, it has led to increasing international concern over the negative impacts that may arise from the project.

OBOR has attracted criticism because the natural environment and ecosystems have been damaged by related construction. OBOR has also created debt problems. Many of the countries along the OBOR-targeted area are developing countries that need to establish an infrastructure for their economic growth. Ironically, if a developing country joins OBOR, the country would have to struggle to pay off its huge loans from China and run into financial trouble. At worst, the country may have to give up national sovereignty to receive debt forgiveness. For example, in South Asia, Sri Lanka’s government was eventually forced to hand over the rights to operate the Port of Hambantota, which was funded by Chinese capital, to a Chinese state-owned company for ninety-nine years. Likewise, Pakistan will hand over the Gwadar Port to China on a 43-year lease. In Southeast Asia, Cambodia also handed over the exclusive rights to use the Port of Koh Kong to China on a 99-year lease.

In 2006, Christopher J. Pehrson named China’s activities to obtain exclusive rights to use geopolitically important ports for its expansion of power throughout the world as the “String of Pearls” policy. Although the policy is explained as a measure to ensure the security of routes for the maritime transport of energy, it is facing the opposition of countries who perceive it is a threat. For instance, India sees it as “an offshore project to encircle India”. The international community has reacted skeptically to OBOR.

At a Senate Intelligence Committee hearing on January 29, 2019, the U.S. Director of National Intelligence, Dan Coats, warned that the One Belt One Road Initiative is not just a project for infrastructure development but has geopolitical and military implications for the areas concerned in a strategic sense.

On May 2 of the same year, the Pentagon published an annual report to Congress: Military and Security Developments Involving the People’s Republic of China 2019. The report discussed the current status and development of OBOR. Citing an example of a Chinese military base in Djibouti in Africa, the report suggests that China has a military intention, a hidden intention behind OBOR whereby China plans to construct military bases in overseas countries for the purpose of construction and the security of labor forces, with an aim to increase its military presence.

In April 2019, prior to the release of this report, the DIA (Defense Intelligence Agency) of the U.S. published a report titled “The Military Power of China”. While OBOR is said to be aiming at economic development and trade promotion, the core part of OBOR is transportation, and the People’s Liberation Army of China will receive the benefits of using an improved transportation system.

Think tanks have also raised an alarm over OBOR. For example, Daniel Kliman, Senior Fellow and Director of the Center for a New American Security in the U.S., stated in a USCC (US-China Economic and Security Review Commission) hearing on January 25, 2018 that China may need military bases in overseas countries to meet the needs of OBOR and maritime transportation, and thus the Liberation Army may more actively encourage enhancement of the capacity of overseas military forces.

At the moment, there is no evidence to prove what strategic intention China has behind OBOR. However, OBOR-related construction and staff have actually been threatened. In Pakistan, Chinese staff involved in OBOR-related projects were attacked by a local armed group, the Balochi Liberation Army, causing casualties.

Moreover, with regard to the security aspect of OBOR, the involvement of private security companies should also be noted. In China, the security industry has expanded rapidly as the economy has grown. According to Asia Times, there are about 5,000 security companies with about five million employees. On the other hand, OBOR demands the provision of security services to meet the above-mentioned security demand. From a national policy perspective, those related to the Chinese government have argued that the development of the security industry must be supported for the protection of OBOR. Major General ZHU Chenghu, a professor at the PLA National Defense University, is one of such individuals. In fact, the above-mentioned Asia Times points out that many former Liberation Army soldiers are employed by Chinese security companies.

The Taiwanese government has expressed that it has no objection to OBOR. By contrast, China denies the conventional sovereignty of Taiwan, maintaining a confrontational stance toward Taiwan. So Taiwan needs to look at OBOR from a viewpoint different from other countries.

China employs carrot-and-stick policies toward Taiwan. China presses Taiwan by aligning the sights of more than 1,000 missiles toward Taiwan, having military aircraft pilots fly around the Taiwanese territory, and having a battleship circle around the Taiwanese territory. On the other hand, for the sake of Taiwanese people who do business in China, China prepared a conciliatory “31 Preferential Measures for Taiwan” at the end of February 2019.

With this relationship in mind, the Taiwanese government sees OBOR as not only a mere grand plan for development of infrastructure and trade promotion but also as the measures for unification with Taiwan (so-called unified front). Beijing may attract Taiwanese companies with economic benefits arising from OBOR and win them over to China’s side. Of course, opportunities to engage in OBOR projects are only offered to those who support national unification between China and Taiwan.

High-level Chinese government officials and Chinese operatives in Taiwan underscore the benefits of OBOR to Taiwanese companies who do business in China and Taiwan and encourage them to join OBOR. For example, Yu Zhengsheng, chairman of the Chinese People’s Political Consultative Conference (CPPCC) at the time, expressly stated that China and Taiwan should work together for OBOR, and the Taiwan Affairs Office of the State Council also promotes participation in OBOR.

In fact, even certain media in Taiwan do not hesitate to seek support for OBOR upon the request of China. For example, on May 13, 2019, China Times reported in an article titled “OBOR welcomes Taiwanese companies’ strength (tentative translation)” that OBOR will be a significant opportunity for future development for Taiwanese companies doing business in China.

If more and more Taiwanese companies participate in OBOR, the Taiwanese government would have to consider the above-mentioned overseas military bases of PLA and security companies involved in OBOR projects from not only a security perspective but also China’s united front perspective.

Quite a few OBOR projects take place in unstable areas with political or social risks. As a result, Taiwanese people involved in OBOR may also be exposed to such risks. Moreover, former PLA soldiers who work for Chinese security companies, as mentioned above, may be able to connect with Taiwanese people more easily compared to active soldiers in uniform. If Beijing expects security companies to serve for a “sacred mission” of national unification, they can even be a force to fight for unification.

Taiwan has a limited number of official embassies and consular offices in overseas countries because very few countries have a diplomatic relationship with Taiwan. The number of resident offices (representative office) cannot compare with that of the overseas institutions of China. In the event of terrorism or an attack, Taiwanese people may have to run to the nearest Chinese military base or security company for protection. The international community may see this as “Mother country China kindly protects Taiwanese fellows”, which would harm the image of the Taiwanese government.

Not so long ago, in September 2018, a Taiwanese veteran diplomat in Japan committed suicide. On the internet, someone wrote “Chinese tourists left behind in the typhoon-affected Kansai Airport were evacuated using a bus arranged by the Osaka-based consular office”. The then representative of the Taipei Economic and Cultural Office in Osaka, Su Chii-cherng, faced a barrage of criticism as the “Taiwanese government’s support for Taiwanese tourists was not sufficient”. The gap in the handling of fellow citizens between Taiwan and China, as well as the subsequent blame from domestic society, must have constituted unimaginable pressure for Mr. Su.

Comparing the cross-strait parties, there is nothing less than a unified front. In a sense, OBOR can be defined as the front line of a fight for unification. Going forward, the Taiwanese government should take OBOR issues into serious consideration when examining their measures against China (so-called cross-strait measures).