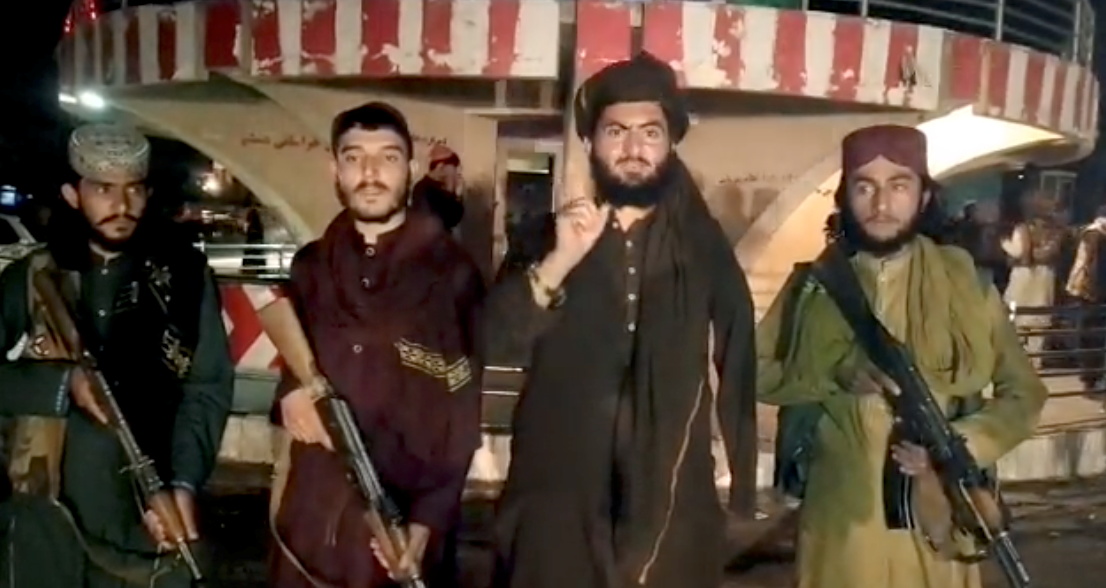 Taliban fighters record a message after seizing Pul-e- Khumri, capital of Baghlan province, Afghanistan, in this still image taken from a social media video, uploaded August 10, 2021. Taliban Handout via REUTERS THIS IMAGE HAS BEEN SUPPLIED BY A THIRD PARTY

It will only be a matter of time before the Taliban takes power in Afghanistan. At the same time that the United States announced the withdrawal of its troops from Afghanistan, China and the Taliban quickly approached each other. Xi Jinping will not accept the revival of Al-Qaeda due to the Uyghur issue in addition to the reinforcement of the Belt and Road Initiative. If that is the case, China will accomplish what the United States failed to do, which will lead to China gaining global momentum.

The Taliban is an anti-government armed force in Afghanistan that has been at odds with the U.S.-backed Afghan government. After the announcement of the U.S. troops’ withdrawal from Afghanistan, however, the Taliban expanded its power in an instant, and will soon gain power in Afghanistan. 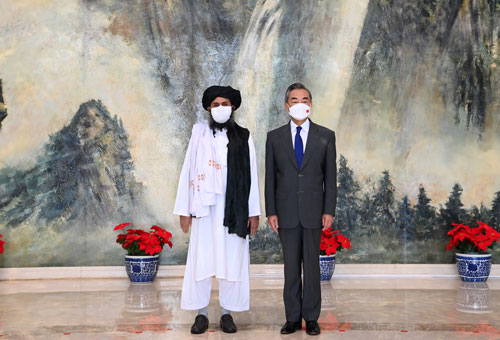 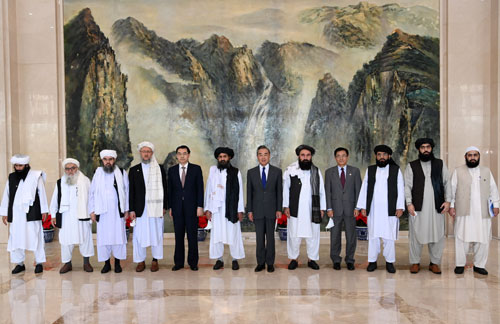 Wang Yi said at this meeting:

— I appreciate the opportunity to visit China. China has always been a reliable friend of the Afghan people and China’s just and positive role has been significant in Afghanistan’s peace and reconciliation process. The Afghan Taliban has the utmost sincerity to work toward and realize peace. It stands ready to work with other parties to establish a political framework in Afghanistan that is broadly-based, inclusive, and accepted by the entire Afghan people and to protect human rights, especially the rights of women and children. […] The Afghan Taliban hopes that China will play a bigger role in future reconstruction and economic development. The Afghan Taliban will also make its own efforts toward fostering an enabling investment environment.

In other words, the Taliban wants China to support and invest in Afghanistan’s economic recovery.

The U.S. Withdrawal from Afghanistan is a Precious Opportunity for Xi Jinping

After the 9.11 incident occurred on September 11, 2001, the United States started to lead the invasion of Afghanistan in December of the same year. The Taliban, which until then had occupied about three quarters of Afghanistan, was forced to withdraw because the United States supported the Afghan government. The Afghan government was also supported by the NATO-led International Security Assistance Force (ISAF) in addition to the U.S. military, which means an endless conflict with the Taliban and numerous victims.

Biden said that the United States “spent more than a trillion dollars and lost thousands of its own troops” to govern Afghanistan for twenty years.

However, it was the Trump administration that negotiated peace with the Taliban and reached a peace agreement on February 29, 2020. Under the peace agreement, the United States would reduce the number of U.S. troops stationed in Afghanistan within 135 days (by mid-June 2020) from 12,000 to 8,600 soldiers, the Taliban would crack down on extremists to prevent Afghanistan from becoming a base for terrorist attacks against the United States and other countries, and the U.S. troops would withdraw completely in the spring of 2021 if the commitments were fulfilled.

Although it is hard to comment accurately because the situation is changing from time to time, the power map at least as of August 13 is as follows. 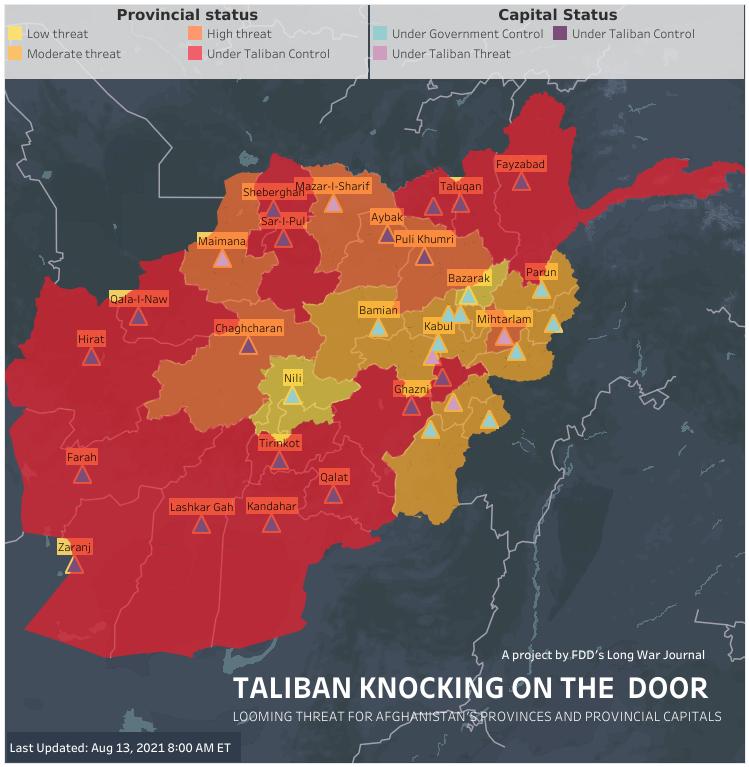 It is only a matter of time before the Taliban administration is born.

China should expect that the world will belong to them if Afghanistan is taken over by the Taliban, which is pro-China and anti-U.S.

It may be said that this is a rare opportunity for Xi Jinping to encounter the timing of being at the top of the nation in this age.

It is well known that China has forged closer ties with Pakistan, calling it the Pakistan corridor, and connected the corridor all the way to the west of the Belt and Road Initiative. In its tie to Iran and other Middle Eastern countries, however, there was only one incomplete area. This is the Afghanistan from which the U.S. troops are withdrawing. Because the conflict had been going on there for a long time, it did not have leeway to trade with neighboring countries.

If Afghanistan is ruled by the pro-China Taliban, however, it would be completely taken over by China and incorporated into the concept of the Belt and Road Initiative as shown in the map below. The Taliban’s diplomatic delegation, which visited China on July 28, promised Chinese Foreign Minister Wang Yi investment for that purpose.

The five Central Asian countries, circled in red, are the countries that China rushed to enter into diplomatic relations with in the week after the collapse of the Soviet Union on December 26, 1991. As well as being oil pipeline partners, they are important members of the Shanghai Cooperation Organization, a security framework that includes Russia.

The countries in the Middle East circled in green are the countries that Foreign Minister Wang Yi visited as mentioned in my article dated March 31, <Wang Yi’s Visit to Middle East Aims at “Energy Security” and “Undermining the Position of the Dollar as the Key Currency”>.

Xi Jinping would be pleased that the west from Beijing will belong to China if the Afghan Taliban fills that vacant area.

Looking to the north, President Putin said Russia and China are closer than ever in history. Mongolia, sandwiched between Russia and China, cannot be left without being pro-China.

The Belt and Road economic bloc initiative is becoming more and more gigantic.

On the other hand, Uyghurs in the Xinjiang Uyghur Autonomous Region believe in Islam, and many of them are Sunnis. A majority of Afghan are also Sunnis. So far, there have been Uyghurs fleeing from Xinjiang to Afghanistan, and there have been constant rumors that they were taken into extremist groups. Therefore, it is very convenient for China, which has been strengthening its suppression on Uyghur under the pretext of counterterrorism, to make friends with the Taliban.

This is because, as we shall see later, the Taliban has pledged in the peace agreement that “we will not make Afghanistan a hotbed of terrorism.”

The Crossroads of Hegemony by the United States and China: Is China the Only Country That Can Restrain the Resurgence of Al-Qaeda?

On the other hand, in the meeting with the Taliban delegation on July 28 mentioned earlier, Wang Yi said:

— The Eastern Turkistan Islamic Movement (ETIM) is an international terrorist organization designated by the UN Security Council that poses a direct threat to China’s national security and territorial integrity. We hope the Taliban will make a clean break with all terrorist organizations including ETIM and resolutely and effectively combat them to remove obstacles, play a positive role and create enabling conditions for security, stability, development, and cooperation in the region.

The Taliban responded as follows:

— The Afghan Taliban will never allow any force to use Afghan territory to engage in acts detrimental to China. The Afghan Taliban believes that Afghanistan should develop friendly relations with neighboring countries and the international community.

This means that we are about to see the future that could not be achieved by the Afghan government backed up by the United States with NATO troops for 20 years (= to eradicate terrorist organizations and build a conflict-free Afghanistan) might be achieved by China joining hands with the Taliban.

If China achieved the eradication of terrorist organizations, the rehabilitation of Afghanistan’s economy, and its return to the international community, the world might regard China as more capable of governance. In other words, there might be another “appalling reality” lying on the ground that the U.S.-China power relationship might be reversed by the Taliban.

Today, August 15, is the day World War II ended. On the eve of the war’s end 76 years ago, soon after the news that the Soviet Union had entered the war, the Kwantung Army stationed in Changchun (then Hsinking direct-controlled municipality, Manchukuo) abandoned the unarmed settlers and other Japanese residents and quickly ran away southward to Tonghua. At that time, I was living very close to the Kwantung Army headquarters, and I was one of people who saw smoke from documents burnt at the headquarters. When I see the confusion of Afghan citizens left after the withdrawal of U.S. troops, I remember my anxiety and despair in those days.

This article is an English translation of the article on August 15th.