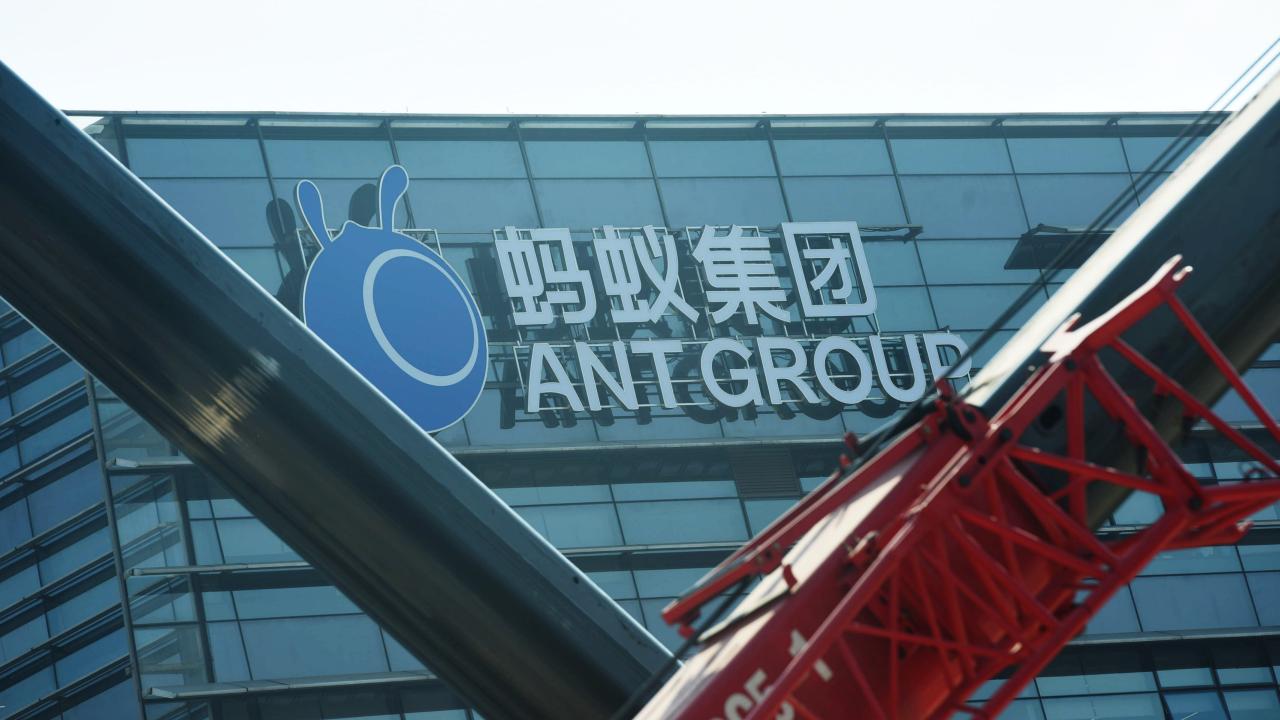 A view of the signage of Ant Group in the headquarters compound of the fintech giant in Hangzhou in east China's Zhejiang province Wednesday, Nov. 04, 2020. China pulled back the IPO of Ant Group two days ahead of its listing in Shanghai and Hong Kong as a recent microloan regulation will affect its core business. (Photo：Featurechina：Featurechina/アフロ)

1. Warning signs of “Predatory Economics” spread globally and through China

As the trade war continues, United States Secretary of State Mike Pompeo has denounced the Chinese government as the world’s greatest intellectual property thief, akin to “predatory economics 101”, to an unprecedented extent. China has exported labor, technology and products through its Belt and Road Initiative, which has impacted small and medium-sized enterprises in countries along the initiative’s routes. “Made in China (MIC)” products are proliferating throughout the global market and even enterprises from the United States, Japan and the European Union are having a hard time competing with Chinese companies. To give one example, to relieve the internal pressure from global steel and aluminum over-capacity, the Chinese government subsidizes state-owned enterprises in the sector, enabling them to sell at discounted prices, which affects market prices and monopolizes the world steel and aluminum market.

After China signed the RCEP treaty in 2020 it expressed its intention to join the CPTPP. The recent announcement about opening up its economy and globalization has raised suspicions that China is moving towards globalized “predatory economics”, while it has also embarked on a series of domestic predatory economical tactics. These include the expulsion of the “low-end population” from cities in 2017, the wave of closures of P2P online lending platforms – the home for middle class investments – the disregard for local governments’ large issuance of local bonds, the planned suppression and absorption of private and private enterprises capital under “Guo jin min tui” (the state enterprises advance, the private sectors retreat), as well as the sudden suspension of shares in “Ant Group”, which triggered a conflict between influential factions of party-state dignitaries. All these examples indicate that “predatory” state capital conflicts are occurring within the CCP.

2. Eliminating the “low-end population” in cities

When a fire broke out in Xihongmen Town in Beijing’s Daxing district on November 18, 2017, migrant workers from inland provinces in low-cost apartments on the periphery of the city were expelled in the middle of a harsh winter rather than being aided by the government. These expelled migrants were mostly the “low-end population,” which refers to under-educated, low-income, unskilled workers who serve urban residents’ needs, such as transportation, construction and delivering food and drink.

This group of poor migrant workers from outside the city meets urban labor market needs; however, it also creates more congested cities and residential building problems. In the face of all the strict urban-rural household registration system restrictions, these workers are trying to live an “American dream” in the hope that one day they will be able to settle permanently in the city.

The eviction of Beijing’s “low-end population” along with controls or compulsory regulations was initially a simple urban renewal process. However, the locations these people previously occupied were soon taken over by construction companies, demonstrating that removing the “low-end population” is not preparation for cleaning up the city: it is a precondition for creating greater building opportunities for construction companies.

Even though the authorities have repeatedly stated that they have never expelled the “low-end population,” the general populations are well aware that Beijing’s policy of “cleaning up” the migrant population may be social Darwinism program. It quietly “cleanses” the unskilled labor force outside the capital.

As the Chinese government’s de-leveraging and strong regulations progress, asset bubbles are slowly appearing, and trillions of dollars of private wealth face the dilemma of lack of homes for investments. Buildings in Beijing, Shanghai and Guangzhou have been flipped to astronomical levels, and even second-tier cities’ buildings are unaffordable. The search for new investments has become a national quest for China’s middle class, who particularly head to P2P online lending platforms for small investments that can be deducted over the cell phone platform network, with regular fixed amounts, but offering 10% or similarly high returns on investment.

The current one-year benchmark deposit rate in China is 1.5%, money market funds offer about 4%, and some banks offer large deposit certificates at rates as high as 4.2%. Domestic trust products offered at least a 6% return in 2017. Compared to banks and financial institutions’ returns in other countries, a guaranteed 10% profit is not a good investment.

However, since 2018 these companies have not been guaranteed to make a 10% profit, leaving many middle-class people who regularly invest in these venture capital companies devoid of their investments and suffering severe losses. In an attempt to bridge the capital gap, companies have also invested in highly leveraged bonds issued by SOEs (State Owned Enterprises). They became the victims of the capital crunch that arose from the U.S.-China trade war.

The “hundred years of prosperity” coupled with the “dream of getting rich” has created a nightmare for the Chinese middle class who want to invest in becoming rich. Ignoring the people’s complaints, the Chinese government has allowed these P2P online lending platforms to close without warning, leaving Chinese private enterprises and investors facing a “financial shuffle.”

2020 will see greatly increased global debt. According to IMF projections, major countries will incur a record high of $12 trillion in debt this year. According to Wind Data, as of November 30, RMB 6.26 trillion of local bonds have been issued in China. With the upcoming issuance of RMB 200 billion of special bonds for small and medium-sized banks, a record high of RMB 6.5 trillion in local bonds will be issued in China over the year.

To resolve the local fiscal gap, local governments planned to issue new local government bonds on a trial basis. While other countries “encourage people to store wealth,” China’s has opened up sales of local bonds to the public, but then found that these bonds do not sell well. Local governments are desperately trying to issue bonds when they cannot find buyers for local bonds, which is bound to trigger a domino effect.

During Xi Jinping’s visit to Northeast China in 2018, he inadvertently revealed the CCP’s desire for private enterprises, especially those doing poorly, to exit the market in favor of SOEs. China’s rare elimination measure aimed at the market economy reflects a turning point in Deng Xiaoping’s Chinese economic reform, emphasizing a free market economy.

In Deng Xiaoping’s southern tour, local economies were encouraged to improve, and private enterprises were accelerated to flourish, while on the other hand inefficient SOEs withdrew from the market. Many private companies and small and medium-sized enterprises created during Deng Xiaoping’s Chinese economic reform program have been taken away, step by step, by the CCP.

Many private companies that raise capital from IPOs now find it a greater challenge to borrow money than before because their stock valuations have halved. In particular, due to the sharp decline of China’s A-shares, many listed companies are now facing assessments by banks for their corporate stocks, which were initially used as collateral for loans. When the stocks fall to a specific price, these loans are called in, meaning the A-share private companies are undergoing a nationalization catastrophe. When stock market values plunge, many listed companies run the risk of being repossessed by large state-owned banks.

Even though the CCP authorities want to unhesitantly “encourage, support, guide and protect” development of the non-public economy, it is already seen as a “strategic response” to the recent panic of “the state sector advances, the private sector retreats” in China. Private enterprises are not growing as expected and there is a prospect of unemployment rising in the country, so the Chinese government has to take harsh measures to exclude private enterprises. Does this mean China is going to retrace its steps?

The world’s largest super-unicorn and most valuable start-up, “Ant Group” (also known as “Ant Financial”), estimated to be worth up to $200 billion, was due to be listed simultaneously in Shanghai and Hong Kong on November 5, 2020. However, before it was listed in Hong Kong, Jack Ma and other party capitalists were arrested. This alerted everybody that Xi Jinping has decided to break with the Shanghai clique and seize the “money bag” in advance.

During the 19th Politburo Standing Committee (PSC) in 2017, Xi Jinping was re-elected as the General Secretary of the CCP, with full control over the list and ranking order of “PSC members”. The 18th PSC, thanks to the anti-corruption efforts of Wang Qishan from the Central Commission for Discipline Inspection (CCDI), has ended temporarily. In the 19th PSC, after ensuring “military force” and strictly controlling “freedom of speech,” Xi Jinping sharpened his knife to reinforce his anti-corruption efforts and launch financial reforms to target the “money bag.”

It was expected that seizing the “money bag” would begin at the 20th PSC, Xi Jinping’s next term. However, for billionaire Jack Ma, the financial oversight mechanism of the “Financial Stability and Development Committee” (similar to Taiwan’s Financial Supervisory Commission) was not even on his radar. On October 24, on the eve of Ant Group’s IPO, at the Shanghai Financial Summit, Jack Ma said he wanted to help China solve its financial problems through innovation, and he criticized China’s increasingly stringent financial regulation, saying it hindered technological innovation. “Innovation without risk means eliminating innovation, and controlling risk to zero is the riskiest thing to do. “

As a result of the government and the people’s struggle, “Ant Group” became “A group without Jack Ma.” After several months out of sight and silent, Ma finally withdrew from the “Ant Group” management team. The secretary of the Hangzhou Committee of the Communist Party of China appointed the appropriate business organization to run the board of directors instead. Once “Ant Group” is integrated into the national capital system, its public listing is expected to take place shortly after.

The in-fighting between the CCP and the former party-state dignitaries who monopolized capital is just beginning. The relisting of “Ant Group” reflects the fact that Xi Jinping has taken full control and is ready to confront the Shanghai clique that heads up the banking and financial system. Three extreme phenomena are foreseeable in China: 1) Xi Jinping’s may seize power and eliminate the Shanghai clique, 2) the reverse may occur: Xi may become the scapegoat for China’s economic slowdown, reflecting that he is not in control of the levers of power, and 3) the vicious struggle between the New Zhijiang Army and Shanghai clique may have a more severe impact on China’s underground financial sector.

The competition for the “money bag” will become a significant indicator of China’s future political and economic development.