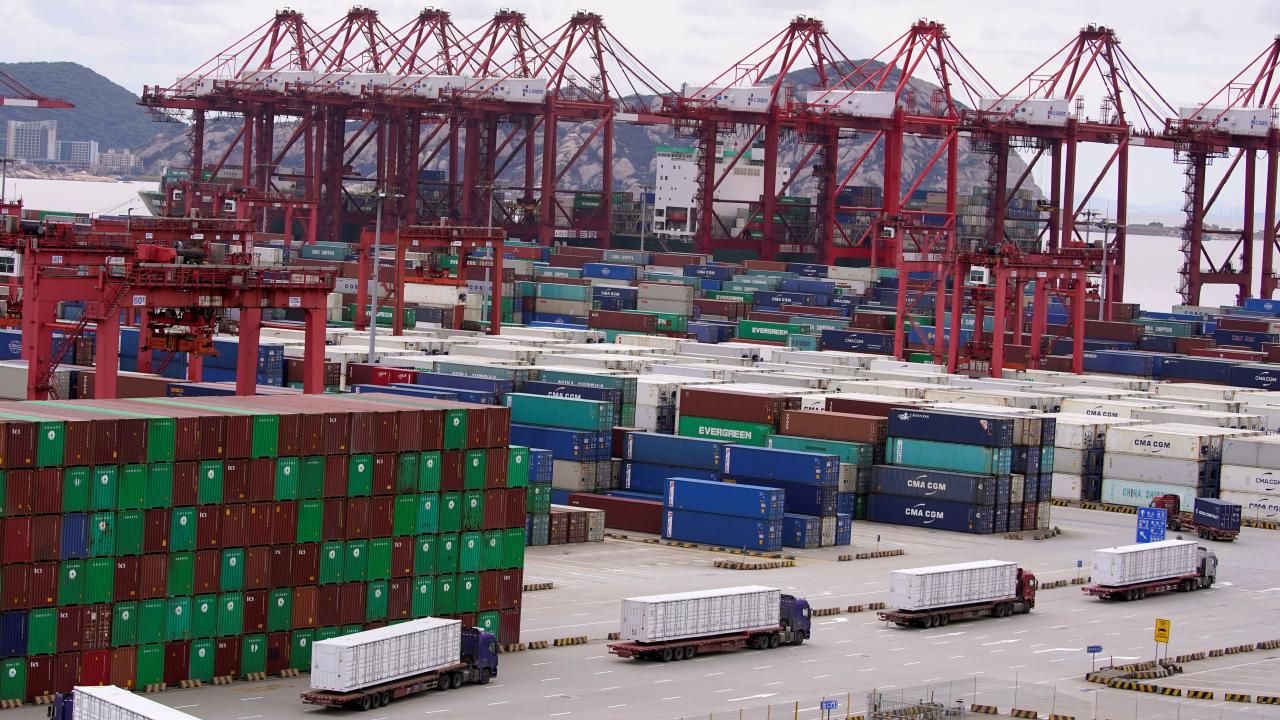 Some observers say that China has decided to adopt a strategy centered on domestic economic circulation because of the U.S. containment of trade with China. While this view makes some sense, it doesn’t tell the whole story. From the time of China’s reform and opening-up in the 1980s to 2010, China had implemented a strategy centered on foreign economic circulation for around 30 years. China’s dependence on foreign trade reached 73.50% in 2007, and then declined in 2010 after the 2008 global financial crisis, but still stood at 48.95%. From 2006 to 2015, around one-third of all trade disputes in the WTO involved China. These disputes occurred because rapid increases in Chinese exports carved out dominant positions in other countries’ markets, triggering trade friction with China.

In 2019, China’s foreign trade dependence had decreased to less than 33%. The country’s export dependence had dropped to less than 18%. These decreases in China’s foreign trade dependence, particularly its export dependence, made it objectively necessary for China to pivot to a strategy centered on domestic economic circulation. China has an immense population, enormous markets, a complete industrial system and a strong agricultural production and supply capacity. The country possesses all of the conditions and capacities necessary to implement and realize a strategy for domestic economic circulation. At this time, China’s per capita GDP has reached US$10,000. According to McKinsey & Company’s China consumer report 2020, China’s consumer market will have surpassed the combined consumer markets of Europe and the U.S. by 2035. At that time, domestic economic circulation will have become standard in China, as it is today in developed countries such as European nations and the U.S. Looking at the trajectory of development in developed countries, per capita GDP of US$10,000 marks a turning point. From an objective perspective, economies that reach this turning point find that they must gradually transition from a development model centered on exports to one centered on internal circulation.

Of course, China’s current regional economic development is uneven and requires foreign circulation. However, the U.S. containment of trade with China and the strategic games between the U.S. and China have objectively accelerated China’s strategy centered on domestic circulation. As the Chinese proverb says, “Inscrutable are the ways of heaven.” In the long run, negative events can turn out to be blessings in disguise, and vice versa. This type of external pressure on China will likely raise the bar of the country’s science and technology, industry, and other industrial structures to a whole new level. While it is unclear whether this will be beneficial to the global economy, it will certainly have a profound global economic impact and could potentially alter the structure of the global economy.

The greatest challenge facing the Chinese government, or the goal it must work to achieve, is to transform its current hourglass-shaped society into an olive-shaped society. Looking at China’s social structure, China’s social hierarchy has what can be described roughly as an hourglass shape. The upper bulb of the hourglass represents 400 million people who live primarily in first-line and second-line cities. They are part of China’s affluent and middle classes. These consumers own automobiles and homes, and have ample means to pay for goods and services. This tier consumes 60% of the world’s luxury items and 50% of the world’s automobiles. It purchases all of China’s mid-level and high-end homes. The neck in the middle of the hourglass represents around 100 million people who live primarily in second-line and third-line cities. Their income lies between the middle and lower classes. The lower bulb at the bottom of the hourglass is fairly wide, representing a population of 900 million people. These people live mainly in farming villages, and towns and small cities. Their income and spending power are not high, but they are able to live with a bare minimum standard of living under China’s system of socialism. Currently, China has a social structure that may appear simple at first, but is actually very complex. The incomes of the 400 million people in the upper class are on a par with incomes in developed countries, whereas the incomes of the bottom 900 million people are still at the level of developing countries. The Chinese government aims to solve the problem of the income and spending power of this enormous tier of people. Solving this problem will unlock massive growth potential for the domestic circulation of the Chinese economy. Listed below are six policy measures for realizing an olive-shaped society, in order to surmount the challenges facing China:

First, domestic and foreign circulation are beneficial to the Chinese economy and the foreign economies that participate in China’s domestic circulation. In the early stage of the China’s reform and opening-up period, the Chinese economy was driven primarily by the “processing trade,” which is based on the “business of three imports and compensation trade” (the “three imports” refer to the processing of imported raw materials, manufacturing products according to imported samples, and assembling imported parts, while the “compensation trade” refers to the repayment of loans for imported equipment and technologies with products) and the principle of “imports and exports are both based overseas” (meaning both raw materials markets and selling markets are located in the international market). Of the production output of 100 billion, China’s real GDP is only 12% and 80% of components and raw materials come from overseas. Accordingly, China had only earned a processing fee of around 10%. If the raw materials are sourced domestically, China’s earnings will likely account for at least 30% to 33% of the production output in the domestic circulation. If Apple does not manufacture smartphones in China, it could possibly go out of business. Apple’s smartphone sales in China represent more than 30% of its overall sales. If foreign investors are told that China’s processing industry and its products account for around one-third of global market share, foreign capital will likely be unable to pull out from the Chinese economy. The reason capital flight will not be possible is that overseas, governments cannot dictate where capital flows. Outside of China, it is capital that directs governments. Foreign governments are unable to direct private companies or their capital. The question of who market share will belong to will be determined by who comes to China as an investor and invests in the market. Since capital seeks financial returns, as long as there is a market, there is no need to worry about capital not flowing into the country. For these reasons, in my personal view, no matter how much the U.S. government may interfere, as long as there is no change in the fundamental fact that capital seeks financial returns, it will be impossible to completely cut off the Chinese market from the rest of the world.

Next, once China fully develops the potential of a market centered on domestic circulation, imports will become even more crucial to the country. Massive imports would be an indicator of China’s level of globalization, the level of affluence of the Chinese people, and their ability to consume products from around the world. Meanwhile, massive imports will also help China to lay a foundation to become a global superpower. Among today’s developed countries, no country has become a developed country with only an export-oriented economy. Internal demand attracts and absorbs capital and relatively high-quality products from various countries like a magnet, and strengthens high-end industries and products. That process will help China to build up a foundation as a global superpower and strong nation. The U.S. is the world’s No. 1 importer. In 2019, U.S. GNP amounted to US$21.5 trillion, with exports representing only 19.5% of the whole. Over the past 10-plus years, the U.S. has continuously maintained this percentage of exports relative to GNP. In EU countries, exports and imports represent 60% of the economies of each country, when calculated independently. However, if you consider imports and exports within the EU to be part of the internal circulation of the economy, exports to countries outside the EU represent only 22% of the whole. In Japan, exports accounted for 50% of the economy in the 1950s. Subsequently, the country shifted course and exports have now settled down to a percentage of around 25% of the economy.

At this stage, the Chinese economy is still highly export-oriented. In the next 20 to 30 years, China will surely become a global economic superpower. The path for China to become a great power will not be realized by closing off the country to the world and relying only on a domestic circulation. Rather, China’s path to a global economic superpower will require the country to support efforts to open up to the world and promote globalization through the mutual interaction of dual circulations, with an open domestic circulation as the mainstay, augmented by a foreign circulation. Importing a massive amount of products from other countries will elevate China’s stature in international markets, reduce trade friction, and increase its influence on the world stage. China’s goal for globalization is to establish the renminbi as a global currency for settling transactions. This can be accomplished by obtaining the pricing power and negotiation leverage that comes with being the world’s largest buyer of goods and services. In this sense, the domestic circulation will serve as the foundation for the foreign circulation. The mutual interaction and fusion of these two circulations will guide China to its final goal of becoming a great power.

In closing, China will implement a strategy centered on domestic economic circulation, augmented by foreign circulation. The implementation of this strategy will enhance the independence and security of the Chinese economy, and remove the risk of the economy being controlled by external forces. It will also encourage companies to achieve technological advancement, paving the way for China to establish a dominant leadership position in R&D for core devices. China must capture the opportunities presented by the Fourth Industrial Revolution, develop new infrastructure, and strengthen science and technology, particularly R&D and product development in core industries, high-tech industries and basic sciences.