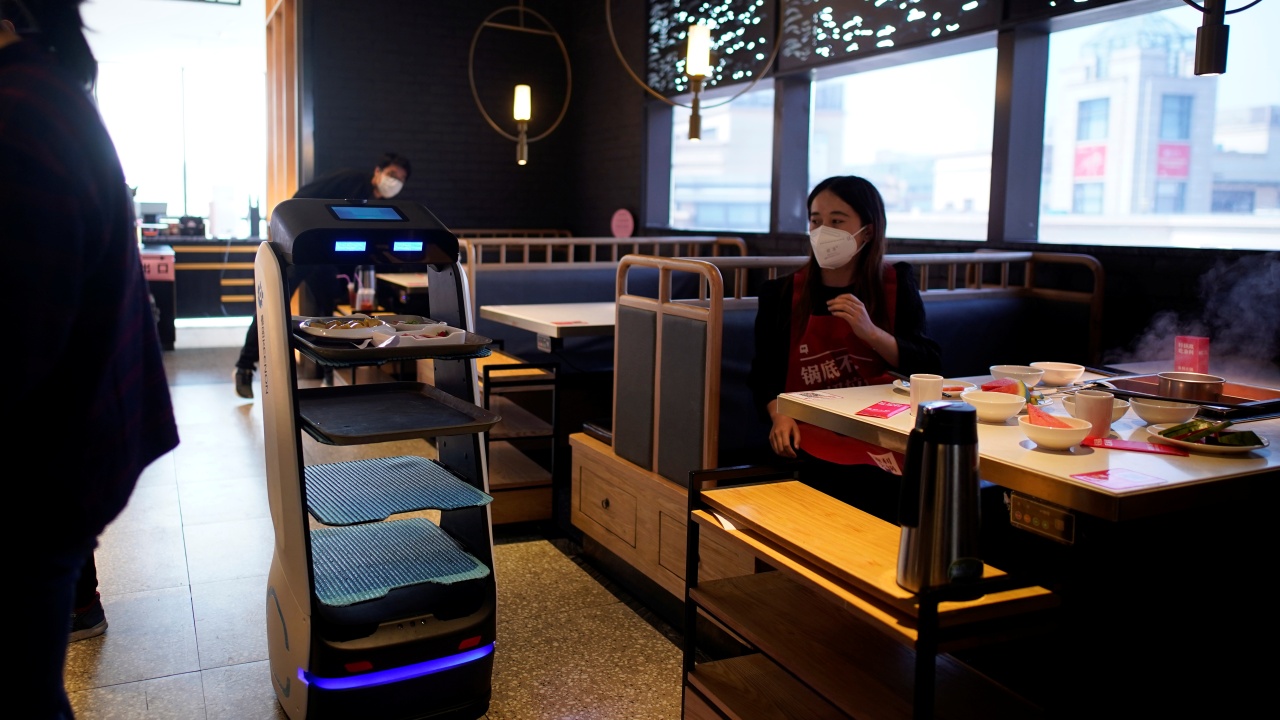 A robot transports food to serve to diners at a restaurant, following an outbreak of the novel coronavirus disease (COVID-19), in Shanghai, China March 19, 2020. (Photo Provided by REUTERS/Aly Song)

On February 23, President Xi Jinping released an important statement at the Conference on Prevention and Control of the Outbreak of COVID-19 and Economic and Social Development Tasks. President Xi announced a “Two-pronged Strategy” to stabilize the employment rate, external trade, foreign investment, and people’s lives by restarting production precisely with zoning and grading while strictly control and prevent the spread of the disease. This policy may suggest the systemic superiority of the Chinese government, expressed as “Work together on a big project,” while leaving minor issues to the adjustability of the market mechanism. Under this strategy, the Chinese government intends to integrate its macro control and the adjustability of the market mechanism.

1. The Two-pronged Strategy suggests the systemic superiority of China, which can use the ability of the government and market simultaneously.

As is known globally, the Chinese government’s macro-control ability is overwhelmingly powerful, and what is explained by the saying “Work together on a big project” is the superiority of the Chinese system. This has been proven throughout the process of preventive action against the epidemic of the new coronavirus. However, everything has pros and cons. The government, or a powerful “visible hand” may, under an appropriate decision-making, work together to maintain the current status and achieve something important, while sacrificing a part of individual profit. However, the government cannot replace the market, or the “invisible hand.” This is because the government cannot cover minor issues of diverse, multi-layered demands of a vast number of companies and consumers from all directions.

The Chinese government rapidly integrated national medical resources to send 42,322 medical staff to Wuhan and constructed a hospital in as few as 10 days during the outbreak. The government also mobilized the military to construct another hospital, took over the management of two existing hospitals, Leishenshan Hospital and Huoshenshan Hospital, and announced a lockdown and restrictions on citizens going out. However, people’s daily lives, distribution of goods and services, restarting of production in the corporate sector, and production and business activities of individual business owners are not fully manageable by the “visible hand” of the government. To this end, the government is taking preferential measures, such as tax reductions, rent reductions, and special purpose loans, to encourage each microeconomic entity in the market to exert their vitality. The measures are expected to recover the soundness of the social economy and protect people’s daily lives effectively. However, there is a dilemma because lockdown is critical to contain the coronavirus, but it also limits distribution, which is necessary for the restarting of production in the corporate sector. The government is exerting wisdom and managerial ability to break out of this dilemma. By implementing strict lockdown in an area severely hit by the epidemic, and simultaneously resuming distribution activities in the other areas, the government is carefully choosing which areas to resume production activities and in what status, a result of perfect cooperation between the government and the market. The Chinese government containing the infectious disease despite high costs is a manifestation of its political philosophy that places great emphasis on “human rights,” and at the same time suggests the strength of the government’s management ability. The “Two-pronged Strategy” has embodied the boldness, determination, wisdom and ability of the Chinese government.

The “Home-based economy” originated in Taiwan at the time of the financial crisis in 2008. Advertising research by Shanghai Tianlian in 2009 suggested that the Home-based Economy has emerged in many leading metropolises and lesser cities, providing a breakthrough for new economic growth in an era of economic stagnation. In fact, even without the financial crisis, the Home-based Economy would have emerged. Working from home, working online at home, side businesses, and having one’s own business will continue to grow undoubtedly. During the new coronavirus epidemic, people carrying out “social distancing” have been creating new jobs and have become the catalysts of economic growth, making Home-based Economy one of the coolest online buzzwords. In the future, more and more “socially-withdrawn people” will be able to change their career plan by working online at home. Some companies are also switching their business model from a centralized business center model to a distributed working-from-home model.

The Home-based Economy including online operations, online healthcare, online education, video fitness programs, and online classrooms, is driving the sales of related electronic products. Sales volumes of computers, tablets, and printers that are needed for studying are growing rapidly, according to data from Suning.com. Printer sales alone grew more than 200% year on year.

The Cloud-based Economy uses the computing and storage facilities of ultra-large cloud-based service centers via the Internet and telecommunication networks, to provide data sharing and exchange among governments, enterprises, and individual consumers around the world in a low-cost, highly efficient, and practical manner. This is an independent economic model as well as an infrastructure and technological platform for blockchain and the Home-based Economy. In 2012, the Ministry of Science and Technology of China formulated “The 12th Five-Year Plan” on the country’s cloud science and technology. Cloud applications, cloud data, and the cloud industry have already grown to a scale large enough to support the Home-based Economy.

The Multi-domain Economy refers to an economic model of investment that straddles multiple domains. Cross-domain investment is a preferred choice of investment among internet giants: Jack Ma investing in the financial sector; Apple, Facebook, and Google investing in new energy businesses, which belong to emerging industries with growth potential in general. Due to the epidemic of the new coronavirus, the Home-based Economy will gain support from a considerable number of investors. Chinese dairy product manufacturers such as Shanghai Guangming, Beijing Sanyuan and Sichuan New Hope engage in home delivery of dairy products despite the severe situation facing the logistics sector due to the epidemic of the new coronavirus, while at the same time developing distribution of fresh foods from other industries. Orders have grown sharply, driving the growth of dairy product sales. The Home-based Economy will create a variety of new industries. Depending on the nature of investors, such industries can be categorized as the Internet Industry, Digital Economy Industry, and “Internet PLUS Traditional Industry.”

3. The “Two-pronged Strategy” has embodied the perfection of the system and the strength of flexible innovation of China’s manufacturing sector.

Amid this epidemic, masks and medical protective clothing are needed most. As of February 15, in China, there are 358 medical mask manufacturers and 44 medical protective clothing manufacturers. Of which, 56 companies produce medical protective masks, 149 companies produce surgical masks, but only 22 of the companies produce both. China’s total production volume of masks exceeded 5 billion in 2019. To fill up a deficiency in production during the Chinese New Year season, the government urged a military supply company to revamp its plant to fill the urgent need for medical supplies. As of February 5, the plant produced 7,850 sets of protective suits on an 8-hour schedule. From February 16, the plant has operated on three shifts to produce 45,000 sets per day, which accounts for one-third of the country’s total production of medical suits.

In addition, over 100 million masks and over 1.66 million medical masks are produced per day as of March 5, filling the need to protect medical staff on the front lines effectively.

During the fight to contain the epidemic, China had tremendous support from many countries. An old Chinese saying goes, “Mountains and rivers may locate in different regions; but the moon and wind must share the same heavens.” After conquering its challenge, China is now willing to offer its utmost assistance to other countries in order to contribute to protection from the epidemic around the world.